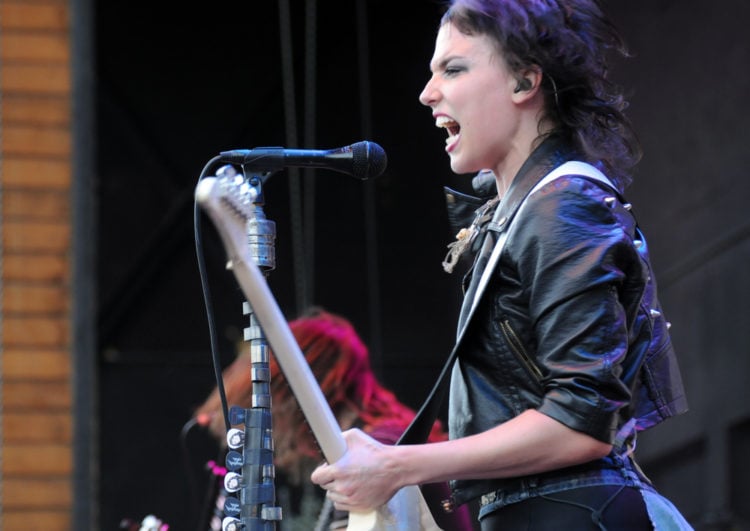 With powerhouse vocalist Lizzy Hale leading from the front, Halestorm have become one of the biggest female-led hard rock groups of the last few decades. Known for their attitude-laden rockers and hook-heavy ballads, they’ve drawn critical acclaim and commercial success in equal measure. Here, we take a look back at some of their finest moments with our pick of the 10 best Halestorm songs of all time.

Halestorm dropped their self-titled debut album in 2009. It may fall short of their best work, but as returnofrock.com says, the crunching guitars and abundance of hooks make it worth the spin. One of its chief highlights is It’s Not You. A wicked rocker with cowbells, pulsating beats, and a ton of attitude, it spelled out exactly what the world could expect from Halestorm. Released as the second single from the album, it hit number 24 on the US Hot Rock & Alternative Songs chart.

As Loud Wire points out, while the band may have released bigger rock hits, no song has helped Halestorm reach a broader audience than Here’s to Us. Its barroom country soul influences appealed to fans outside the rock genre (so much so, it even got covered by the cast of “Glee”) but it still had enough attitude and intensity to please the band’s existing fan base. During an interview with Rolling Stone, Lizzy explained the song’s special significance to the band: “We wrote this song literally as our personal anthem,” she said. “We’ve been through a lot together as a band, and we’ve learned to celebrate the low times as well as the highs. It’s about toughin’ out and respecting the journey for us, and that’s how we have kept it together as a foursome for 10 years! Here’s to us!”

Uncomfortable was released on May 30, 2018, as the lead single from the band’s fourth studio album, Vicious. Inspired by Lizzy’s struggles with forging her own path while trying to keep everyone around her happy, it calls on the listener to stop wasting their time trying to please people and focus on what makes them happy instead. Described by Metal Injection as having “all the ingredients for a great pop metal song that will surely be all over rock radio and Sirius XM Octane all this summer,” this blistering, high octane number became one of the band’s biggest successes, charting at number 28 on the US Hot Rock & Alternative Songs chart and number 17 on the US Rock Airplay chart. It also managed to snag a nomination for Best Rock Performance at the 61st Annual Grammy Awards.

Halestorm’s secret weapon has always been Lizzy Hale, whose powerhouse vocals put the band in a different league to most of their peers. On In Your Room, she shows off her vocal dexterity with a wonderfully passionate performance that showcases her ability to convey emotion without becoming overly dramatic or theatrical.

According to Genius, Amen is about personal freedom, the fact that your life belongs to you alone and no one else. Either way, it’s a slow-burning classic, building from a soulful start to a rabble-rousing chorus. When Hale asks “Can I get an amen?” there’s only one possible answer. Released as the second single from the band’s third studio album, Into the Wild Life, Amen topped the US Mainstream Rock chart and reached a respectable number 19 on the US Rock Airplay chart.

According to Lizzy, Mz. Hyde reflects the two, often opposing, sides to her life – the public persona she presents to her fans, and the private person she is off stage. “For years I’ve been writing about these two sides of myself, and I wanted to capture that in a song,” she’s explained. A headbanging, fist-pumping rocker bristling with thunderous drums and mindblowing riffs, the song reached number 15 on the US Mainstream Rock chart on its release in October 2013.

Laden with hooks, dripping with attitude, and featuring a vocal performance worthy of Pat Benatar, Apocalyptic delivers everything the listener could want from Halestorm, with a whole lot more besides. Released on January 12, 2015, as the lead single from the band’s third studio album, Into the Wild Life, the song hit number one on the US Billboard Mainstream Rock Songs chart and number 18 on the US Billboard Rock Airplay.

Next up on our list of the best Halestorm songs of all time is the band’s debut single, I Get Off. An instantly catchy ode to voyeurism with slow-building verses, soaring choruses, and face-melting vocals, the song gave the band their first top ten single, reaching number 6 on the Billboard Mainstream Rock airplay chart. It also became their only single to ever reach the Alternative Airplay chart, peaking at number 28. It’s since been certified gold by the RIAA after shifting over half a million copies.

If you’re looking to rock out, Freak Like Me, the band’s third single from their 2012 album The Strange Case Of…, won’t disappoint. A heavy, attitude-laden anthem that commands every freak and geek in the world to “wave your flag” and “let it all hang out,” it’s one of the most aggressively catchy tunes in the band’s arsenal.

In at number one is Love Bites (So Do I), the beat-heavy, unapologetically brazen opener to the band’s second album, The Strange Case Of… . A metallic assault on the senses that showcases Lizzy’s inimitable vocals, it sums up everything there is to love about Halestorm in three minutes of hard-rocking perfection. Released in January 2012, it hit number 2 on the US Mainstream Rock chart before picking up the award for Best Hard Rock/Metal Performance at the 2013 Grammys.