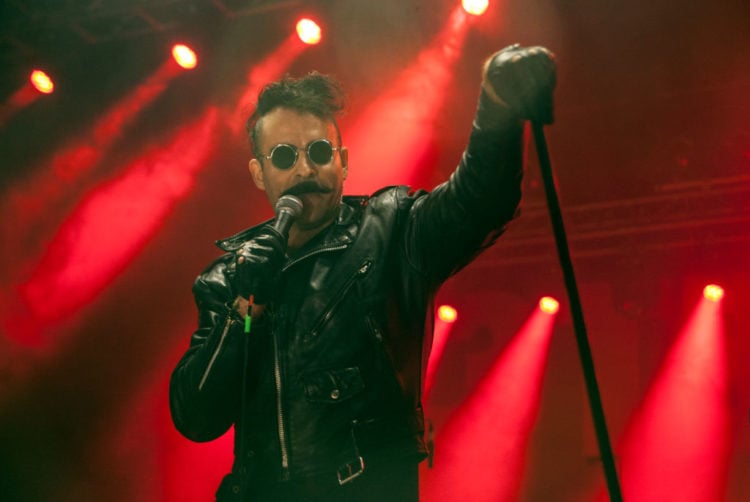 Despite the inherent heaviness of the alt-industrial sound of 3Teeth, it actually began as a fun idea for mixing visuals and music. The bands’ founding members Alexis Mincolla and Xavier Swafford, met at a party Mincolla hosted weekly and ended up talking about their ideas, which, at the time, didn’t particularly lean toward starting a band. Other members came later with their own contributions, but by 2014 they released a self-titled album that hit the top ten on the iTunes Music chart, and their career was off and running. Considering they didn’t initially plan to be a band, the top ten best 3Teeth songs of all time are even more impressive.

With their signature wicked, trippy, and violent visuals, the video for Consent is a perfect introduction to 3Teeth for new listeners. Heavy drumlines and distortion mark this industrial sound making it almost jarring despite the fantastic beat. Raw vocals and creepy smiley-faced people make this disturbing spectacular utterly clear. You are being brainwashed, and you aren’t even fighting it. Though this isn’t a multimillion-dollar Hollywood-saturated luxury fest of a song and vid, it’s truly exceptional work. You can see the bands’ roots of visual dynamism combined with evocative, harsh music.

Simple lyrics belie the complexity of this song. Master of decay is a self-explanatory title. The well-composed, well-arranged drum and guitar-heavy song conveys exactly what it means while remaining remix and dance-worthy. The singer’s voice could not be more apropos for the type of music. Alexis Mincolla sounds industrial. There’s an eerie quality in the synth that elevates this song without overwhelming.

Atrophy could be a song about the end of a relationship or how stars come to feel about ever more demanding fans. Whatever the actual intent, the song is very clear that the singer isn’t saving anyone, least of all himself. With an overarching theme of losing it amidst the demands of others and feeling disconnected, this song stays true to the genre and the band while also being distinct. The heavy, distorted guitar and synth tune is reminiscent of the club and raves hits from the early days of the industrial genre.

The melodic lyrics of Pit of Fire show that 3Teeth is capable of more than merely reproducing ‘industrial’ music. The overlaying themes of sin and desire are a backdrop to some of the band’s more innovative sounds. While this song doesn’t lose the rage and fire that defines 3Teeth, it shows us again that they are a multifaceted group with a lot to offer.

By far the simplest lyrics 3Teeth has ever presented, Divine weapon still manages to be an outstanding staple in their discography. Using only eleven words, the song tears down the idea that a song needs to be lyrically complex to convey a deeper message.

5. You Spin Me Round

If one song could always use a remake and another cover, it’s You Spin Me Round. There was nothing wrong with the original. In fact, it lends itself to easy sampling and remixes. When it comes to mastering your craft, a cover like this shows just how good a band is. Original music is easy to make your own. However, remaking a classic in a way that makes the listener wonder how it was ever part of any other genre is on a different level. It’s hard to hear the original song after this and not wonder where the industrial overlay went.

This song is a statement. If you’re not familiar with the case of Ethan Couch, where his mother claimed in court that his illegal actions were the result of the so-called ‘affluenza,’ then you may not understand the sheer outrage behind this song. Ethan killed four people while driving under the influence, and his mom tried to claim that it wasn’t his fault because he lacked any morals due to being affluent. This was after the then sixteen-year-old and his mother fled to Puerto Villarta, Mexico, to escape the consequences of his actions. Investopedia defines the not-medically-recognized condition as the inability to recognize the societal repercussions of your actions and disbelief in the consequences as a result of wealth.

It seems almost silly to point out that the video for this song is NSFW. After all, it has XXX in the title. Nevertheless, the theme of sex, politics, and debauchery isn’t meant for every screen. Regardless of what you see on the surface, there are always hidden depths to the music of Alexis Mincolla. In an interview Kerrang points out, he (Alexis) has two degrees in political science with a minor in economics. EXXXit is about the liberation that can come with self-destructive tendencies and how blind we often choose to be even when it ultimately leads to the equivalent of self-harm. It is ironically more honest and less socially acceptable to make that choice consciously and openly.

This brilliant, dark, raw cover of a song with the same name is like looking into a distorted mirror. Pumped Up Kicks was already a brilliantly fun pop tune that stuck in listeners’ heads. 3Teeth took the vividly cheery and spun it a hundred and eighty degrees to make it into this electronic, gravelly masterpiece. They managed to keep just enough of the original to really give you an earworm. Perhaps ear-maggot would be a more appropriate term since this macabre reinterpretation is more likely to cave a niche in your skull than make some cutesy lyric loop.

It’s no mistake that a song called President X came out in 2020. The election was just about the only news anyone heard about for weeks (other than COVID19 news, of course). The theme of politicians who are all essentially the same thing in a new suit is an old one. However, it remains stunningly relevant regardless. We gave this song the top spot because any one of 3Teeth’s songs is worthy of listening to a few dozen times at leas, but this one perfectly sums up the political climate it came from and an ongoing struggle in this country.

Just four days ago, their latest collaboration working with Ho99o9, the song and video “Paralyze,” dropped. It’s easy to see that this group isn’t just on top of their game; they’re looking to continue expanding their sound. With wicked visuals and hard industrial beats, they’ve been compared to every band from Skinny Puppy to Tool, but 3Teeth is in a class of their own.