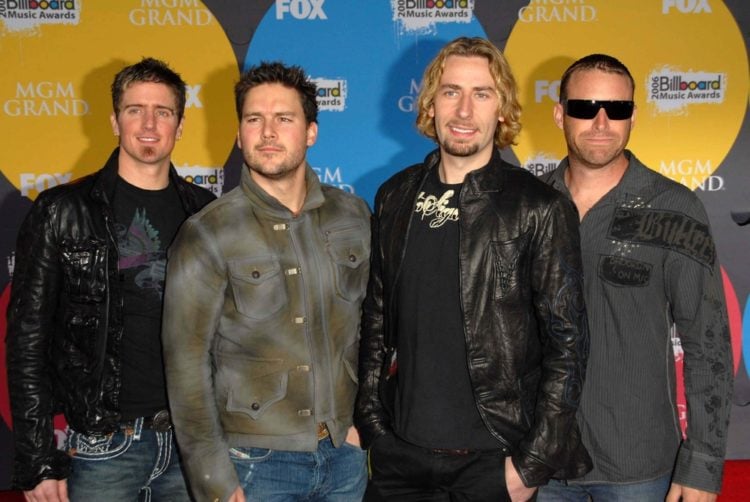 Without their fans, rock stars would still be living in their parent’s basement, eating packet noodles and praying for the day someone hands them a record contract. So you’d think they’d go out of their way to show some appreciation. Most of the time, they do. But as it turns out, even rock music stars have their breaking points. Here are 10 rocks stars who went off on fans.

Who doesn’t love Nickelback? Every single attendee at the 2002 Ilha do Ermal festival, apparently. The first time the band ever played Portugal was greeted with rocks, bottles, and boos. Tired of getting pelted, singer Chad Kroeger broke off in the middle of a song to ask, very politely, if there were any Nickleback fans in the audience. The silence was deafening, only to be interpreted when someone launched a water bottle square at his head. The band immediately exited the stage, with Kroeger throwing the middle finger to his ‘fans’ as he beat a hasty retreat.

Stage divers are part and parcel of rock shows, but sometimes, they take things too far. When an over enthusiastic Tool fan decided to give his hero a hug during the middle of Pushit, Maynard busted out his best moves, bodyslamming the fan to the ground and holding him there for the rest of the song. It wasn’t his finest moment, but it at least gave the crowd a very good lesson in the benefits of respecting other people’s personal space.

Even the nicest man in rock can get angry. As eonline.com reports, when a rowdy fan at a Foo Fighters concert in London mistook the band’s name as a call to action, frontman Dave Grohl paused the show and launched into an expletive-loaded rant that ended with the fan getting kicked out of the show. As Grohl put it (albeit in slightly riper terms), you don’t come to a Foo Fighters show to fight, you come to dance. Let that be a lesson to you.

If Dave Grohl is rock’s Mr. Nice, Chris Brown is rap’s Mr. Nasty. Unsurprisingly, he doesn’t just reserve his obnoxious behavior for his girlfriends. In 2013, he made the news (again) when he decided the right response to a male fan photobombing a picture he was taking was to punch him hard in the face. According to celebritytoob.com, Brown felt like the man was “gay” and punched him to show that he wasn’t “down” with it. Turns out juries aren’t “down” with violence – after the assault went to court, Brown got served jail time and an enforced stint in rehab.

Not a drop of alcohol has ever passed the lips of AC/DC’s guitarist Angus Young. Quite a lot, however, has been spilled over his head. During an AC/DC show in Phoenix, Arizona, a fan took exception to Angus’ riffing on Badboy Boogie and decided to express his rage by throwing a glass of beer over him. Understandably, Angus didn’t appreciate the gesture, and he pointed the guy out to security. Security failed to reach him in time, and the guy lobbed another beer grenade his way. Angus responded by furiously removing his guitar, lowering himself off the stage to meet the fan, tweaking his nose, and uttering a few choice words in his ear.

During a Rolling Stones show in 1981 at Hampton Coliseum, Keith Richards got a bit hot and decided to take off his vest. A fan decided he liked the look of the vest and jumped on stage to retrieve it. Unfortunately for the fan, that vest was one of Keef’s faves. Keith took off his guitar, gave the man a few thumps on the back with it, then put the guitar back on and carried on playing. Mick Jagger, meanwhile, barely raised an eyebrow throughout the whole thing.

Axl Rose is not a man anyone would go out of their way to annoy. Unfortunately, it’s not always easy to know what’s going to set him off. During a Guns N’ Roses concert in St Louis, Axl got properly peeved when he spotted a fan recording the concert. He called in security, but when they failed to react as quickly as he wanted, he decided to take matters into his own hands by launching himself into the crowd and tackling the fan. After that, the band refused to continue the gig because of ‘poor security,’ promoting a riot, $200,000 of damages, and a ban on the band ever performing at the venue again.

Sometimes, rock stars are jerks and go off on fans because of it. Other times, it’s the fans that are jerks. In the middle of performing Lukin during a concert in Chicago in 2020, Vedder noticed someone assaulting a woman in the audience. Grinding to a halt, he called in security and waited for them to chuck the assaulter out and check the woman was ok before continuing.

During a Festival in Norway, a fan decided to show their appreciation of Queens Of The Stone Age frontman Josh Homme by hitting him over the head with a bottle. To add insult to injury, Homme was unwell at the time, which may or may not explain what happened next. After launching into a slurred tirade, Homme invited the fan to approach the photo pit where he promptly began battering him with the bottle. The looks on the rest of the band’s faces are priceless.

When he’s not running for president, marrying/ divorcing Kardashians, or saying/ doing something equally ridiculous, Kanye West makes music. And sometimes, that means he says and does things that aren’t just ridiculous, but are downright obnoxious. During a show in Sydney in 2014, he gave a sharp reminder to the world of why we all stopped believing in Yeezus. As Huff Post reports, Kanye refused to continue the show until everyone was on their feet. Unfortunately for Kanye’s ego, one of the audience members was in a wheelchair and couldn’t oblige. Not content to let things lie, Kanye halted the performance and sent over a bodyguard to check the guy really was disabled – all the while ignoring the cries of the crowd yelling he was in a wheelchair and making wheelchair motions. Cue cringes from the audience and a remarkably unabashed Kanye.