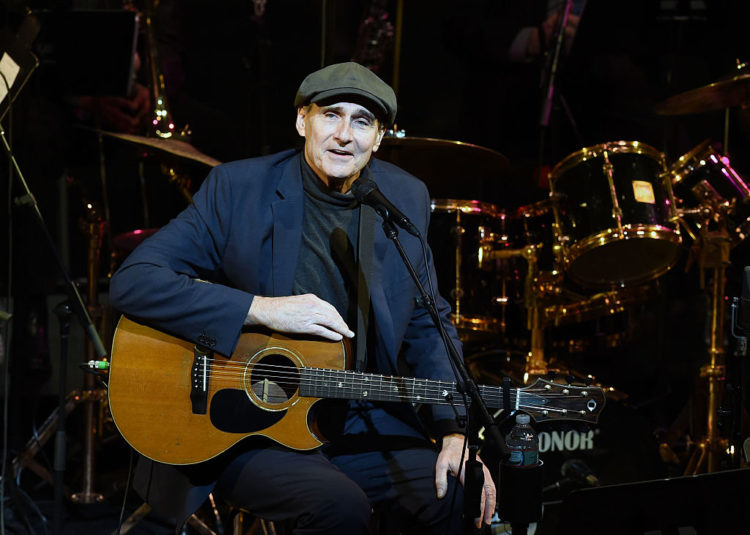 James Taylor started his career in 1968 with the Beatles’ Apple label. He was 20 years old, had floppy hair, an acoustic guitar, and a notebook full of frank confessionals. Two years later, those confessionals found their mark with the release of his second album and commercial breakthrough, Sweet Baby James. Since then, he’s been through fire and he’s been through rain, overcoming addictions, broken marriages, and personal tragedies. He’s also sold over 100 million records and become one of the most commercially successful artists of all time. These are the 10 best James Taylor songs of all time.

10. Something in the Way She Moves

In 1968, Taylor became the first non- British artist to release an album on the Beatles’ Apple label. In itself, that was significant. It was made even more so when Paul McCartney and George Harrison deigned to appear on his self-titled debut as guests. Harrison was so taken with one of its tracks, Something in the Way She Moves, he borrowed the title to open the Beatles’ chart-topper, Something. He didn’t ask before he did it, but Taylor doesn’t seem to bear any ill will, saying, “I never thought for a second that George intended to do that. I don’t think he intentionally ripped anything off, and all music is borrowed from other music. So completely I let it pass.” A spare, elegant song, Taylor’s understated delivery only seems to add to its latent power.

For all his songwriting talents, Taylor isn’t averse to the occasional cover. In 2008, he released an entire album of them – called, appropriately enough, Covers. One of the album’s standards is his version of Jimmy Webb’s cinematic country classic, ‘Wichita Lineman.’ Glen Campbell had made the song his own several decades before, but here, Taylor gives him a run for his money with his restrained, world-weary take.

Steamroller was first recorded for Taylor’s 1970 breakthrough album, Sweet Baby James, but the definitive version is the live recording from his 1976’s Greatest Hits album. A blues parody that takes a mocking look at the pomposity of the faux blues bands around at the time, it’s a very different dish to his usual introspective, singer-songwriter fare, but a very edible one at that. Elvis Presley clearly thought so too – after adding it to his live sets, he took it to No.14 on the Billboard U.S. pop singles chart in 1973.

7. Carolina on My Mind

As recording-history.org writes, Taylor wrote this ode to his home state while recording his debut album in London in the late 60s. His homesickness is obvious, with Taylor’s plaintive vocals only adding to the sense of a man adrift. Despite winning critical praise, it didn’t make a dent on the charts when it was released as a single. Regardless, it became a concert staple, with Taylor later making the wise decision to strip away the unnecessary, slightly bloated arrangement, leaving just his voice and guitar to carry it through.

Her Town Too is a joint effort between Taylor and songwriters J.D. Souther and Waddy Wachtel. Written at the point that his marriage to Carly Simon had come to a shuddering stop, people couldn’t help but wonder if lines like “She gets the house and the garden; he gets the boys in the band” were autobiographical in nature. They weren’t. Taylor may have been going through a messy breakup, but so was his friend Betsy Asher, who had recently divorced Taylor’s longtime manager, Peter Asher. According to Taylor, it was Betsy he had in mind when he crafted this tender little song about the difficulties of staying friends with both parties after a breakup.

On the surface, Country Roads seems like an ode to the pastoral. But like most songs in Taylor’s canon, what’s happening on the surface is nothing more than subterfuge. As ultimateclassicrock.com points out, the country road in question is the road that ran by McLean Hospital, where Taylor received treatment for depression five years before the release of Sweet Baby James.

The only thing better than a James Taylor vocal? A James Taylor vocal accompanied by Graham Nash and David Crosby. The C and N of CSN add some of their typical loveliness to this Latin-influenced, up-tempo escape fantasy. Taylor might have built his reputation around the image of the sad, sensitive songwriter, but when he decides to kick loose, as he does here, the results can be immense.

3. You Can Close Your Eyes

According to Wikipedia, You Can Close Your Eyes was written by Taylor for his then-girlfriend Joni Mitchell while they were staying in a hotel in Tucumcari, New Mexico. An exquisite, melodic lullaby that showcases Taylor’s prowess as a guitarist as much as a singer, it was first recorded by his sister Kate Taylor for her 1972 album, Sister Kate. Since then, everyone from Linda Rondstadt to Sting has taken a pop. Although some of them have close to capturing the magic of the original, Taylor’s is still the definitive version

2. Don’t Let Me Be Lonely Tonight

Don’t Let Me Be Lonely Tonight is a Tin Pan Alley type romantic ballad with a jazzy inflection and a narrative that breaks away from the stereotype of the jilted woman to instead cast the man as the abandoned lover. Eric Clapton later took the song in a new direction when he slowed things down and added a bluesy groove for his 2001 album, Reptile.

Sweet Baby James may have looked like butter wouldn’t melt, but at one point in his career, he made Keith Richards look like a choirboy. Fire and Rain, of all his songs, is perhaps his most personal. The first part tackles the death of one of his childhood friends. The second part deals with his attempts to overcome his prodigious drug habit and mental health struggles. The third part deals with coming to terms with fame. Three separate parts, then, but ones that blend seamlessly together to create a hauntingly beautiful song that somehow manages to be both deeply comforting and deeply sad at the same time.