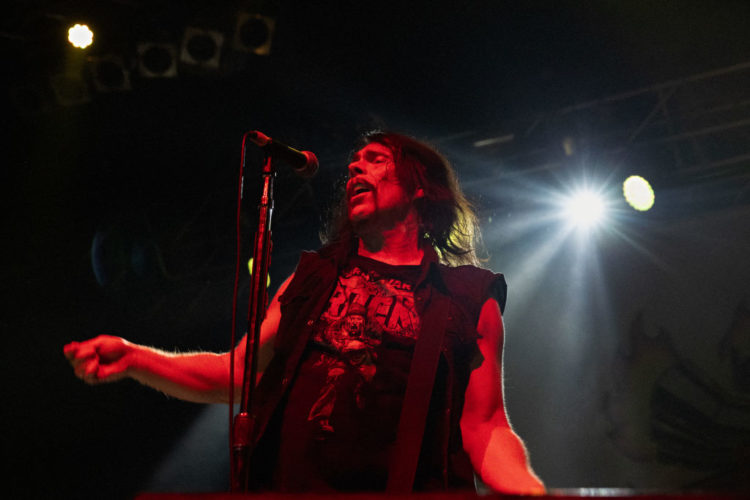 Monster Magnet have mastered the art of being in the right place at the right time. The American rock band hailing from New Jersey was formed in 1989, right after Nirvana had done the hard work and revitalized rock music. The founding members of the band included Dave Wyndorf, John McBain, and Tim Cronin. Although the band has undergone several lineup changes, Dave Wyndorf has remained resilient. He is famous for describing the band as a “Satanic drug thing,” a phrase that catapulted the band to success. To date, Monster Magnet has released a total of ten albums, and they are most famous for their 90s hit songs, including “Space Lord” and “Negasonic Teenage Warhead.” Monster Magnet have carved a name for themselves for having one of the biggest influences on stoner rock music along with bands like Sleep and Fu Manchu.

The band’s first releases were two demo cassettes, while the first official release was a song titled “Lizard Johnny/Freakshop USA.” The single and the demo cassettes were three-piece recordings before Joe Calandra joined on bass while Jon Kleiman joined on drums. The band later signed up with Caroline Records, after which Cronin left the band. However, he would be in the background and would perform in live shows. In 1991, the band released their classic album Spine of God, regarded as one of the greatest stoner rock albums. According to the band, their main musical influences come from the 1970s space rock music and pro metal bands. Some of their bands that have influenced them include Hawkwind, Deep Purple, and Captain Beyond. With that brief history about this famous stoner rock band, let’s get to the best Monster Magnet songs ever.

Starting us off at number 10 is a track from Monster Magnet’s studio album 4-Way Diablo, released in 2007. The lyrics of the song “Little Bag of Gloom” were written by Dave Wyndorf where he talks about his pessimism. The song talks about how drugs have messed up his life to the point that he first thinks he is talking to a girl but then later realizes he is yelling to himself.

Dave Wyndorf was a great lyricist. His lyrics shine through most of the band’s songs, and you can feel that Monster Magnet had a significant influence on most present-day bands. The song is about people who are halfway in the past and halfway in the future, which can be pretty scary.

“Black Balloon” is one of the easiest songs that Wyndorf ever wrote. It is the last track from the band’s second full-length album, Superjudge, which was released in 1993. In the song, Wyndorf tells the story of his show business journeys, from leaving his home in New Jersey to signing huge record deals with his band. He says that this had a significant effect on him and even resulted in him losing some of his friends.

Our number seven spot goes to “Big God,” another single from the album Powertrip, although it also appears in the “Space Lord” CD. If you want to be a fun of the group even without listening to any other song, you should listen to this hit.

Powertrip is one of those essential albums you have to listen to if you are a rock fan. “Bummer” is the fifth track from the 1998 hit album, which was certified gold by the RIAA. It is the longest song in the album, going to a little over seven minutes. Dave Wyndorf wrote the song, and it is about ladies he came across while on tour in the deep South. He was angered by how the ladies behaved, looking for men and feeling guilty when they gave in to sex. He advises the ladies to take emotional responsibility.

Monster Magnet does not get the credit they deserve for their influence on stoner rock back in the 90s. The band’s 1993 album Superjudge is one of the finest produced in the early 90s. “Twin Earth” is the second track from the album which Dave Wyndorf wrote.

This track was the first successful track released by Monster Magnet. The track is contained in the band’s 1995 album Dopes to Infinity. The song was about rock musicians, and Dave Wyndorf wrote it to show that he disliked rock music that sang about sensitive issues such as depression and sadness in a bad way. The song was a moderate hit and peaked at position 19 in the Billboard US Mainstream Rock.

Monster Magnet’s ninth studio album, Last Patrol, was a return to their original roots in their style and recording. “Mindless Ones” is the sixth track off the album and runs for around five and a half minutes. The track has a 60’s garage feel with incredible vintage guitar melodies that you will absolutely fall in love with.

Dave Wyndorf wrote the song at a time when he had hurt his knee, and he had taken some time off. His record label forwarded him press coverage from Europe, where they referred to him as “Space Lord.” He vowed to release a song by the title once he was able to walk again. The track peaked at position 3 in the Billboard US Mainstream Rock and was the first music video to be aired on MTV’s Total Request Live back in 1998.

The undisputed top song in our list of the greatest Monster Magnet songs of all time is the hit song “Powertrip” from the album Powertrip. The song peaked at number 20 in Billboard Magazine’s Main Stream Rock Tracks and was the theme song for the WWE pay-per-view event “No Way Out” in 2007.