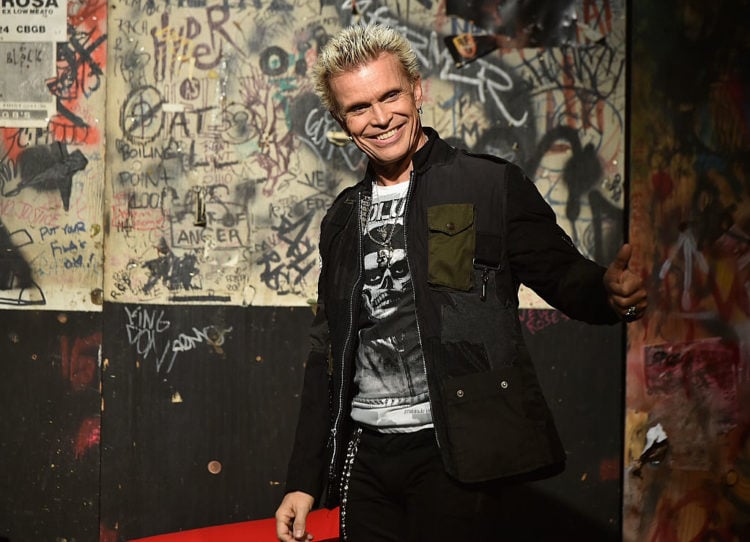 Billy Idol broke out in the 1980’s as one of the most popular musicians of the time. His music combined punk rock and glam rock influenced by mainstream 1960’s rock and roll. Idol was born William Michael Albert Board in Middlesex, England in 1955. His family moved to New York where Billy’s sister Jane was born before returning to the United Kingdom. Billy grew up in Surrey, London and Sussex. He graduated from Worthington High School for Boys and studied English at the University of Sussex. He quit school in 1976 to pursue a music career and joined the Bromley Contingent of Sex Pistols, a group that followed the Sex Pistols when they performed in London. Billy Board joined the band Generation X as a guitarist and chose his stage name based on a teacher’s nickname for him “Billy Idle”. Billy Idol eventually took over as lead singer of Generation X. The band’s music was punk rock but inspired by the 1960’s music of The Beatles and The Rolling Stones. They signed with Chrysalis Records and released three albums.

In 1981 Generation X disbanded and Billy Idol moved to New York City and started his solo career. Working with KISS manager Bill Aucin, guitarist and partner Steve Stevens, bassist Phil Feit and drummer Gregg Gerson, Billy Idol released his first studio album Don’t Stop in 1981 with a cover of “Mony Mony” and “Dancing With Myself”. The album was a hit and launched Billy Idol’s successful career. Along with his mixed style of punk and glam rock and the rise of MTV music videos, Billy Idol would continue to make albums and release popular songs accompanied by artistic music videos over the next decade. Billy Idol’s punk rock look, fist pumping and sneer attracted Gen X. Here are the 10 best Billy Idol songs of all time.

Not one of Billy Idol’s most popular hits, “Catch My Fall” does rank in the top 10. The song was co-written with Keith Forsey and was featured on Idol’s popular 1982 album “Rebel Yell”. It peaked at #50 on Billboards Top 100 Chart. The song is noted for its saxophone accompanied chorus.

“To Be a Lover” was released from Billy Idol’s 1986 album “Whiplash Smile”. The song reached #6 on the Billboard 100 Chart. It is actually a cover of William Bell and Booker T. Jones’ 1968 soul ballad “I Forgot to Be Your Lover”. That song has been covered and sampled several times. Idol’s version is heavily synthesized and reminds one of The Doors’ music. Coincidentally Idol appears in Oliver Stone’s biopic of The Doors as a drinking buddy of Jim Morrison.

“Hot In the City” is one of Billy Idol’s more laid back songs. It was released from the singer’s 1982 self titled album. It rose to #23 on the American charts and its re-release in 1987 hit #13 on the UK charts. The music video for the song features a girl in a record store picking up the album before the song plays. As the song plays the video shows scenes of New York City interspersed footage of nuclear bomb tests. With its re-release in 1987 a new video was released with an image of Idol’s girlfriend Perri Lister on a cross. That version was banned on MTV. “Hot In the City” was featured on the spinoff show of “21 Jump Street”, “Booker”, and in Tom Hanks’ 1988 movie “Big”.

“Cradle of Love” was released from Billy Idol’s 1990 album “Charmed Life”. Written with David Werner, it is one of Idol’s most popular song reaching #2 on the Billboard Hot 100 Chart. The video features Billy Idol singing in large picture frames in an apartment. The reason was he could only be filmed from the waist up having injured his legs in a motorcycle accident. The song was nominated for Best Male Video and Best Special Effects at the MTV Video Music Awards. It won for Best Video from a film, “The Adventures of Ford Fairlaiine.

6. Eyes Without a Face

Unlike many of Billy Idol’s songs, “Eyes Without a Face” has a more laid back style. Its electronically infused arrangement makes Billy Idol’s voice stand out. The Riff in the middle of the song, “Hanging out by the state line. Turning water into wine”, is less laid back. Idol’s then girlfriend Perri Lister sings backup vocals. Rare to hear a woman on a Billy Idol song, Lister sings “eyes without a face” in French. The song hit #4 on the Billboard 100 and would be one of Billy Idol’s first hits in the United States. The video was nominated for MTV’s editing and choreography awards. It features Idol’s disembodied face and him dancing in a flamed hexagon surrounded by hooded acolytes. The song uniquely features dark lyrics with ballad style music.

“Flesh For Fantasy” was a single released from Billy Idol’s 1983 album “Rebel Yell” which also included hits “Rebel Yell” and “Eyes Without a Face”. Written by Idol and Steve Stevens the song is typical of their style with energetic rock and roll style segueing into more mild new wave sounds. “Flesh For Fantasy” was notably featured in an episode of “Miami Vice” called “The Rising Sun of Death.

“Mony Mony” is a popular single released on Billy Idol’s “Don’t Stop” album in 1981 and again on his Live album “Vital Idol” released in 1987. The song is a cover of Tommy James & The Shondelles’ 1968 hit song. Billy Idol’s version of the song is very upbeat and energetic. It’s was a huge hit at his concerts and at high school dances. Who can’t remember shouting obscene lyrics during the chorus when the song was played at high school dances?

Rumor has it that Billy Idol’s 1982 hit “White Wedding” was inspired by his sister’s shotgun wedding. Although his sister was not married in a shotgun wedding, Billy Idol admits that he did think of the title when his sister got married. The song is about a man who witnesses the woman he loves marry someone else. It could also be about drugs. The song reached #6 on the UK charts and #10 on the US charts. The music video features Idol at a goth wedding. His then girlfriend Perri Lister was the bride in the video. Lister insisted she really bleed when the groom puts a barbed wire ring on her finger. “White Wedding” was featured in 1998’s “The Wedding Singer” in which Billy Idol makes a cameo. It was also featured in “My Name Is Earl”, “True Romance”, “Blackpool”, “American Horror Story: 1984” and Rock Band 2.

“Dancing With Myself” was a single off of Billy Idol’s 1st solo album “Billy Idol” and was a huge success. The title was inspired while Billy Idol was on tour in Japan with Generation X. He and bassist Tony James noticed that people were dancing “with themselves” in the mirrors of a Tokyo music club. The song was originally released by Generation X but re-released when Billy Idol went solo and remixed it. The music video on the new MTV channel was popular. Inspired by the 1971 film “The Omega Man”, it’s set in a post apocalyptic world with a man dancing on a skyscraper rooftop surrounded by mutants. “Dancing With Myself was covered by Blink 182 and is featured in 1998’s “Gia”, a 2000 episode of “Gossip Girl” and 2020’s “The Umbrella Man”.

Undoubtedly, Billy Idol’s 1983 album’s title track would define his music and is considered his best single. The energetic, “fist pumping” song did not hit the top 10 during its first release but would in 1985’s re-release. Idol has admitted he writes his song after he’s inspired by a title. Evidently “Rebel Yell” was inspired by an event where Idol was with members of The Rolling Stones who were drinking “Rebel Yell” bourbon whiskey and Idol liked the name. Co-written by Steve Stevens, “Rebel Yell” features an instrumental intro with the electric guitar but it sounds like an electric keyboard is used but it’s not. An acoustic version of the song was featured on the soundtrack of 1994’s Speed.