DEEP PURPLE affects the lives of millions of people with its music. Yngwie Malmsteen is one of them. You can find the details of the interview below.

Yngwie Johan Malmsteen, real name Lars Johan Yngve Lannerbäck, is a successful Swedish songwriter, composer, and bandleader who is considered among the greatest electric guitarists ever.

Also, Yngwie is a huge fan of DEEP PURPLE, one of the pioneers of hard rock and heavy metal in the 1960s. DEEP PURPLE has steered rock music since 1968 and has affected the lives of millions of people.

Yngwie Malmsteen recently spoke to Classic Rock. During the conversation, he talked about the importance of DEEP PURPLE to him and his favorite songs.

Yngwie’s fascination with DEEP PURPLE only started when he was very young. At that time, Yngwie, who listened to “In Rock” (1970) and “Fireball” (1971), was shocked when his brother brought the tape “Made in Japan”. He describes that moment as follows.

“I was just nine or 10 years old when my elder brother brought home ‘Made in Japan.’ I’d already heard Deep Purple’s ‘In Rock’ and ‘Fireball,’ both of which had affected me in Biblical proportions.” 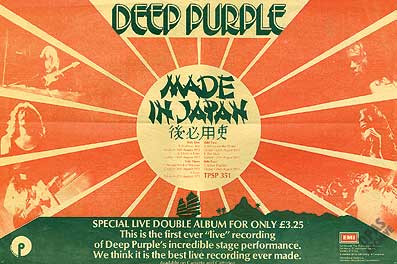 He added: “I went out and got Machine Head because I had loved Made In Japan so much, but as a naïve little kid from Sweden, I couldn’t understand why ‘Lazy’ and ‘Space Truckin” had suddenly become so short.”

Yngwie says he has never so impressed with another live album and “Made in Japan” felt very different. He even tells those moments as a religious experience.

“Back then, without the internet, Mp3 players and thousands of radio stations to choose from, hearing a new record for the first time was such a religious experience. I actually wore out three or four copies of the vinyl edition.”

One of the biggest events that affected Yngwie Malmsteen’s music career was this album. He says he practiced over and over with Ritchie Blackmore solos and recorded.

“Even now, when I put on ‘Made in Japan’ in my car, I still go, ‘Fuck! This is an incredible album.’ It really is amazing.”