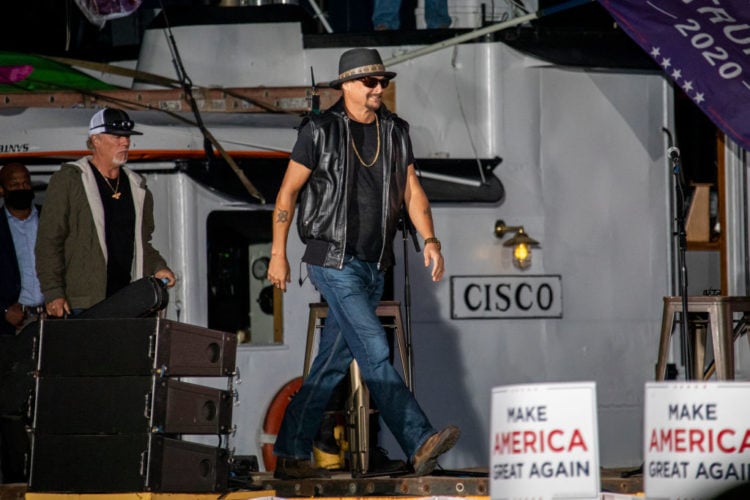 Kid Rock began his career as a rapper with the hip hop group The Beast Crew in the late 1980s. At the age of 17, he signed a solo deal with Jive Records, releasing his debut album, Grit Sandwiches for Breakfast, in 1990. Although his style was initially characterized by a hip-hop heavy sound, later albums would see him blend elements of hip hop, country, rock, and heavy metal. Although some critics have spent the past 30 years lambasting him at every opportunity they get, he’s sold enough records, won enough awards, and amassed enough fans not to care. Here’s how we rank all the Kid Rock studio albums from worst to best.

In November 1990, Kid Rock released his debut studio album, Grits Sandwiches For Breakfast. In contrast to the rock-orientated direction of his later albums, it’s a straight-up piece of hip hop. It’s not, however, a particularly compelling album. Critically, it was a disaster, with Rolling Stone even naming it to their list of “20 terrible albums by great artists.” Purists may disagree, but for most casual listeners, it’s best avoided.

For his third studio album, Kid Rock began to venture further away from the hip hop sound that had characterized his first two releases towards a more rock-oriented sound. The title track is a classic, giving center stage to the laid-back pimp desperado persona that Rock would perfect on his next album. The rest of the album is less fine-tuned. Although not a travesty, it’s a long way from being essential listening.

The best thing about Rock n Roll Jesus is All Summer Long. Released as the third single from the album, it became a massive international hit, peaking at No. 1 in eight countries, reaching No. 23 on the Billboard Hot 100, and picking up two Grammy Award nominations. The rest of the album is a mixed bag. There’s plenty of attitude and big guitars, but they get drowned in the splashy silliness and overpolished production. Commercially, it was a major hit, reaching No. 1 on the Billboard 200 (Kid Rock’s first and only album to chart the top) and selling over 5 million copies worldwide.

In November 2017, Kid Rock dropped his seventh studio album, Sweet Southern Sugar. Liberals aren’t going to like the lyrics too much, but the throwback country sound that characterizes much of the record is a welcome reprieve from his usual brand of old-fashioned hard rock. The album was a commercial success, reaching No. 8 on the US Billboard 200 and No. 4 on the Billboard Top Country Albums chart.

On his second studio album, The Polyfuze Method, Kid Rock began to take the first tentative steps away from hip hop toward rap-rock. As All Music noted in their review, the album represented a significant leap forward not only in the development of Kid Rock’s mixture of classic rock, hip-hop, and country influences, but his own trailer-park pimp-daddy persona. Unfortunately, he still had some way to go before he’d perfect it, and while tracks like Prodigal Son and The Cramper are promising, they’re not enough to save the album’s drift into mediocrity.

Kid Rock’s tenth studio album, First Kiss, was released in February 2015. It finds Kid Rock setting comfortable into his rollicking, relaxed brand of country. Some of the tracks are too laid back to be memorable, but while it’s unlikely to win any prizes for innovation, its easygoing style, crisp production, big choruses, and gravely vocals are unlikely to disappoint fans.

After his attempt to get respectable on 2010s Born Free failed to generate the kind of album sales he was expecting, Kid Rock went back to his tried and tested approach for its follow-up. Rebel Soul might come across as brainless to some people, but cheap thrills, tawdry humor, and bad taste is what people want from Kid Rock, and here, he delivers all three in spades. Released in November 2012, it reached No. 5 on the Billboard 200 and No. 10 in Canada.

Described by Entertainment Weekly (https://ew.com/article/2001/11/19/cocky/) as “boastful and defensive, confrontational and thin-skinned, loud, rude, and proud of it,” Cocky is almost exactly as you’d expect from the title, save for a few unlikely ballads like Lonely Road of Faith and Picture. It layers on the cheese a little too heavily at times, but overall, it’s hugely entertaining. Released in November 2001, it climbed to No. 3 on the US Billboard 200.

Born Free was Kid Rock’s attempt to clean up his image and get respectable music journalists on his side. It wasn’t a half-hearted attempt either – the album didn’t even have a parental advisory warning on the front. Although some fans didn’t much appreciate the change in image, the album itself is excellent, with a fresh take on heartland rock and enough memorable songs for it to easily rank among his best records.

Kid Rock’s self-titled fifth studio album was released to favorable reviews. It’s brash and silly and groaning under the weight of cliches, but there’s enough tongue-in-cheek humor, huge hooks, and corny charm to make it impossible to dislike. Released in November 2003, it made it to No 5 on the Billboard 200.

1. Devil Without a Cause

Kid Rock’s fourth studio album was where he perfected both his ‘redneck pimp’ persona and his genre-bending sound. The hip hop of his previous albums was pushed aside to make room for rap metal, hard rock, nu-metal, rap-rock, and even a little bit of country rap. The fusion of genres could have ended in a muddled, muddied mess, but somehow, it works, resulting in a funky, bone-crunching Southern-fried mashup that’s been hailed in many quarters as a rap-rock masterpiece. Released in August 1998, it was a major commercial success, peaking at No. 4 on the Billboard 200 and eventually certifying Diamond. It’s since sold over 15 million copies worldwide.