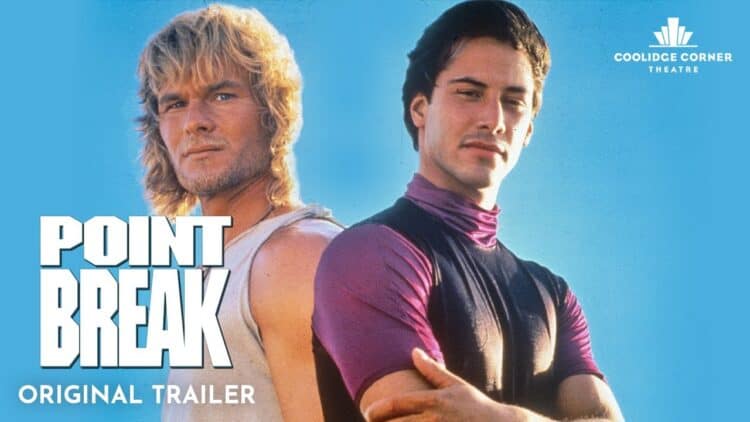 Point Break is more than a film about cops and robbers, it’s an intricate character study of tenacious, energetic and capable characters with a “live free or die” attitude. Couple that with the strong directing skills of Bigelow, great action scenes and a soundtrack packed with tracks that meticulously suit each scene, and you’ve got a memorable masterpiece. Take a trip with us down memory lane as we revisit the Point Break soundtrack, ranking our personal favorites in order from last place to first. The Point Break soundtrack is a feast for audiophiles everywhere. Each band was sourced from California, in keeping with the spirit of the film. As surfing and surfing lifestyle is a big part of the film, selected songs reflect the hard rhythm of waves pummeling the shore, as well as the soft tendrils of sound heard on a breezy, moonlit beach. The Point Break soundtrack is made to keep the film goer immersed in the world before them, as if they’re there themselves.

14. So Long Cowboy by Westworld

“So Long Cowboy” accompanies the scene where Johnny Utah, played by actor Keanu Reeves, is surfboard shopping. Written and performed by the short-lived, hard/glam metal California band Westworld, the song reinforces the spirit of youth and adventure.

Released as a “B” side by the band Love in 1966, “7 and 7 Is” appears in one of the surfing scenes. Here, Utah is practicing his form and accidentally collides with a rival surfer named Warchild. The song hit number 33 on Billboards Pop Singles chart, and has a definite 1960’s surfing vibe to it, so suits the scene very well.

In the scene where Johnny and Angelo are visiting beaches to snip hair from beach goers in an effort to help identify their suspects, we can hear School of Fish’s song “Rose Colored Glasses” playing in the background. Composed by band member Josh Clayton-Felt and Michael Ward, the song is found on their debut album, “School of Fish”.

“Criminal” concerns the consequences of going down the narrow path that leads to nowhere: No pardon and no pity. The tune was written by ex-sexpistol member Johnny Lydon, John McGeoch an Allan Dias, produced by James Barton for Virgin Records.

Composed by Arthur Lee and produced by John Hanlon, the track performed by Liquid Jesus is explosive with hints of the blues, electric jazz and of course, rock. Known for their style of fusing various genres together in to one solid track, “7 and 7 Is” told a story of a boy growing into a man with a powerful smack to the senses.

9. My City by Shark Island

California glam metal band Shark Island composed and performed this piece for Point Break. However, did you know that they also contributed to Keanu Reeves other film, Bill and Teds Excellent Adventure? That’s true. Shark Island performed two songs for that soundtrack: “Dangerous” and “Father Time”.

8. I Want You by Concrete Blonde

“I Want You” was released in 1990.Written by band member Johnette Napolitano, the song can be found on the “B” side of their single, “Joey”. The song is played as Johnny Utah watches Tyler get a fresh change of clothes near her car.

7. Down to the Wire by Little Caesar

Little Caesar is an American hard rock band that hails from California. Formed in 1987 Little Caesar is still active today. “Down to the Wire” got Little Caesar noticed, which got them signed to their first label, DGC Records in 1989. Played during the pizza delivery scene the song continues to reinforce the atmosphere of high energy, danger and noncompromise.

6. I Will Not Fail by Wire Train

Learning to surf is no easy feat, as Utah is finding out in this scene. As Tyler teaches Johnny, the track, “I Will Not Fail” by California band Wire Train can be heard creating a nice backdrop for the scene, helping to showcase Utah’s determination to succeed.

5. Nobody Rides for Free by Ratt

“Nobody Rides for Free” by composer Steve Caton, performed by Ratt was released in 1991. The California band made some minor alterations to the song after receiving it. The official video used images of the band mixed in with scenes from the movie, Point Break and plays during the ending credits.

4. Smoke on the Water

Loudhouse’s cover of Deep Purple’s masterpiece, “Smoke on the Water” was used as background music for the night-time football match. Deep Purple fans might not like their interpretation of the song, but it’s solid, full of pump and does for the scene what it’s supposed to do.

This track accomanies the night-time beach scene. Here, Bodhi explains to Utah the power of the 50-year storm, and their intention of surfing it, live or die. Performed by California glam/metal band, L.A. Guns, “Over the Edge” helps to create an aura of “live free or die trying” for the scene.

The song “If 6 was 9” was performed during the party scene at Bodhi’s place. Performed by the Jimi Hendrix Experience and composed by Hendrix himself, the song was originally released in 1967 and appeared on both the Easy Rider and Point Break soundtracks. Perfectly placed, it’s a song about individuality, which suited Bohdi’s philosophy perfectly.

1. Hundreds of Tears by Sheryl Crowe

Lyrics and music by Sheryl Crowe and Bob Marlette, this song finds itself in the cafe scene where Utah is relating his fictional life story to Tyler. Here, Utah is begging Tyler to show him the ins and outs of surfing. If you listen carefully, the song gives subtle hints as to where there the film is going.