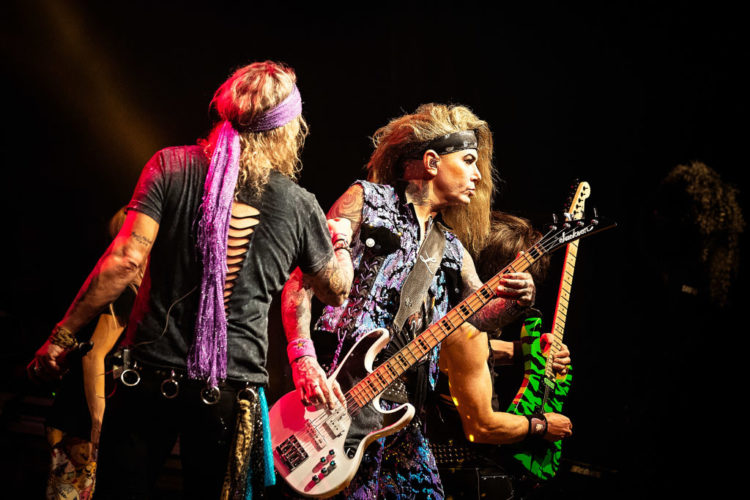 Steel Panther was formed in 2000 in Los Angeles California. The group is a glam metal parody band fronted by LA Guns vocalist Ralph Saenz who performs as Michael Starr. The other members of the group are bassist Travis “Lexxi Foxxx” Haley, drummer Darren “Stix Zadnia” Leader, and Russ “Satchel” Parrish. In their early days, the group was known as Metal Shop, changing to Metal Skool before using the group name Steel Panther. Members of the group started their careers playing in a Van Halen tribute band before starting a group whose main purpose is to lambaste hair metal of the 80s. In 2008, the group signed onto Universal Republic and released their first album Feel the Steel in October 2009. It just the Billboard charts at number 98. Their second album featured guest appearances by Chad Kroger Nickelback’s frontman and Dane Cook. Steel Panther achieved some mainstream success, even playing a metal band in a Discover card commercial as Danger Kitty and guest starring on the Drew Carey Show as themselves. One of their songs was used as the theme song for MTV’s Fantasy Factory. According to their website, Steel Panthers released a Van Halen tribute album on March 2011, including a cover of the song Beautiful Girls. This was a return to their early days as a cover band. They added that the music of Van Halen is what shaped who the band is today. These are the 10 best Steel Panther songs of all time.

This song is unexpected, but The Backstreet Boy’s song doesn’t seem like a tune that would lend itself to a remix that Whitesnake might perform. There are a lot of guitar runs in this song that adds to the song and makes it something other than a boy band hit. The drum punctuation makes it a throwback to the glory days of hair metal and not a pop fluff piece.

9. The Burden of Being Wonderful

There is a touch of irony in this song since Steel Panther prides itself on being a metal band that missed its heyday. The lyrics are about an aging rocker who thinks he still has mojo. Even though there are rock stars like Steven Tyler and Keith Richards who stay cool for decades, the character in this song is more like the guy in Pretty Fly For A White Guy by Offspring.

The bright intro on this song adds to the overtop Coyote Ugly situation many people endure when they pick someone up during last call. Desperation makes anyone look good and a little intoxication makes a person look like Ms. or Mr. right even if they wouldn’t get a second glance sober. Much like Let’s Get Drunk by Jimmy Buffet or I Don’t Even Know Your Name by Alan Jackson, this song is a comedic romp through the stupid everyone makes.

The opening bars in this song are similar to Rock You Like A Hurricane but the lyrics. The lyrics in this song area very uncomfortable laugh. There isn’t a single woman in the world who would put up with the character the group sings about. Throughout Steel Panther’s catalog, they pride themselves on being comical misogynists. This song is another example of their crazy style that is fun 3-minute cringe.

6. If You Really Really Love Me

If you want to hear a sweet song about Mr. very very wrong, this is it. Even though this is the guy who wouldn’t make it through the first cheesy pick-up line it’s funny to think that he is someone’s mistake in the song. Many women already think men are Neanderthals and this song’s lyrics take those stereotypes to epic heights.

If The Bloodhound Gang went metal, the song would undoubtedly sound like this. The outrageous lyrics are a fun romp through the craziest fantasies a sane person would never consider. The soaring rock and guitar lightly mask the lyrics. Nonetheless, it’s another song from a group that constantly pushes the limits of songwriting.

The rock and roll lifestyle is something many stars take to extremes. Welcome to the lyrics in this song where Steel Panther is living it up because the world is ending the next day. Party, like it’s 1999, sounds like Mr. Roger’s neighborhood next to this song. The party they’re throwing sounds like a post-apocalyptic rave.

Forget flowers and romance, Steel Panther has other thoughts on what a girl wants. The group thinks that even though their style of music went out in the late 80s they can still pick up anyone they want because at least in their mind they are rock gods. The lyrics of the song are misguided machismo. If this was another genre of music, it might come across as crass but with the help of throwback 80s instrumentation, they make it work well.

Even though this song is an extreme example of people who put across the face that they want you to see only to turn into someone who’ll break your heart. The group knows how to deliver the cigarette smoke voices over electric 80s guitar but the twist of their lyrics is what keeps the band popular. One of the best parts of the group is you almost wonder if one of their songs was missed during the 80s.

The instrumentation of this song sounds like Def Leppard but the lyrics are a complete mockery of all 80s parody ballads. Steel Panther takes every 80s stereotype and creates lyrics that show off the worst sides of the genre. Even though their music is over the top and with sometimes questionable lyrics, it’s hilarious to hear songs that make you question some of your musical decisions. This song is classic Steel Panther, who didn’t miss their fifteen minutes of fame in the 80s because they’re a great way to laugh at the outrageousness of the decade.