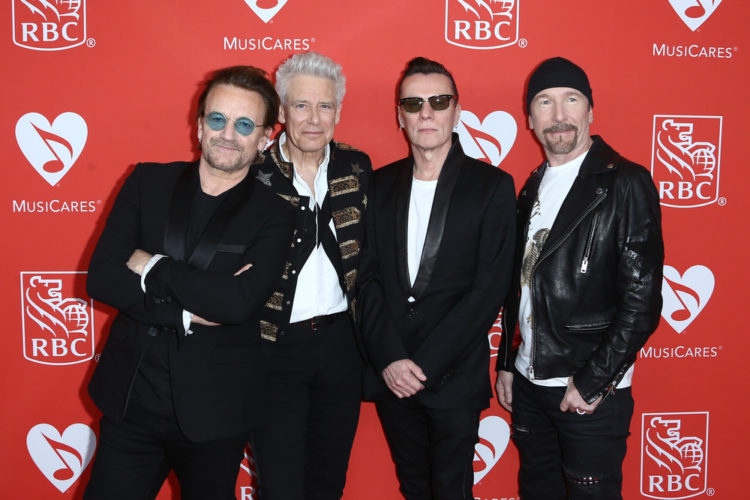 U2 is an Irish rock band that was formed in Dublin in 1976. The lead vocalist and rhythm guitarist of the group is Bono. Other band members include bass guitarist Adam Clayton, drummer and percussionist Larry Mullen Jr., and the Edge on lead guitar, keyboards, and backing vocals. Originally, U2’s music was rooted in post-punk. However, their music has evolved over the years, and some of the genres covered include rock, alternative rock, and pop-rock. Most of the band’s songs cover personal and socio-political themes. The band released their debut album, ‘Boy,’ in 1980. Since then, U2 has gone on to release 14 studio albums, 15 video albums, 73 music videos, 11 subscriber-exclusive albums, nine Eps, three compilation albums, one live album, and 83 singles. Here are the 20 best U2 songs of all time.

In Ireland, the band’s home country, ‘Staring at the Sun’ only peaked at number four. However, it topped the Canadian chart and the US Alternative Songs chart. It was the second single released from the album ‘Pop.’ To promote the single, the band distributed telescopes with the single’s logo. U2 hoped that this single would become as popular as ‘One,’ but it never achieved the same level of success.

Throughout their career, U2 has collaborated with a diverse range of other artists on tracks. One of their best and most successful examples is ‘All I Want Is You,’ which features blues singer B.B. King. The song featured on the album ‘Rattle and Hum’ and was also played on the closing credits of the film that is also called ‘Rattle and Hum.’ Brian McFadden released a cover of this song that featured Ronan Keating.

‘When Love Comes to Town’ topped the charts in Ireland and was a top ten hit in New Zealand and the UK. It also reached number two on the US Mainstream Rock Tracks chart. The song featured on the 1988 album ‘Rattle and Hum.’ It featured blues guitarist B.B. King, and he regularly played this song during his concerts, tours, and other live performances. Little Richard is featured rapping and preaching on the extended version of the song, which was recorded live from the Kingdom Mix.

U2’s first number one hit in their home country, Ireland, was ‘The Unforgettable Fire.’ It was also a top ten hit in the UK, the Netherlands, and New Zealand. This song was the title track on the 1984 album of the same name. The band members collaborated on the composition of the song, and Bono wrote the lyrics. It has an atmospheric composition, and the string arrangement was written by jazz musician Noel Kelehan.

‘Desire’ was a number one hit in Ireland, Australia, Canada, New Zealand, and the UK. However, it peaked at only number three on the Billboard Hot 100. The track was the third released as a single from the album ‘Rattle and Hum.’ It won the Grammy Award for Best Rock Performance by a Duo or Group with Vocal. The influence for this single was the Stooges song ‘1969.’ U2 first performed this song live on the opening night of their Lovetown Tour, and their performance merged into a cover of Bob Dylan’s ‘All Along the Watchtower.’

‘Stay (Faraway So Close!)’ was the third track released as a single from the album ‘Zooropa.’ It reached number one in Ireland and was a top ten hit in the UK, New Zealand, the Netherlands, and Australia. The song was inspired by Frank Sinatra, and his surname was used as the original working title. It was nominated for a Golden Globe for Best Original Song. Although it is not in the top ten most commercially successful U2 songs, it is one of the band’s personal favorites.

‘Discotheque’ was the opening track on the 1997 album ‘Pop.’ The single veered from U2’s usual rock style, as they were influenced by electronic dance music, a style which they used throughout the 1990s. The title and theme of the song were represented in the accompanying music video as the band was dressed as members of the Village People, and they were set inside a mirrorball. Although the song peaked at number one in New Zealand, Italy, Ireland, Norway, Finland, and the UK, it received mixed reviews from critics.

‘The Sweetest Thing’ was a top ten hit in Australia, New Zealand, the UK, Sweden, and Spain. However, it was most successful in Iceland, Canada, and Ireland, where it reached number one. This song was originally released as the B-Side to ‘Where the Streets Have No Name.’ It then featured on the compilation album ‘The Best of 1980-1990.’

‘Stuck in a Moment You Can’t Get Out Of’ was the second single released from the 2000 album ‘All That You Can’t Leave Behind.’ It was the band’s second number-one hit in Ireland in the 2000s, and it also reached number one in Canada. At the 44th Annual Grammy Awards, the song won the award for Best Pop Performance by a Duo or Group with Vocal.

The third track released from ‘All That You Can’t Leave Behind’ was ‘Elevation.’ Not only did this song top the Irish singles chart, but it also topped the charts in the Netherlands and Canada. Furthermore, this Grammy Award-winning song was a top ten hit in countries including Spain, the UK, Finland, Italy, Denmark, Norway, and Australia. The song featured on the soundtrack for the 2001 film ‘Lara Croft: Tomb Raider.’

‘How to Dismantle an Atomic Bomb’ was the title of the album U2 released in 2004 and the first single released from the album was ‘Vertigo.’ It was a number one hit in Ireland, Denmark, Italy, Greece, Spain, and the UK, and reached the top ten in the charts in Australia, Belgium, Canada, the Netherlands, Sweden, New Zealand, and Switzerland. An interesting fact about this song is that the unusual first line was the result of drinking too much alcohol. “Unos, dos, tres, catorce” translates as “some, two, three, fourteen.’

‘Hold Me, Thrill Me, Kiss Me, Kill Me’ featured on the soundtrack of the 1995 film ‘Batman Forever‘. The film’s director, Joel Schumacher, invited the group to write songs for the movie, and he also tried to create a cameo role for Bono. It was a number one single in Ireland, Australia, and New Zealand and also topped the US Alternative Rock chart.

Rolling Stone lists ‘One’ as one of the best U2 songs. The band originally released this song in 1992, and it is featured on the album ‘Achtung Baby.’ It topped the US Alternative rock charts and the singles charts in Ireland and Canada. The band re-released the song in 2005 as a duet with Mary J. Blige, and if featured on her album ‘The Breakthrough.’

‘The Saints Are Coming’ is a fantastic example of the outstanding music produced by U2 when collaborating with other artists. This song featured the American rock band Green Day, and it featured on U2’s album ‘U218 Singles.’ The song was written by Richard Jacobson and Stuart Adamson, and it was originally recorded by the Scottish punk rock band ‘Skids’ in 1978.

Although ‘The Fly’ only reached number 61 on the Billboard Hot 100, it topped the US Alternative Rock chart. Elsewhere, it was a number one hit in Ireland, Australia, New Zealand, and the UK, and a top ten hit in France, the Netherlands, Sweden, and Switzerland. The track featured on the album ‘Achtung Baby.’ Bono explained that the lyrics are about someone who enjoys being in hell making a phone call to tell someone what he has learned.

Ultimate Classic Rock considers ‘Mysterious Ways’ one of the best U2 songs of all time. It was the second single released from the album ‘Achtung Baby,’ and it was a number one hit on the Irish, Canadian, and US Alternative Rock charts. The single was built from a song called ‘Sick Puppy,’ but the band only liked the bassist element of the tune. They struggled to build on the original, but after many changes, they released the song with the title ‘Mysterious Ways.’

The second single released from the album ‘The Joshua Tree’ was ‘I Still Haven’t Found What I’ve Been Looking For.’ It topped the charts in both Ireland and the United States. The song was inspired by U2’s interest in American music, and it originated from a demo the band recorded that featured a unique rhythm pattern played by drummer Larry Mullen Jr. It was nominated for Grammy Awards in the categories of Song of the Year and Record of the Year.

‘Where the Streets Have No Name’ tops a list in The Guardian as one of the best U2 songs. It featured on the album ‘The Joshua Tree’ and was a number one hit in Ireland and New Zealand. The accompanying music video was filmed on a rooftop in Los Angeles, and it won a Grammy Award for Best Performance Music Video. On the B-side to the single, there were three tracks, including ‘Race Against Time,’ ‘Silver and Gold,’ and ‘Sweetest Thing.’

‘With or Without You’ was the first of U2’s singles to top the Billboard Hot 100, and it was also a number one hit in Ireland and Canada. Furthermore, it was a top ten hit in Australia, France, the Netherlands, New Zealand, Switzerland, and the UK. This song was the first track released as a single from the album ‘The Joshua Tree.’ ‘With or Without You’ is the second-most covered U2 song of all time. The single was produced by Brian Eno and Daniel Lanois.

In terms of commercial success, the best U2 song is ‘Beautiful Day. The Platinum-certified single topped the charts in Ireland, the UK, Australia, the Netherlands, and Canada. It was also a top ten hit in multiple countries, including Switzerland, Sweden, and the Netherlands. The track featured on the band’s tenth studio album, ‘All That You Can’t Leave Behind.’ The style of this song reverted back to the style the band had used in the 1980s, as they veered more towards pop during the 1990s. Bono said that the song is about seeing the joy in everything no matter what you have lost.