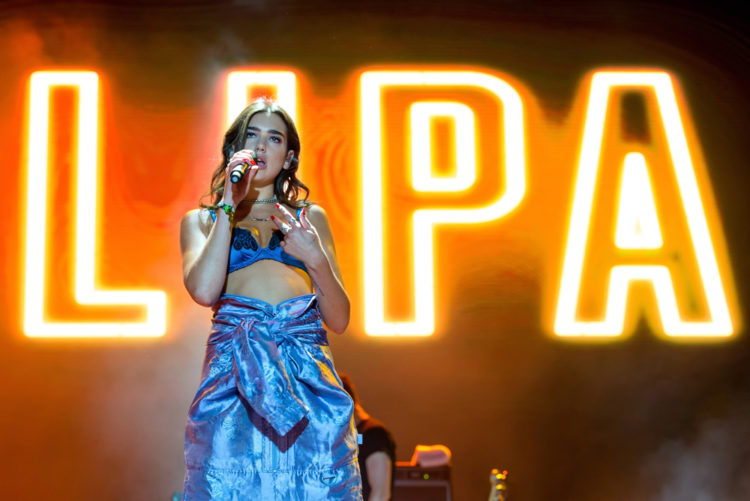 Born in London, England, the English singer and songwriter known as Dua Lipa was born on August 22, 1995, as the eldest child of Muslim-Albanian parents who came to the UK from the Federal Republic of Yugoslavia. Crediting her love of music from her father, who used to perform as the lead singer for his Kosovan rock band, Oda, Dua Lipa started singing at the age of five years old. While attending school in West Hampstead, London, Dua Lipa took cello lessons and attempted to join their school choir. She was rejected by her teacher, being told she could not sing. At nine years old, Lipa took singing lessons at the Sylvia Young Theatre School before moving with her family back to Yugoslavia’s Pristina after Kosovo declared independence in 2008.

While there, Lipa learned more about Albanian culture and its language. She also began to consider a musical career as a rapper more seriously. When she moved back to London at the age of fifteen and achieved her A-levels while at the Parliament High School. She later returned as a part-time student to the Sylvia Young Theatre School and later posted her own songs on SoundCloud and videos on YouTube. Upon signing with the modeling agency known as Topshop, Lipa earned herself a role as a singer with the British Independent Television network (ITV) for a 2013 ad featuring The X Factor music competition. The song she performed was Lost In Music, which was originally performed in 1979 by Sister Sledge. Since then, Dua Lipa acquired herself a producer and manager to put her musical career forward. So far, Dua Lipa has released two studio albums, both of which were reissued, a remix album, and 4 EPs.

From the year 2021, Dua Lipa’s song (We’re Good) comes from her 2021 album (Future Nostalgia: The Moonlight Edition). Despite this single still being quite new, it has already been certified Gold by Australia’s ARIA, USA’s RIAA, and New Zealand’s RMNZ, as well as Silver with the UK’s British Phonographic Industry (BPI). While this song has not broken into the top ten on any of the singles charts, We’re Good still did good enough. With Ireland’s Music Chart, it peaks at #17. Canada’s Hot 100 sees We’re Good reach #21. Australia’s ARIA Charts and the Official New Zealand Music chart both place We’re Good at #24. The UK Singles Chart places the song at #25, as does the Dutch Single Top 100. With Sweden’s Sverigettopplistan and the US Billboard Hot 100, it reaches #31. Belgium’s Ultratop scores the song at #32, and Germany’s GfK Entertainment Chart rates it at #52.

8. Scared to Be Lonely (with Martin Garrix)

Although it wasn’t officially linked to an album at the time, the duet song (Scared to Be Lonely) was released in 2017 and fast became a cult favorite. On the charts, it came in as high as #3 with the Dutch Single Top 100 chart and with Sweden’s Sverigetopplistan chart. In New Zealand, it ranked at #8, in Germany at #9, in Belgium at #10, in Ireland at #12, and in the UK and New Zealand at #14. With Canada’s Hot 100, Scared to Be Lonely peaked at #32, and with the US Billboard Hot 100 the song registered at #76. This song earned single Platinum certification with BEA, BVMI, and RMNZ and double platinum with BPI, MC, and RIAA. With ARIA and NVPI, it earned triple platinum. GLF certified this single as Platinum four times over.

From Dua Lipa’s debut album (Dua Lipa), which was released in 2015, comes her first official hit single (Be The One). It reached the very top of Belgium’s music chart at #1. Among other charts, it reached #9 in the UK, #6 in Australia, #11 with the Dutch and Germans, #20 in New Zealand, #25 in Ireland, and #100 in Sweden. Although Be The One was not officially charted in Canada nor on US BIllboard’s Hot 100, it still earned Gold certification from each nation’s music industry organizations. (Canada’s MC and USA’s RIAA). It also achieved Gold with GLF and RMNZ. This song also earned 2x Platinum with BPI, ARIA, and NVPI, as well as single Platinum with BEA and Germany’s BVMI.

Charting as high as #2 in Ireland and #3 in the UK and Belgium is Dua Lipa’s single (Physical) from her 2019 album (Future Nostalgia). In Australia, it placed 9th, and in Germany, it ranked 14th. With the Dutch, the song scored at #15 and in New Zealand at #16. Elsewhere, #42 in Sweden, #54 in Canada, and #60 with the US Billboard Hot 100. Physical has achieved Platinum certification with BPI, ARIA (2x), BEA, MC, and RIAA. With BVMI and RMNZ, the song earned Gold.

Dua Lipa’s 2019 album (Future Nostalgia) releases it’s single (Break My Heart) and quickly it earns Platinum certification with BPI, ARIA (2x), BEA, MC, and RIAA. It becomes certified Gold with RMNZ. On the charts, Break My Heart peaks at #3 in Ireland, #6 in the UK, #7 in Australia, #12 among the Dutch and in New Zealand, as well as #13 in Canada and the US Billboard Hot 100. Break My Heart places 14th in Belgium, 21st in Sweden, and 26th in Germany.

Coming from Dua Lupa’s 2017 self-titled album is the song (IDGAF), which reaches the top spot on Ireland’s music chart in 2018. It peaks at #3 with the UK and in Australia, at #4 in Belgium, #5 in New Zealand, #8 with the Dutch, #12 in Germany, #15 in Sweden, #29 in Canada, and #39 on the US Billboard Hot 100. It also earned certifications as 2x Platinum with BPI, 4x Platinum with ARIA, Gold with BEA and BVMI, Platinum with GLF, 5x Platinum with MC, 2x Platinum with RIAA, and Platinum with RMNZ.

In 2019, Lipa’s (Don’t Start Now) from her 2019 album (Future Nostalgia) makes its mark on the music charts, as well as the hearts of music fans and critics everywhere. In Ireland, it peaked at #1 while in Australia, Belgium, the UK and the US Billboard Hot 100 it peaks at #2. In Canada, it reaches #3 while with the Dutch at #5. The song also reaches #10 in Germany and #13 in Sweden. Don’t Start Now also achieves BPI’s 3x Platinum, ARIA’s 7x Platinum, BEA’s 2x Platinum, BVMI’s Platinum, Mc’s 7x Platinum, RIAA’s 4x Platinum, and RMNZ 3x Platinum.

1. One Kiss (with Calvin Harris)

In 2018, the non-album single (One Kiss) is performed with Taylor Swift’s ex-boyfriend Calvin Harris and instantly becomes a cult classic. It peaked at #1 on five different music charts, namely with the UK, Belgium, Germany, the Dutch, and Ireland. In Australia, it ranked at #3 while in Sweden at #4, and in Canada and New Zealand at #6. And, with the US Billboard Hot 100, at #26.