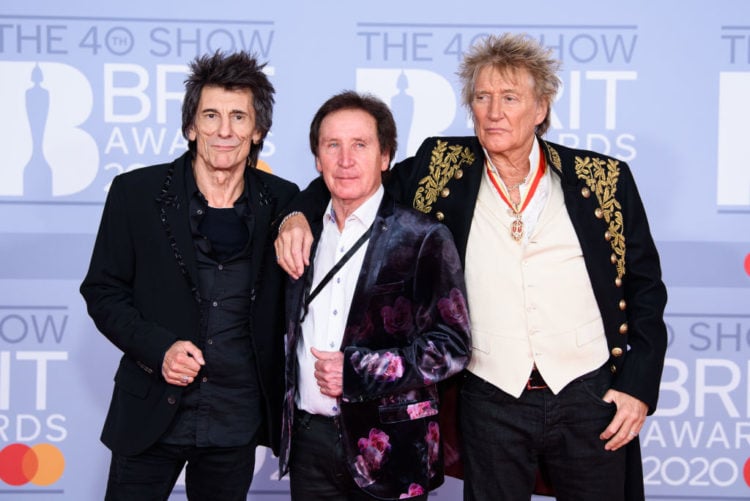 As a member of The Small Faces, Faces, and The Who, drummer Kenney Jones played a part in three of the biggest and most loved UK bands of the ’60s and ’70s. His time with The Who may have divided opinion (particularly within the band itself), but that had less to do with his consummate drumming than it did the daunting and impossible task of replacing Keith Moon. Today, as the last surviving member of the original Small Faces’ lineup, he’s still performing, still recording, and, according to reports, currently hard at work with Ronnie Wood and Rod Stewart on a new Faces album. To find out more, here are 10 things you didn’t know about Kenney Jones.

In 1965, Steve Marriott, Ronnie Lane, Kenney Jones and Jimmy Winston joined together to form The Small Faces. Thanks to hits like “Itchycoo Park”, “Lazy Sunday”, “All or Nothing”, and “Tin Soldier”, they quickly became one of the most popular psych-pop bands of the 1960s. When Marriott got sick of the teeny boppers at gigs and left to form the more adult orientated Humble Pie, the remaining band members recruited Rod Stewart and guitarist Ronnie Wood to hop on board – although the pair’s statue meant the band had to drop the “small” from their name and rebrand as the Faces. Jones stayed with the band until they disbanded in 1975. Since Jimmy Winston passed away in September 2020, he’s the only remaining member of the original Small Faces lineup still around. In 2012, he was inducted into the Rock and Roll Hall of Fame in recognition of his work with the Faces/ Small Faces.

2. He had a fractious relationship with The Who

Keith Moon was more than just a drummer. He was a larger-than-life character whose nutty performances and flamboyant style made him irreplaceable to The Who. But following his death, someone had to step into his shoes, and that honor fell to Jones. It didn’t work. Jones was a straightforward, solid drummer. Moon was a whirling dervish. Comparisons were made and Jones was, almost inevitably, found wanting, especially by Roger Daltry, who later called his drumming style “simplistic and stifling.” Jones was eventually replaced but has since let bygones be bygones by performing alongside his old bandmates at several reunion gigs.

Not all drummers get to be multi-millionaires, but then again, not all drummers get to play with three of the most seminal bands of the 20th century. Now aged 72, Jones has amassed a very pretty fortune. According to Celebrity Net Worth, the drummer is worth the mammoth amount of $20 million.

4. His uncle inspired him to start drumming

When Jones was a kid, his uncle Dave used to lead a brass band in Catholic processions around London’s East End, where Jones was raised. Jones used to follow them around pretending to be a side drummer. When he got home, he’d use a biscuit tin and two bits of firewood as a makeshift drum kit. He finally got his first proper drum kit at the age of 13, but replaced it 8 months later. Unbeknown to him, his friend and future bandmate Ronnie Lane gave the first kit to his best friend. Years later, the man’s son contacted Jones and asked if he wanted it back. He did, and it’s now one of his most prized possessions.

Jones has always been a big fan of polo, and even owns the Hurtwood Park Polo Club in Ewhurst, Surrey. According to the Daily Mail, he used to play on a polo team with Police drummer Stewart Copeland and guitarist Mike Rutherford, who once gifted him with the polo stick Ignacio Heguy used to score the Gold Cup-winning goal at Cowdray Park in 1996.

6. He formed The Law after leaving The Who

After leaving The Who, Jones teamed up with former Bad Company lead singer Paul Rodgers to form The Law. It wasn’t a complete success, and their one and only album peaked at a disappointing No.126 on Billboard’s Pop Albums chart. After the band broke up, he took some time out before eventually returning in 2005 with the debut album from his new band, The Jones Gang.

Jones has made no secret of the fact he’s a dyed-in-the-wool Tory. He even released a song in the 1990s criticizing the tax policies of Labor’s then Chancellor of Exchequer Gordon Brown. He’s also a supporter of the Countryside Alliance and has performed at numerous fundraising gigs on their behalf.

You wouldn’t have thought the son of Ringo Starr would need to look outside the family for drumming advice, but according to Jones, it was him that taught Zak Starkey how to play. “When I joined the Who, I got Keith’s white drum kit out of storage and gave it to Zak. He had told me as a little boy that Keith had always promised him that drum kit. So I put it in a van and surprised him after school with it one day. I did my bit for him,” he said during an interview with the Vulture. Coincidentally, Starkey would later go on to step into his shoes as The Who’s touring drummer.

In September 2013, Jones was diagnosed with prostate cancer following a routine health check with his local GP. He had symptoms for 17 years, but it wasn’t until a nurse recommended that he took a blood test that it got diagnosed. He’s since staged a complete recovery and now takes part in campaigns to raise awareness for the disease and to encourage men to get checked out.

10. He’s performed alongside The Rolling Stones

In between bands, Jones has kept his hand in by performing as a guest drummer for a huge variety of arts. According to Wikipedia, he’s made appearances on albums by Joan Armatrading, Keith Moon, Marsha Hunt, Rod Stewart, Roger Daltrey, Andy Fairweather-Low, Mike Batt, The Rolling Stones, Ronnie Wood, Pete Townshend, Jerry Lee Lewis, David Essex, Chuck Berry, John Lodge and Wings. He also once guested alongside Status Quo during a performance of the 1986 hit single Red Sky on Top of the Pops.