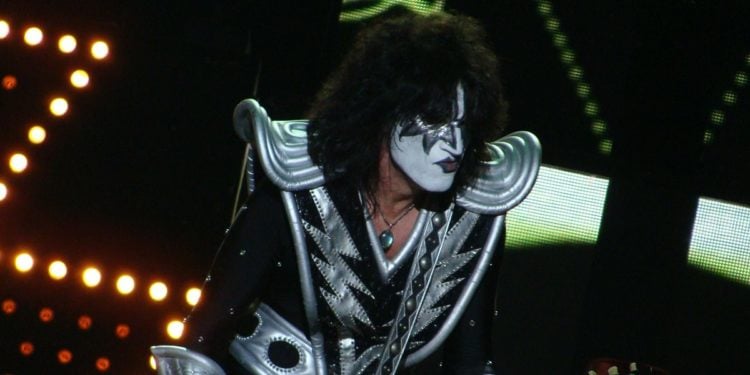 KISS guitarist Tommy Thayer recently spoke about fan art, his iconic makeup, favorite KISS songs to play, and their farewell tour. While mentioning that the makeup is from his childhood, Tommy Thayer  recently explained how long it took to put it on. Talking about the current situation of their farewell tour, the KISS guitarist also said that they were on hold, just like everybody else. He named two songs from the KISS catalog that he loved playing, also expressing his thoughts about one of them. Here’s what Tommy Thayer said during his appearance on the 43rd episode of Hangin’ & Bangin’, as transcribed by Ultimate-Guitar.

Tommy Thayer spoke about the fan art that KISS receives

When the interviewer asked about a specific piece of fan art they received, Tommy Thayer replied by saying that there were too many. “Oh man, there’s so much stuff. I guess KISS is the most licensed group of artist, but the imagery as you know, it’s so ripe for doing all these kinds of things. And that’s *shows a picture of a new guitar* one of my new signature guitars, which is cool.”

KISS guitarist on their farewell tour

Tommy Thayer said his band was just on hold like everybody else, and they are planning to continue The End of the Road tour. “Yeah, of course. We’ve just been on hold like everybody else has been, and I figure… I mean, it’s kind of a month-to-month thing depending on how the Covid, the vaccine roll-out goes, and everything. So we’re just kind of waiting to see, there are dates scheduled, I’m hoping that it all falls into place.”

Tommy Thayer on his favorite songs to play

Asked about his favorite song from the KISS catalog to play, the guitarist mentioned two of them. He also exchanged ideas about one of the songs with the interviewer. “Oh man, probably ‘Black Diamond’ or ‘100,000 Years.’ Ace did some really great stuff back then, and there are so many great signature guitar solos and stuff, but those two things.”

When the interviewer said “‘Black Diamond’ was like their ‘Stairway to Heaven’ kind of vibe,” Thayer replied: “Yeah, kind of, I mean, the big set finale at the end of the set, and you know, but great stuff, great guitar solos, and great guitar parts.”

Tommy Thayer on the KISS makeup

When the interviewer asked how long it took to put on his iconic makeup, Thayer had the following to say. It seems this question is one he gets frequently.

“That’s the No. 1 asked question of all time. Actually, when I was 12-13 years old, for Halloween, I put the KISS makeup on, so I’ve been well-versed for a long time. But usually it takes me about an hour to put it on, we give it a couple of hours. When we get ready every night, that’s the cool thing, that the whole transition of putting the makeup on and getting ready, we all do it together in a room. We listen to music, and that’s a cool thing. I can’t imagine not doing that every night and transitioning into KISS.”

You can watch the whole interview below.