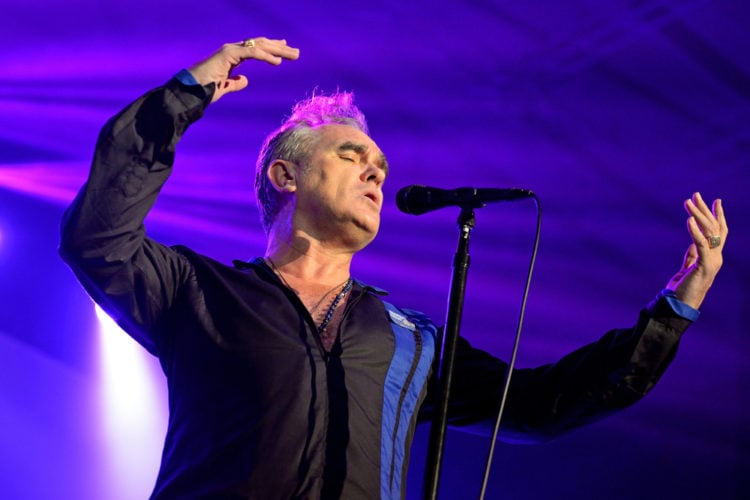 When the Smiths broke up, no one knew how Morrissey would fare without Johnny Marr by his side. As it turned out, he’d do just fine. His political opinions may have left a cloud over his most recent work, but it’s done nothing to taint his legacy as one of the seminal figures in indie rock. Here’s how we rank all 13 Morrissey albums from worst to best.

Getting things off to a bad start is the misguided Maladjusted. For his sixth solo album, Morrissey decided to combine the torch songs of the superb Vauxhall and I with the indie rock sounds of The Smiths, Why, only he can answer. As to the result, no one who’s heard it will tell you that it’s anything but a disappointment. Beret of his usual charm and charisma, the album could only summon enough muster to limp to number 61 on the Billboard 200.

In fairness, there’s very little to choose between Maladjusted and Kill Uncle. One had to precede the other but really, they’re both as bad as each other. Described by All Music as “Morrissey’s least distinguished record” with “neither melody nor much wit,” it’s an album that’s best avoided if you can.

Morrissey’s latest but one album dropped in May 2019 to a lukewarm reception. The main problem is the song choice. The songs themselves – which consist of largely forgotten protest songs from the ’60 and high camp kitsch from the 1970s – are actually lovely taken in isolation. But hearing this kind of material sung by someone with Morrissey’s divisive opinions is disconcerting in the extreme. A case of good songs, wrong choice of singer.

Morrissey has always been curmudgeonly, but somewhere along the line, his contrarian nature curdled into something much harder to swallow. Fans began to drift away in their droves – not because of his music, but because of his habit of showing up in public wearing far right pins and expressing views that would make Ted Nugent seem left of center. His response was Low in High School, a cutting swipe at mainstream media and ‘fake news’ that deliberately and gleefully echoes the sentiments and words of certain right-wing politicians. Musically, he’s all over the place, jumping from jazz one moment to disco the next. It’s all a little confusing, resulting in an album that’s best reserved for the devoted.

Following hot on the heels of 2019’s California Sun came Morrissey’s 13th studio outing, I Am Not a Dog on a Chain. While better than its predecessor, it falls far short of his best work. There are good moments to be found, but they’re almost lost in the many more moments of repetition and misguided experiments. Released in March 2020, it failed to chart in the US but reached a very respectable number 3 in the UK.

8. World Peace is None of Your Business

If you’re already feeling blue, you might want to give World Peace is None of Your Business a miss. With songs about bullfighters dying and a student’s suicide, it’s not exactly the cheeriest record around. It’s by no means a bad album, though, with enough to chew on to keep both hardcore fans and more casual listeners happy. Released in July 2014, it climbed to number 14 on the US Billboard 200 and number 2 in the UK.

2009’s Years of Refusal is the first Morrissey album since Your Arsenal not to feature lead guitarist (and one-time songwriting partner) Alain Whyte, who was forced to sit out the album due to illness. While missed, his permanent replacement, Jesse Tobias, does a fine job of stepping into his shoes. Morrissey has since described the album as his “strongest work to date.” It’s not (there’s a little too much bitterness for that), but it’s still a very accomplished effort.

Described by the Los Angeles Times as “the most musically dynamic album from the Messiah of Moans since he revitalized British rock with The Smiths in the mid-’80s,” Southpaw Grammar received a warm reception from most quarters of the music press on its release in August 2005. It’s a little grumpy and just a tiny bit craven, but the harsh beauty of The Teachers Are Afraid of the Pupils, The Operation, and Southpaw redeem it.

5. Ringleader of the Tormentor

Having ended his seven-year itch with the irrepressible You Are the Quarry in 2004, Morrissey continued his comeback with 2006’s Ringleader of the Tormentors. It’s a lovely album, if not necessarily a distinctive one, passing by in a dreamy haze of slick dirges and heartfelt confessionals. You might not remember too many of the songs once the album stops, but it’s enjoyable while it lasts.

4. You Are the Quarry

Hailed by many as Morrissey’s big comeback, You Are the Quarry saw the singer gain back control of the charts in a major way. Released in May 2004 as his first album in seven years, it reached number 2 in the UK and number 11 on the US Billboard 200 – his highest entry on the chart to date. It doesn’t take us places Morrissey hasn’t taken us several times before, but as All Music says, even if it doesn’t expand his legacy, it lives up to it.

A gloriously invigorating mash-up of glam rock and rockabilly, Your Arsenal dropped in 1992 to an uproarious reception. The Village Voice’s Robert Christgau called it Morrissey’s “most consistent solo set to date.” All Music called it his best work since Queen is Dead. Everyone (almost) bought a copy. David Bowie covered one of its tracks. Basically. it’s triumphant; if you haven’t already heard it at least a few dozen times, it might be time to put that right.

With his debut solo album, Morrissey proved that even without Johnny Marr by his side, he was still capable of delivering exquisitely crafted indie rock. Lyrically, he’s on fire. switching from the despairing (Little Man, What Now?) to the savage (Margaret on a Guillotine) with effortless grace. His voice has rarely sounded better either, particularly on the album highlights Everyday Is Like Sunday and Suedehead.

Two seconds into the beautiful opening track of Vauxhall and I, and you already know you’re onto a good thing. Considered by just about anyone who’s heard it as Morrissey’s best album (if not one of the best records of the 1990s), Vauxhall and I is a shimmering, layered delight, recalling the singer’s heyday with the Smiths without making the fatal error of trying to replicate it. From the first beat of Now My Heart is Full to the dying note of the viciously witty Speedway, its irresistible.