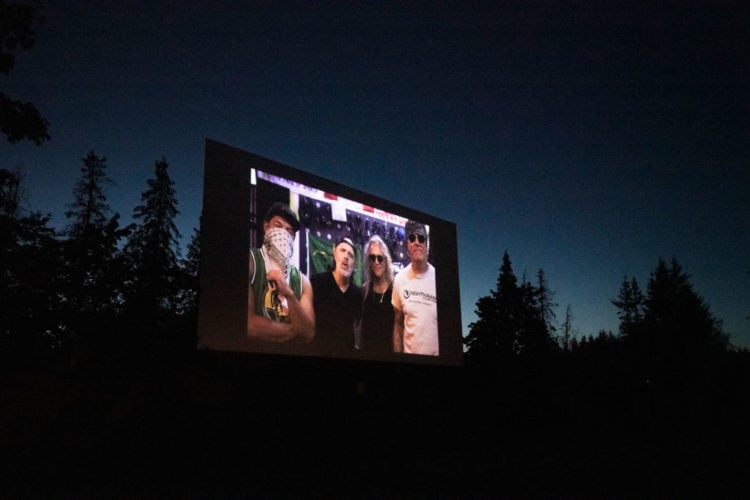 Late in August 1981, Dave Mustaine (lead guitar), James Hetfield (rhythm guitar/vocals), Ron McGovney (bass), and Lars Ulrich (drums), formed the Metallica band as the original members. In late 1982, the band did, however, had to let go of Dave and Ron. To fill the void Kirk Hammett and Cliff Burton swiftly stepped in. Since then Metallica has sold over 125 million records across the world. It is the largest metal band in history. Four years after entering their incomparable career, Metallica has been a great cultural force that has completely transformed the sound of most popular music by coming up with its own rules. According to Loud Wire, Metallica’s myths can appear intractable, leading to more questions and inspiring more debate as their fame develops. Until recently, they have rarely received a certain kind of literary acclaim and critique normally reserved for the greatest rock stars. The band has managed to perform in front of thousands and thousands of followers on each and every continent across the world for over three decades. In 2009, the band was inducted into the Rock and Roll Hall of Fame, which was a substantial high point in their professional life. They’ve also had their share of lows, most particularly the 1986 tour bus crash that claimed the life of highly praised bassist and buddy Cliff Burton.

Metallica is without a doubt the greatest metal band of all time. That barely qualifies as a viewpoint. It has unveiled a special black and white photo book to coincide with the impending 30th anniversary musical commemoration of The Black Album, which will include a star-studded 53-artist record, The Metallica Blacklist, and a recreation of the original album. According to Kerrang, Rose Haven, a renowned British rock photojournalist, captured the Metal band in One on One Studios’ during the Black Album convention and 300-date tour in support of the 1991-1993 albums and will contribute numerous “Posted Images” in the Metallica books. Ross, James Hetfield, Lars Ulrich, Kirk Hammett, Jason Newsted, and Robert Trujillo also gave introductions. “While music and records are mixed, our confidence hits new heights, and we feel much better compared to before about who we are as well as how we view ourselves when shot,” Lars added. The $24.95 Metallica Books explores the musician’s philosophy from the start to the end, focusing on the cultural relevance of each band member, each record, tour, fashion, literature, movies, inspirations, fans, background, and so forth. ” “I believe it’s not just a factual book or anything our fans can look up online,” said writer and music journalist Ben Apatoff. The product is by far the most complete Metallica book so far, encompassing the band’s career from inception until 2021, as well as the first Metallica book to include exposure to the band’s packaged material. The author is the highly regarded autobiography in 2013 “What are you doing here?” based on decades of detailed investigation and decades of excitement, featuring previously unseen images and a preface written by Laina Dawes. The $24.95 Metallica Book finally gave Metallica a comprehensive memoir and assessment that the band deserved, allowing fans to express their ideas of the band as well as its musical tastes.

What’s been stated regarding Metallica’s new album so far?

According to Global News, Trujillo had stated that the record will incorporate aspects from either of their previous two albums, whilst being cooperative and letting frontman James Hetfield contribute ideas. Trujillo informed The Music, “‘Death Magnetic’ was, for the most part, a collaborative endeavor.” “‘Hardwired,’ on the other hand, was much more essential to James’ interesting aspects and was also trying to take the spirit of the mood of the previous record.” “I’m looking forward to the next record since I think this will be a summation of the previous two records as well as a new trip. The joy of being in our band is there has never been a scarcity of unique ideas.” He continued to say.

Are there any solo albums in the works?

Metallica member Kirk Hammett hinted at a solo record the year before, saying it “just wouldn’t look like it is a metal album at all” when explaining what that would sound like. During an interview with Metal Hammer, Hammett stated that he has a lot of solo music “hanging around” that is “clearly not Metallica stuff,” and also that “the collection keeps getting bigger and bigger.” “One of these days, it’ll seem right… I really believe I have a lot to offer Metallica. Perhaps I’ll consider engaging in other stuff when all this feels more successful,” Hammett said. He went on to say, “It wouldn’t look like a metal record at all.” “It will be something strange, with a wide range of genres, yet it’ll be unified around the same time. I wouldn’t be shocked if we all did some alone, autonomous work. Metallica’s roster has changed a few times over the years.

The 17th of September, 1986, was indeed a sad day for the band. As they were on a road, the band was sleeping on their tour van when it toppled over at 4 a.m. Cliff, on the other hand, did not have such good fortune. As the bus flipped, he was actually flung “under it,” crushing him and killing him nearly instantly. Cliff was renowned as the best metal bassist in the world. However, he was also an inspiration to many. Metallica held tryouts for members of their band. The band has gone through a number of roster moves since its beginning. The first band change occurred in 1982 after Cliff and Kirk Hammett replaced Ron and Dave. Following Cliff’s death in 1986, the lineup was changed for the second time. Jason Newsted has joined the band as the new bassist. However, given Clifford Lee Burton is in the lineup, I didn’t think this is a good bet.