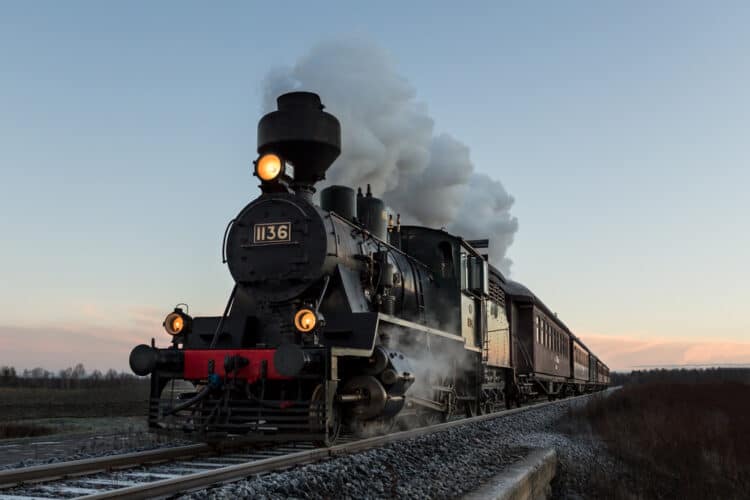 Famous songs about trains range from country to rock, with a little bit of everything in between. While some songs glorify the train’s role in society, others take a more somber tone, talking about the dangers of train travel or the sadness that comes from leaving loved ones behind. No matter what your taste in music is, there’s bound to be a train song out there for you.

The song ‘Slow Train Coming’ is from Bob Dylan’s album of the same name. The song reflects on the often challenging journey of life, but also how ultimately rewarding it can be. Dylan’s song is both uplifting and sobering and is sure to resonate with anyone who has ever felt lost or uncertain in their life. According to Wikipedia, It was released in 1979 and reached number 4 on the Billboard 200 charts. The award-winning album was Dylan’s first foray into gospel music and is widely considered one of his best works.

‘Train In Vain’ is a song off of The Clash’s 1979 album, London Calling. The song was not originally intended to be on the album- it was a last-minute addition, included at the insistence of producer Guy Stevens. The song is about a relationship that lead singer Joe Strummer was in at the time- one where he felt he was always giving more than he was getting back. According to Wikipedia, The lyrics refer to British culture and landmarks, as well as the iconic film Brief Encounter. The song was a big hit for The Clash, reaching #23 on the UK charts. It remains one of their best-known and most-loved songs.

‘Train, Train’ is a song off of Blackfoot’s 1979 album Strikes. The song is about a young boy’s experience with a train, and how it changes his life. The lyrics tell the story of the boy’s encounter with the train, and how it makes him feel. When the train comes into the station, the boy is awestruck by its size and power. He watches as it pulls away, and then he decides to follow it. The boy runs after the train and eventually catches up to it. He climbs aboard, and the train takes him on a journey to a new place.

Locomotive Breath is a song by the English rock band Jethro Tull. It was released as a single in 1971 and is included on the band’s fourth studio album, Aqualung. The song is about a locomotive out of control, and the singer’s fear of it. It is one of the band’s most popular songs and is often considered to be a classic rock song.

It is a song about a train coming, and the narrator is begging for it to stop so that he can get on board. The song is full of sound effects that imitate a train, including the sound of whistleblowing and wheels clacking on the tracks. When Hendrix performed the song live, he often extended it with improvisational sections. The song was first recorded by Johnny Winter in 1968, but Hendrix’s version is the best known.

AC/DC’s “Rock N Roll Train” is a high-octane ode to the mighty locomotive. The song opens with the sound of train whistleblowing and then proceeds to roll through a heavy metal landscape powered by Angus Young’s signature guitar licks and Brian Johnson’s raspy vocals. The train metaphor is used throughout the song to describe the unstoppable force of rock n roll, and by the end of the track, it’s clear that AC/DC are the engineers driving this particular train.

It is an awesome song by Ozzy Osbourne and it is about a train. The song is actually about the dangers of drug abuse, but the metaphor of the train is used throughout the song. According to Billboard, The train represents the addiction that is taking over the person’s life and derailing them from everything they once held dear. The song is a warning to anyone who is considering using drugs, as it can lead to a crazy train wreck of a life.

This song is about a train that runs through the night, carrying people to their destinations. It is a fast-paced and exciting song that features some great guitar work from Slash. The lyrics paint a picture of a busy, bustling train station where people are rushing to catch their train. The song is full of energy and excitement, and it is sure to get your adrenaline pumping.

This song is a classic rock anthem about a train that just keeps on rolling. It’s a song about freedom and the open road, and it’s one of Aerosmith’s most famous songs. It’s a great song to listen to when you’re feeling restless and want to just keep moving. The song has been covered by many artists, including Johnny Cash, who recorded it for his album American Recordings. The song has also been featured in movies like Thelma and Louise and True Romance.

Trains have been a popular subject for songs throughout the years. There are many great songs about trains that capture the feeling of travel and adventure. These 10 songs about trains are some of the best and most popular. Each one captures the spirit of travel and adventure that is associated with trains. Whether you are a fan of trains or not, these songs are sure to get you excited about travel.