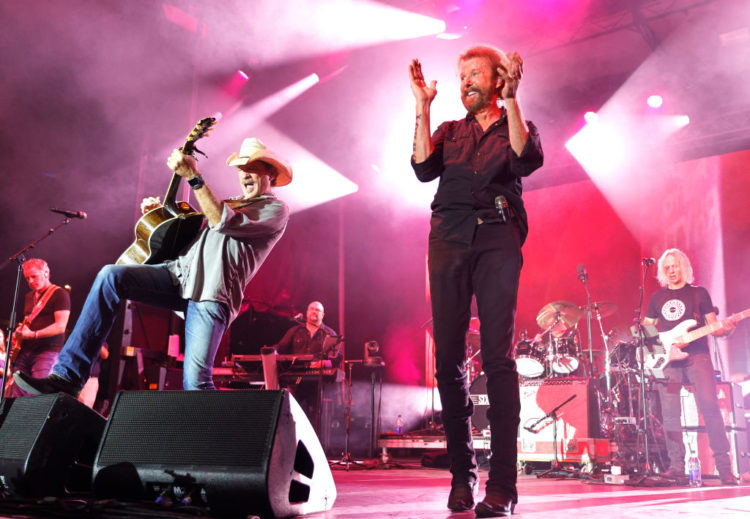 The duo talent of Kix Brooks and Ronnie Dunn officially formed Brooks and Dunn in 1990 after Tim DuBois suggested they do so. Prior to working as a duo, both American country music artists performed solo acts, each of them charting with their own material in the 1980s. In 1991, Brooks and Dunn signed a recording contract with Arista Nashville and have since recorded and released a total of eleven albums, as well as five compilation albums for the label. Throughout their career as a duo, they released fifty singles where twenty of them reached number one status on the Hot Country Songs charts, along with nineteen more to crack into the top ten. The honky-tonk influence Brooks and Dunn are best known for with their material also featured hints of mainstream country and rock, which added to the duo’s fan appeal. While a few critics felt their style seemed too formulated, their methods worked as they received more than just a large collection of chart-topping classics fans still stomp to today. They’ve also been nominated and won many music awards, as well their songs and albums receiving multiple certifications from music industries all over the world. For the first twenty years of their time together as a duo, Brooks and Dunn performed what was supposed to be their last concert together on September 2, 2010, at Nashville, Tennessee’s Bridgestone Arena. While for five years they did not perform as a duo act, Kix Brooks and Ronnie Dunn continued recording and performing as soloists. Then, in 2015, the two reunited and performed a series of concerts with Reba McEntire in Las Vegas. Since then, Brooks and Dunn have continued to record and perform.

Released in June 2005 from their album (Hillbilly Deluxe), features what would be the 20th and final number one hit registered with the US Billboard Hot Country Songs Chart. Ronnie Dunn was inspired to write the song (Play Something Country) while in Minnesota, after finishing a show that also featured Gretchen Wilson as she was on tour with them at the time. Since its release, the single has sold enough copies to earn Gold Certification from the Recording Industry Association of America (RIAA).

Ranked as number one on the charts with the US Billboard Hot Country Songs, as well as number one with Canada Country Tracks, the hit single (She Used to Be Mine) comes from the duo’s 1993 album (Hard Workin’ Man). Many country music fans often comment how much they’d rather hear the music style stemming from Brooks and Dunn as opposed to what’s being released today. The uniqueness of the duo’s talent proves they stand the test of time as classic all-time favorites.

From the 1994 album (Waitin’ on Sundown) comes the single (Little Miss Honky Tonk), which peaks to number one with the US Billboard Hot Country Songs Chart and Canada Country Tracks. The song was not released as the album’s third single in February 1995. Fans and critics comment what makes Little Miss Honky Tonk so popular is having a country-themed ballroom queen feel to it.

Peaking at number one in 1995 with the US Billboard Hot Country Songs Chart and Canada’s Country Tracks, (You’re Gonna Miss Me When I’m Gone) is praised for its craftsmanship by music critics. The single comes from their album (Waitin’ on Sundown), which was released on September 27, 1994. The performance illustrates a frustrated man who is fed up being mistreated by his woman and is ready to move on from a relationship he knows isn’t going anywhere.

6. She’s Not the Cheatin’ Kind

Serving as the lead single from their 1994 album (Waitin’ on Sundown), the chart-topper earns its respect with the US Billboard Hot Country Songs Chart and Canada’s Country Tracks. Fans of Brooks and Dunn often comment how much they appreciated the brand of music the duo put forth, one hit after another.

Coming from the 1998 album (If You See Her) is the hit single (How Long Gone), which reaches number one on the US Billboard Hot Country Songs Chart and Canada’s Country Tracks. Considered as a national treasure by their fans, this song demonstrates aside from being a chart-topper it’s also a solid country classic.

Released in December of 1993 from the album (Hard Workin’ Man), the single (Rock My World) remained on the US Billboard Hot Country Songs Chart for twenty weeks, reaching as high as number two in March 1994. On the US Billboard Hot 100, it also charted at 97th place but fared best of all with the Canada Country Tracks at the number one spot.

Credited as the song to re-ignite country line dancing, (Boot Scootin’ Boogie) was released from their 1991 debut studio album (Brand New Man). It also topped the charts, namely Canada’s Country Tracks and US Billboard Hot Country Songs. There is also a dance remix of this big hit that’s featured on the duo’s 1993 album (Hard Workin’ Man).

The leading track from the album of the same name was released in 1993 and reached number one with Canada’s Country Tracks and number four with US Billboard Hot Country Songs. It also won a Grammy Award in 1994 for Best Country Performance by a Duo or Group with Vocal.

During the 1997 Grammy Awards, Brooks and Dunn win Country Performance for a Duo or Group with Vocal with the hit single (My Maria). This is actually a cover song of the original version, recorded and released in August 1973 by B.W. Stevenson. In his day, the song cracked into the US Billboard’s Top 10 and remained within the Top 40 for twelve weeks. The version from Brooks and Dunn did even better as it peaked at number one on the charts of Canada’s Country Tracks and US Billboard Hot Country Songs when it was released in 1996.