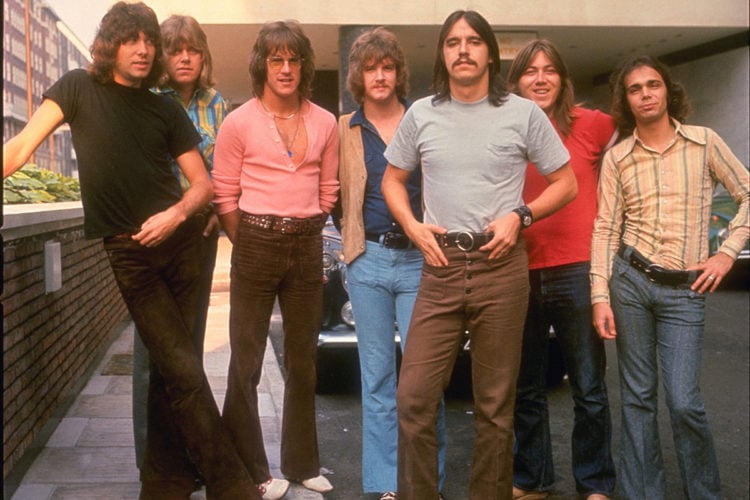 In 1967, Chicago was born. Originally consisting of Peter Cetera, Terry Kath, Robert Lamm, Lee Loughnane, James Pankow, Walter Parazaider, and Danny Seraphine, the band were a rock and roll outfit with a taste for horns, jazz, and experimentation. Their debut album, Chicago Transit Authority, bagged them a Grammy nomination but didn’t secure a single chart hit. That was the last of their albums that didn’t. From there on, Chicago ruled, first as rockers and latterly as purveyors of easy listening ballads. Several decades and numerous lineup changes down the line, they’re still filling stadiums, still selling records, and still showing the world the power of a good horn section. Everyone’s got their favorite song, but here’s our take on the 20 best Chicago songs of all time.

Kicking off our list of the top 20 Chicago songs of all time is Poem 58. Contrary to what you’d expect from the title, the song isn’t in the least bit poetic… unless you consider Terry Kath shredding his way into the stratosphere with one of the deepest acid grooves on record poetic (and you’d have a point if you did). For the first five minutes are so, it’s an instrumental rave-up. Robert Lamm does eventually kick in with the lyrics, but even then, the spotlight stays on the snarling guitars. Santana would be proud.

After opening with a burst of vicious guitars, Old Days settles down into a Carpenter-esque nostalgia ride with chirping horns, lush strings, and wistful lyrics. It’s not a complete saccharine fest though, with the fuzzy guitar and thunderous organ supplying just enough beef to keep things moving.

Colour My World finds trombonist James Pankow getting creative with metaphors and using color to represent the love in his life. They’re pretty lyrics and Kath does them justice with his creamy vocals. The star of the show, however, is Walter Parazaider’s haunting flute solo, which adds just the right element of whimsical fancy to proceedings. Lamm’s weary-sounding piano isn’t exactly hard on the ears either. According to somethingelsereviews.com, Frank Sinatra was impressed enough with the song to want to record a version, but only on the condition Pankow wrote another verse. Pankow was of the opinion that one verse was more than enough, so kindly declined the offer. “As much as I was thrilled to the bone by Mr. Sinatra asking me to do this, because he wanted to perform the song, I felt that I was violating the purity, the essence of the song that represents a very, very intimate special moment to me in terms of its composition,” Pankow explained.

Sure, it’s sappy, and sure, it’s very much a product of its time, but ’80s production values aside, You’re the Inspiration is a stunningly good song, with an immense chorus that’s impossible to resist. It dominated the airwaves in the 1980s, scoring the band a No. 3 hit on the Hot 100 and helping to shift millions of copies of Chicago 17.

In 1969, Chicago released Chicago Transit Authority, a sprawling, wonderful debut stuffed with experimental rock songs but completely lacking in hits. Their next album, Chicago II, was also experimental, but this time around, it managed to produce two top-10 singles. After that, the only way was up. By the time Chicago came round to releasing their third album, they knew exactly what a hit was and how to make one. Hence, Free, a funky piece of jazz-rock with enough energy to run all the way to No 20 on the Billboard Hot 100.

Hard to Say I’m Sorry was a runaway hit, spending two weeks at No. 1 on the Billboard Hot 100 and earning the band their first top 50 hit since No Tell Lover in 1978. Which is nice and all, but with such huge success comes a problem – namely, how do you follow it? If you’re Chicago, you release a lean, mean piece of soft rock like Love Me Tomorrow. It didn’t quite replicate the success of Hard to Say I’m Sorry, but it still charted at a respectable No. 22 on the U.S. Billboard Hot 100 chart and No. 8 on the adult contemporary chart.

Chicago’s debut studio album, Chicago Transit Authority, didn’t produce any hit singles, but that’s not to say it flopped. If anything, it flew, earning the band a Grammy Award nomination for 1969 Best New Artist of the Year and occupying a place in the Billboard Hot 200 for a record-breaking 171 weeks. It eventually certified double platinum and, in 2014, was inducted into the Grammy Hall of Fame. So, definitely not a flop. What also isn’t a flop is the track I’m a Man, a hard-rocking cover of the Spencer Davis Group hit that features a beguiling vocal interplay between Kath, Cetera and Lamm and some face-melting shreds from Kath.

By 1973. Chicago were on the cusp of transitioning away from the hard rock experimentation of their earlier days into a more pop-centric sound. Feelin’ Stronger Every Day captures them at the turning point. It’s still fizzing with rock and roll energy, but there’s a new radio-friendly quality to the overall sound. Whether you approve of the change or not, there’s no denying the brilliance of Danny Seraphine’s drum patterns

As billboard.com says, Just You N’ Me is unquestionably Chicago’s greatest love song. According to Pankow, he wrote the song after an argument with his girlfriend. “We had a disagreement, and rather than put my fist through the wall or get crazy or get nuclear, I went out to the piano, and this song just kind of poured out,” he later recalled. Simple, concise, and utterly passionate, it peaked at No.4 on the Hot 100, becoming the highest-charting single from the excellent Chicago VI album.

After building a reputation for their sprawling double albums (or, as in the case of their fourth album, quadruple albums), Chicago dialed things down for their fifth album. The single LP Chicago V is a tight, concise album that despite its relative simplicity, still manages to incorporate plenty of experimentation, including this very fine jazz-rock opener.

When Chicago burst onto the scene with their debut single Questions 67 and 68, the silence was deafening. Nobody played it, nobody bought it, and had its accompanying album not proved to be such a resounding success, it would have disappeared without a trace. Which would have been a criminal shame. Lamm delivers an astonishingly confident piano performance, ably accompanied by some blaring horns and some swaggering vocals from Cetera.

9. Something in This City Changes People

Something in This City Changes People was never released as a single, but it still stands out as one of the band’s most popular songs. A melancholy ode to urban life, it features an outstanding vocal interplay between Lamm, Kath, and Loughnane and some equally memorable piano playing from Lamm.

The single LP Chicago V may have been scaled back in comparison to the band’s previous output, but it still manages to pack in a huge variety of musical styles. Dialogue Parts 1 & 2 is intriguing, with Peter Cetera and Terry Kath exchanging lines and vocals in the manner of an actual conversation. The world-saving message of the lyrics is a little naive, at least when listened to with 21st-century ears, but the gospel-inflected undercurrents and Cetera’s silky vocals are dazzling.

Chicago II’s dazzling, seven-part suite Ballet For a Girl in Buchannon is nothing short of extraordinary, and certainly one of Pankow’s greatest ever songwriting achievements. It’s best listened to in its entirety, but considering the strength of the material, you can’t blame the record company for extracting the Make Me Smile section and releasing it as a single. A buoyant, booming piece of rock with some superbly impassioned vocals from Kath, it earned the band their first-ever Hot 100 top 10 hit.

As smoothradio.com says, If You Leave Me Now was the song that brought Chicago to a truly mainstream audience, reaching the top spot in the UK and US in 1976. This was the point the band abandoned any pretense of still being hard rockers and settled into easy listening. From here on in, it was radio-friendly pop all the way. Still, it’s a blindingly good song, with a french horn centerpiece, a heartfelt lyric, and more emotion than even Cetera can ooh-ooh his way around.

Chicago may have dominated the 70s, but the 80s were a brand new decade with brand new sensibilities. Was there still a place for a bunch of rapidly aging rockers? Apparently so. The piano-led Hard to Say I’m Sorry propelled them back to the top of the Hot 100, giving the band their first top 50 hit since No Tell Lover in 1978. Later that year, it scooped its writer, Cetera, an ASCAP Pop Music Award for the song in the category, Most Performed Song.

4. Does Anybody Really Know What Time It Is?

According to All Music, Does Anybody Really Know What Time It Is? was the first time the band had ever recorded together. “We tried to record it as a band, live, all of us in the studio at once,” Parazaider has recalled. “I just remember standing in the middle of that room. I didn’t want to look at anybody else for fear I’d throw them off and myself, too. That’s how crazy it got.” Whatever first-night nerves the band were feeling don’t come across on the song. Following the success of the band’s second album, Columbia revisited the track and release it as a single. It climbed to No. 7 in the U.S., becoming Chicago’s third straight Top 10 single.

3. Saturday in the Park

If there was one song that defined the summer of 1972 more than any other song, it was Saturday in the Park. For a while, you couldn’t turn on the radio without hearing it. Fortunately, it’s the kind of song that stands up to repeat listening. Pure, joyous, and fabulously celebratory, it’s a shimmering piece of sunshine pop. It soared to No.3 in the charts, becoming the band’s biggest-selling single up to that point. Fun fact: according to Song Facts, Robert Lamm openly admitted to basing the melody of this song on You Won’t See Me by The Beatles.

Ultimateclassicrock.com describes the closing track on side one of the band’s debut LP, as an eight-minute tour de force. They’re not wrong. Neither are they wrong in describing the edited-down version as one of Chicago’s finest ever singles. It failed to chart the first time around, but when Columbia decided to mine the band’s debut album for hit two years later and re-released it, it scored them a very satisfying No.7 on the Hot 100.

Before they became best known as purveyors of easy listening and pop ballads, Chicago could rock harder and roll faster than any other band around. Terry Kath can’t take all the credit for that, but on.25 or 6 to 4, it’s his mind-blowing riffs that take things stratospheric. Since its release in 1970, the band has closed almost every set with it, and for very good reason – there’s nothing else that can top it.