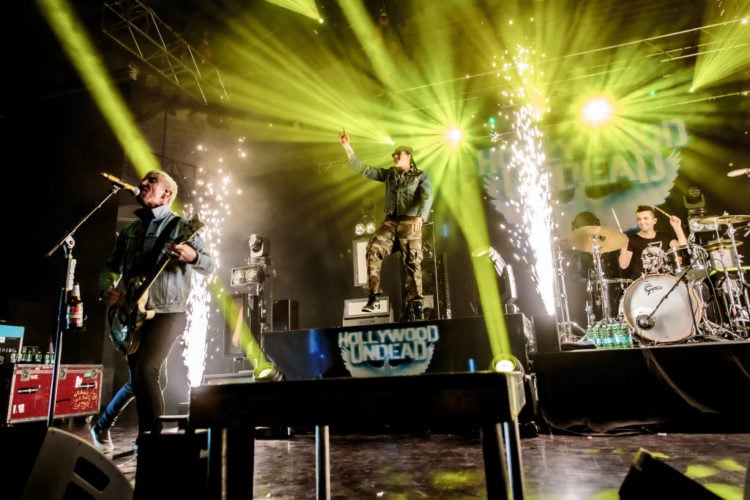 Hollywood Undead was founded in June 2005 in Los Angeles, California. According to Ace Showbiz, the group’s name was picked from a song called The Kids. The co-founders of Jorel “J-Dog” Decker and Aron “Deuce” started posting videos on MySpace. Additionally, they posted they were looking for other people who could play. Soon they recruited George “Johnny 3 Tears” Ragan, Jordon “Charlie Scene” Terrell, Dylan “Funny Man” Alvarez, and Matthew “Da Kurlzz” St. Claire. It was a challenge finding a record label early on because the group was so unique, and they wanted to find one that wouldn’t try to repackage them. They signed with MySpace Records but were told they needed to tone down their album. Hollywood Undead left the label and signed with A&M/Octone, where they released Swan Songs in September 2008.

Two years later, Deuce left the group and was replaced by Danny Murillo, a former American Idol contestant. The new lineup toured with Avenged Sevenfold on The Nightmare After Christmas Tour before releasing their second album, American Tragedy, was well-received by fans and critics. In January 2013, they completed another tour. They released the album Notes From The Underground, which debuted at number 2 on the Billboard Top 200 and reached number one on the Canadian Album Charts. The group released several songs as singles before the March 2015s album Day of The Dead dropped. Since their contract with Interscope records was over, the group created their own label Dove & Grenade Media, which collaborates with BMG. In 2017, the group released the album Five, followed by Psalms in 2018. During this time, the group began to evolve their sound; New Empire Vol. 1 was released in 2019, followed by a second similar album New Empire Vol. 2. Both albums explored a heavier sound with the influences of electronic music. These are the 10 best Hollywood Dead songs of all time.

The song starts out with thunder, lightning, and a protest. The song is about a city under siege, which uses driving drum beats and propulsive drum licks to illustrate social unrest. Throughout the song, there is a more lifting chorus that counterbalances the galvanizing lyrics. Near the end, a brief electric guitar solo creates a pause in the overall piece and segues back to the rhythm that weaves its way through most of the song.

Hollywood Undead starts the song with heavier electronic beats, then switches genres returning to a rap beat that is a throwback to earlier rappers of the 90s. Another standout on this song is they rely on lyrics that are typically in a country song but reimagine them with a fresh beat.

A combination of sonic beat drums and guitar start this song. Like much of the group’s catalog, it’s a darker reflection of the darker side of society. Hollywood Undead’s lyrics explore many of the worries that keep people up at night with an unsettling style that still comes across as a well-constructed song.

Instead of combining electronic and instrument combinations, the group undoes their typical sound for a drawn-out sonorous beat. After the interlude, the song returns to a driving rap beat laden with confident lyrics. Stylistically, the song is well done because the music seamlessly goes back and forth between simple instrumentation focusing on vocals to a forceful beat with a perforated drum beat.

This song takes on the battle between good and evil with many religious overtones. However, it’s the antithesis of an anthem. Instead, the group expresses their strong feelings about the hypocrisy evidenced in many people’s faith.

The song starts out with a fun beat similar to New Wave, making it one of the groups more uptempo and light songs. The rhymes in this song are more mellow than other songs, which creates a fun lyrical romp. Several fades bring the lyrics to the forefront throughout the song but still keep with the pop-rock undertones.

This song is a weekend party song for 20 somethings who enjoy tying one on. It’s a song that is well suited for a rush week in a fraternity. Nonetheless, it’s an overall fun beat with a catchy chorus. One of the genius things about Hollywood Undead is modernizing some of the classic rhythms and sound from previous decades while making it seem fresh and relevant.

The opening to the piece is a bright collection of bells. The lyrics are lighthearted and fun, with a simple message twisted into more complicated lyrics. If you listen with a soft ear, you’ll hear a song with an uptempo beat. Yet, if you listen with a more critical ear, the lyrics are more like The Kids are Alright by The Offspring.

Hollywood Undead delivers another rap power anthem for disenchanted youth. Many more issues face people today, which gives people an inner rage that is often not brought to life. Within the beat and lyrics of this song, there is dominating unrest found in a musical voice. The song’s chorus is a collective chant for people to join behind and lends itself to its turmoil. Even though the lyrics are definitive, many parallels can be drawn.

The intro to this song is surprising since it has elements of Mariachi. Yet, as the lyrics progress and the group circles back to their original sound, it becomes another series of beats and words twisted and funny with catchy refrains that overshadow many of the other elements in the song. Hollywood Dead has a way with catchy beats that make you want to sing along with the lyrics no matter what they are. This song is the group in their proper, unabashed style.