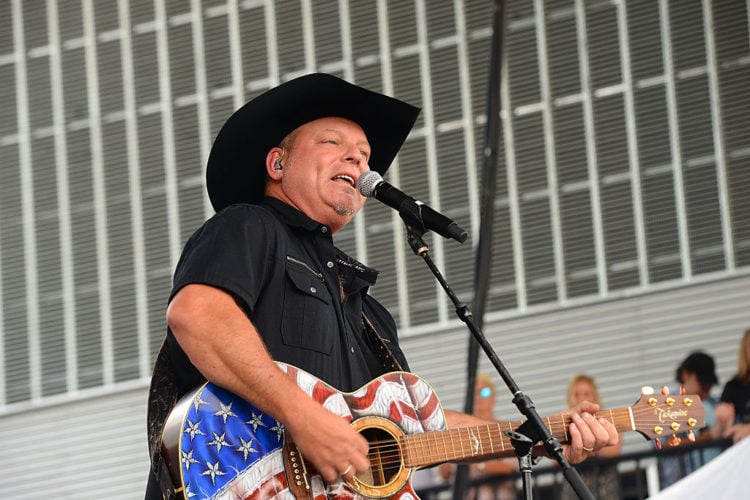 John Michael Montgomery is a country music artist that has sung with his brother as half of the group Montgomery Gentry and through his own solo career. Over the years, he’s had a number of songs that are memorable for one reason or another. As a matter of fact, he has cemented a reputation for himself as one of the most well-loved country artists of his time. As a result, a lot of people have heard his songs over the years. That said, not everyone is entirely familiar with his music. If you’re in the mood to find some new favorite music, you might go through this playlist of 10 of his most notable songs, ranked from number 10 to number one. There’s a YouTube link for each song so you can check out every one of them for yourself and see which ones you like best.

If you’re having a rough day or you have a tendency to be a bit emotional about things, you may want to get a box of tissues before you listen to the song. It talks about missing someone and how those feelings are actually triggered by hearing a certain song. This particular song goes on to talk about how the subject in the lyrics often picks up a guitar and plays a favorite song of the missed individual in an attempt to somehow feel more connected.

Here is a beautiful song that reaffirms the thought upheld by so many individuals that if you have someone that truly loves you, there’s virtually nothing that you cannot achieve. It is truly amazing what love can do. It can help a person achieve things that they never imagined were possible, not even in their wildest dreams. It can heal someone who is so broken that they believe they will never be whole again. In some cases, love can even bring someone back from the brink of death, providing that singular thread, however thin it may be, that allows them to hold on instead of giving up.

Anyone who has ever had a child that grows up and moves away knows that it can be a very trying time, even though it’s perfectly natural. This is a song that speaks to that in the sense that an older person is writing to his son. The song is rather sad in the sense that the father says that he doesn’t have much going on and that everyday is more or less like the day before it. At its core, the song talks about a person who dedicated his life to being a dad and now that his son is grown, he doesn’t really know what to do with himself.

This particular song tends to be a bit more fun. It talks about going to a county auction in order to buy something, but instead falling in love. The song serves as a tongue-in-cheek example of finding the love of your life at an auction and bidding on that love. It’s all done in a very fun way with an upbeat tempo so it’s something that tends to appeal to a lot of fans.

This song directly addresses the fact that a lot of people don’t tend to believe in love at first sight. As a matter of fact, that is the first line in the song. It goes on to say that the individual singing the lyrics has indeed fallen in love at first sight and he is hoping that the person he has fallen in love with has not only noticed him, but also feels the same way.

This song talks about loving someone from afar, yet always feeling sad because the subject that is loved doesn’t appear to feel the same way. However, it goes on to talk about finding out that the individual does indeed have those exact same feelings and that they simply never let them show because they were thinking that their own feelings were not reciprocated. The beautiful thing about the song is that it eventually talks about two people who come together and it reinforces the idea that when you love someone with all your heart, even when you have all of these fears and doubts that it won’t work out, you can always hope for the best because sometimes, it works out even better than you could have ever hoped it would.

This is definitely one of the more poignant songs ever performed by the artist. It speaks of a little girl that is born into a family of addiction and fighting that becomes physical, almost on a nightly basis. It talks about how the little girl is there to witness all of this until the fighting becomes so bad that the father eventually murders her mother and then himself. At the beginning of the song, it talks about how she’s never been to Sunday school or been taught anything about the Lord in any capacity, yet when authorities take her away and she goes to a new family, they take her to Sunday school and she says that she knows the person on the cross because he was there by her side to comfort her the night that both of her parents died. Whether you are a devout believer or you don’t know what you believe, this is a song that will definitely make you stop and think at the very least.

This is a song that talks about not having a lot in the way of material possessions, but loving someone so much that there is nothing that the individual wouldn’t do for them. In short, it talks about being rich in the only way that actually matters, and that is about loving someone with your whole heart.

Just like the title implies, the song talks about loving someone the way that they truly deserve to be loved. It goes on to talk about loving an individual who hasn’t always been loved properly. More importantly, it works to convey a message of correcting that by showing the individual in question the type of love that every person deserves to have.

This is one of the more uncomplicated songs by the artist, but it’s also one that a lot of people resonate with. Just as the title implies, it talks about being in love and loving how that other individual shows their affection. It’s a beautiful song about the day-to-day life of a couple in love which is probably why so many people love to listen to it themselves.