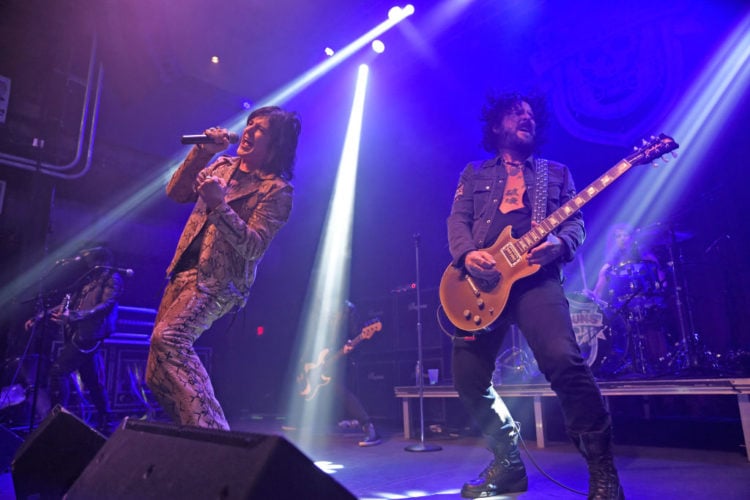 Since the MTV days when Nelson, Motley Crue, and Cinderella ruled the airwaves, hair metal has grown a lot in popularity. However, the music genre was still prevalent in the early 1980s when L.A. Guns, a California-based band, started to gain mainstream attention. L.A. Guns was formed in 1983 and was initially composed of Tracii Guns and Rob Gardner. The band has undergone numerous changes in its lineup. The band’s current members include Tracii Guns, Phil Lewis, Scot Coogan, Ace Von Johnson, and Johnny Martin as the backup vocalist. The band has released a total of fourteen studio albums as well as several live compilations. In 1999, the classic band members reunited and started to record new songs. Here are 10 of the best L.A. Guns song that you can listen to.

The reunion of Tracii Guns and Philip Lewis under the L.A. Guns name was always going to revive the classic 80’s hard rock and heavy metal scene. With the release of the track “Speed,” fans had been rewarded for their patience in waiting for the reunion of this band. “Speed” is one of the greatest songs from their album, “The Missing Piece.” Phil Lewis’ vocals and Tracii Guns riffs combine well through the song.

Regardless of the band’s lineup, L.A. Guns had already established a timeless sound. “Vampire” is my favorite track from the band’s 2005 album Tales From The Strip. It was the second album to feature Stacey Blades as the guitarist. The track has a Hollywood feel to it, and the chorus of the song is quite catchy. Despite the incredible lyrics to the music, Phil Lewis’s range of vocals helps the song earn the number nine spot in our list of the greatest L.A. guns songs of all time.

8. Nothing Better To Do

Vicious Circle album by L.A. Guns saw the return of Steve Riley during the album tour while Guns left before the recording of the album, which had even prompted the band to change its name to L.A. Nickels after Kelly Nickels, the band’s bassist. The album is dominated by vocals from Phil Lewis on all tracks except “Nothing To Do,” whose lyrics were done by Kelly Nickels.

The fantastic guitar riffs and an even better chorus make this song a favorite for L.A. Guns fans. The song’s chorus, which Phil Lewis did, makes us believe that Phil Lewis must have been the most underrated frontman in history. The song is about a lady who doesn’t feel satisfied with the efforts of her man. Something most ladies can relate to. The track is contained in the band’s 1989 album, Cocked and Loaded. The video of the song depicts the band performing on a white stage amidst screaming fans wearing 50’s clothing.

If you are going through a divorce or a break-up, “It’s Over Now” is the perfect song. It will lift your moods and make you want to shake your body a bit. The video of the song features some black and white shots of the band in a huge empty hall. The band lays around as Phil Lewis sings while looking at a woman through the window.

A romantic relationship is not always supposed to be perfect. However, you should always do your best. As the band puts it in the lyrics, “Doing time for your baby.” “Sleazy Come Easy Go” is the fourth track from L.A. Guns’ hit album Cocked & Loaded. The whole song is fun to sing along with, and it has gotten a considerable amount of airplay on the airwaves.

In contrast with the pop-metal style that is common in most songs throughout the album, Hollywood Vampires, “Over The Edge,” is a somehow darker song than the rest of the songs in the album. Nevertheless, you will love the live version of the song, which features some great harmony vocals from Michael Grant, Tracii’s solos, and Johnny Martin riffing. On the other hand, Phil Lewis sounds as good as he has ever been.

The number two track in our list of the best L.A. Guns songs is the track “Sex Action,” a hot rock from the band’s 1988 self-titled release. Featuring amazing Phil Lewis natural vocals and infectious guitar melodies from Tracii, this track is the definition of action-packed. The song remains one of the band’s most requested hits during their concerts and also on the radio. It is the track that catapulted the band to the forefront of the 80’s rock and metal scene.

1. The Ballad of Jayne

Arguably the most loved L.A. Guns’ song of all time tops our list of their greatest ever releases. “The Ballad of Jayne” is contained in the band’s 1989 album Cocked & Loaded. The song was a dedication to video vixen and actress, Jayne Mansfield who died in a car accident in 1967. The song peaked at position 33 in the US Billboard Hot 100 and position 25 in the US Billboard Mainstream Rock.