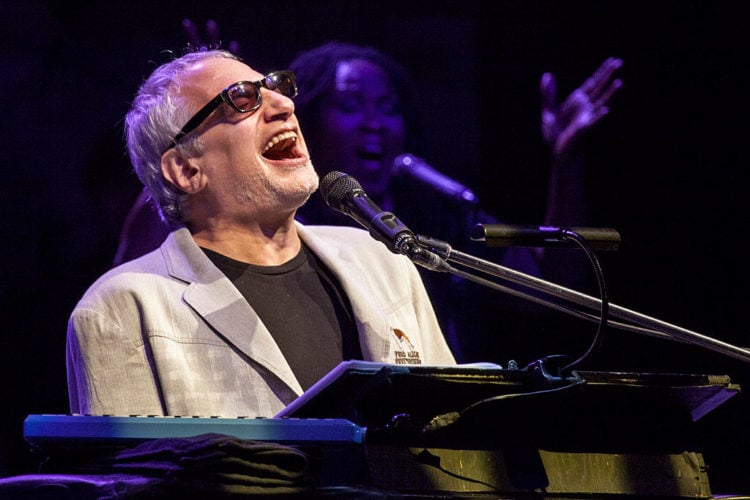 Steely Dan is considered one of the greatest bands of all time to combine pop, rock, jazz, Latin and rhythm and Blues music styles with their complex style, cryptic lyrics and sophisticated recording style. Founding members Walter Becker and Donald Fagen met while students at Bard College in Annandale-on-Hudson, New York in 1967. Following their graduation, the friends moved to Brooklyn where they recorded demos and played in cover bands. While playing for the touring band Jay & the Americans, the band’s Kenny Vance, introduced Becker and Fagen to Gary Katz. After Katz moved to Los Angeles to work as a staff producer for ABC Records, he recruited Becker and Fagen to be staff songwriters. Becker and Fagen formed their own band, Steely Dan, and began recording with Katz as their producer and Roger Nichols as their engineer. Becker and Fagen were beat nicks and based many of their songs on beat nick books and drug culture. They named their band Steely Dan in reference to William S. Burroughs’ novel Naked Lunch which refers to a revolutionary steam powered dildo. Throughout their career, Steely Dan produced many albums that were critically and commercially successful. Here are the 10 best Steely Dan Albums.

While not a studio album (Steely Dan only recorded 9), Alive In America is a record of a compilation of Steely Dan live shows. Becker and Fagen reunited in 1994 after an extensive break following the release of Gaucho in 1980. The band toured arenas much to the delight of their fans from the 1970s. Listening to Alive In America is a nostalgic way to revisit Steely Dan’s successful recordings. The band featured several great musicians for the tour including George Wadenius on guitar, Dennis Chambers on drums and Chris Potter on sax.

After some nostalgic Steely Dan tour performances in the 1990s, Fagen and Becker reunited in 2000 to record Two Against Nature. The success of that album led the pair to record a ninth and final album in 2003, Everything Must Go. This would be Becker and Fagen’s last collaboration before Becker’s death in 2017. This final item received mixed reviews but Fagen felt it was underrated. Singles include “Blues Beach”, “The Last Mall” and the title track “Everything Must Go”. The album also featured a controversial song “Godwhacker” penned by Fagen after the death of his mother from Alzheimer’s. During the tour favor the album Becker and Fagen were featured on HBO’s “Taxicab Confessions” during the Las Vegas leg of their tour. A DVD, “Steely Dan Confessions” was released.

Gaucho was released in 1980. It was Steely Dan’s seventh studio album and took 2 years to record. The album includes 42 different musicians. One of the reasons for the lengthy recording is a strained relationship between Becker and Fagen. Becker also spent 6 months in a hospital recovering from injuries sustained when he was hit by a car. He continued to work with Fagen by phone during his recovery. The album’s singles included “Hey Nineteen”, “Babylon Sisters” and “Time Out of My Mind”. Gaucho won the Grammy Award for Best Engineered Non-Classical Recording. Despite its success Becker and Fagan stopped recording for the next 20 years.

Can’t By A Thrill was released in 1972 as Steely Dan’s debut album. Written by Becker and Fagen, it was a blend of soft rock, folk rock and pop rock and jazz styles which would define the band in albums to come. It was a commercial success reaching #17 on the Billboard 200 Chart and certified platinum. The title is in reference to a Bob Dylan song. Singles include “Dallas”, “It Again” and “Fire In the Hole”, a reference to the Vietnam War.

Two Against Nature was Steely Dan’s much awaited album in twenty years. The band’s eighth studio album was released in 2000. It’s singles included “Gaslighting Abbie”, “Cousin Dupree” and “West Hollywood”. It was a commercial success reaching #6 on the Billboard 200 Chart. The band also toured again. The album won several Grammy awards including Album of the Year surprising the nominees which included NSYNC, Brittany Spears, Radiohead, Beck and Eminem.

Katy Lied reached #3 on the US Charts and was Steely Dan’s fourth certified gold album. It was also the first Steely Dan album that did not feature all of the five key session members of the group. Jim Hodder, Denny Dias and Jeff “Skunk” Baxter left the band. Baxter went on to play for the Doobie Brothers. Katy Lied and Steely Dan were a success despite losing those members. Becker and Fagen continued to use professional session musicians to fill the void. Rolling Stone’s Cameron Crowe gave the album a good review and noted that it includes a variety of tempos and was a “harbinger” of the Steely Dan albums to come. Katy Lied includes Michael McDonald on back up lyrics. It features popular singles including “Black Friday”, “Doctor Wu”, Bad Sneakers” and “Daddy Don’t Live In That New York Anymore”.

Pretzel Logic was both critically and commercially successful. Steely Dan’s third studio album was released in 1974. It was different than the band’s first two albums because its songs were shorter and less instrumental. They were written in the typical 3 minute pop song format. Songs featured more piano than prior albums with more of a blues style and jazzy choruses. Singles included “Rikki Don’t Lose My Number”, “Horace’s Silver, “Parker’s Band” and “Song For My Father”. The album reached #8 on the Billboard 200 Chart and was Steely Dan’s third Gold certified album.

The Royal Scam was released in 1976 and is Steely Dan’s fifth studio album. It climbed to #15 on the Billboard 200 chart and was certified gold. The album has a lot of guitar. Becker and Fagen hired several professional guitarists to record including Denny Dias, Larry Carlton, Elliot Randall and Dean Parks. It also featured session drummer Bernard Purdie. The single “Haitian Divorce” quickly became a hit in the United Kingdom. One of the most popular singles “King Charlemagne” which is loosely based on a hallucinogen drug maker in Hans Bauman’s book “Cave of Altimara” and Charles Keats’ poem “Ode to a Grecian Urn”.

Countdown to Ecstasy was Steely Dan’s second studio album and considered one of their best. Released in 1973, Steely Dan’s style was already established and critics loved it. The album was recorded at Caribou Ranch in Colorado and a recording studio in Los Angeles. David Palmer sang vocals on Steely Dan’s previous album and on tours, but Katz convinced Fagen to perform the vocals on all of Countdown to Ecstasy’s songs even on tour which Fagen was hesitant to do. The album features the popular song “My Old School” which has apparent references to a drug bust that Becker and Fagen were involved in at Bard College. The opening song on the album “Bodhisattva” is about spiritual enlightenment that can only be received if material possessions are disposed.

Aja (pronounced “Asia) was Steely Dan’s sixth studio album released in 1977 and considered their best critically and commercially. It features songs with Steely Dan’s classic mix of pop rock blended with smooth jazz, sophisticated chord changes and perfectionist production. The first single “Peg” featured Michael McDonald on backing vocals and several professional instrumentalists. “Deacon Blues” was an instant commercial success. Other songs on the album include “Josie” and “Black Cow”. Aja was the fasted selling of Steely Dan’s albums and was Number 3 on the US Album Chart for 3 weeks. The album is named for a high school friend of Fagen’s that married a Korean woman. It was the first tour that Steely Dan hired a manager.