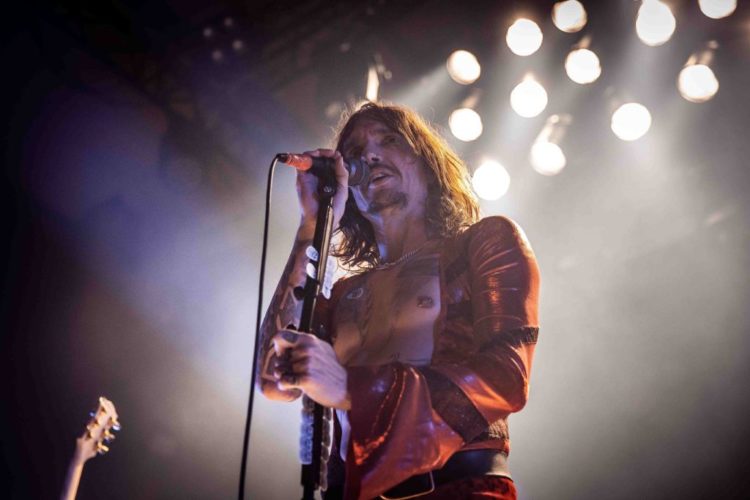 Glam metal may have died with the 1980s, but The Darkness never got the memo. Which, all things considered, is probably a good thing. When they burst onto the scene in 2001 with their massive guitar solos and their catsuits, no one really knew what or who they were, but we loved them anyway. They were fun, they were full-on, and they were, most importantly of all, not nu-metal. 20 years later, they’re older, wiser, and as capable of banging out a massive tune as ever. These are the 20 best The Darkness songs of all time.

Black Shuck, the raucous opening track to the band’s debut album, Permission to Land, is about the legend of a ghostly dog who’s said to terrorize the Norfolk, Essex, and Suffolk coastline. The lyrics tell the tale of the infamous evening Black Shuck burst into a church, laid waste to the congregation, made the church tower collapse, and, as he slunk off, left a trail of scorch marks (or “Devil’s fingerprints”) in his wake. Obviously, none of this actually happened, and Justin Hawkins’ recollection of the myth is at best shaky and at worst completely inaccurate. It’s still a ton of fun though.

According to Return of Rock, Hazel Eyes is based on an old Scottish fishermen’s folksong. With lines like “and the cruel nets had emptied the Northern Sea,” it’s not hard to believe. Taken from the 2005 album One Way Ticket to Hell… and Back, it’s a surprisingly tender, touching song with just enough rock music to keep things rolling.

Justin Hawkins’ long, luxurious mane is his crowning glory, and as integral to his image as his catsuits and falsetto. In Bald, he takes a cheeky swipe at the “slap-headed and hairless” as he connects the dots between hair and virality. Take it seriously and you’ll miss the point. Take it for what it is – a tongue-in-cheek piece of pop mischief- and it’s as fun as anything The Darkness have ever done.

Since the band reunited in 2011, they’ve released several albums that, while good, have never quite managed to top the success of their earlier work. Motorheart, which is set to be released this October, could herald a return to form, especially if its titular track is anything to go by. A punchy love song to a robot (yes, really) with some fabulously witty lyrics, it opens with a distorted, Eastern-inspired guitar before settling comfortably into a retro hair metal groove. Speaking to ultimateclassicrock.com about the song, Hawkins says “Motorheart rocks harder than anything we’ve done before. It makes me happy and proud to crank it up and literally shake my Swiss chalet to its foundations.”

The Darkness were always a band out of time. On One Way Ticket, they sound more like Van Halen on steroids than anything that was around in the early 2000s. But it works. The song was one of their last assaults on the UK Top Ten before they temporarily disbanded following Hawkins’ rehab stint, peaking at No.8 in November 2005.

5. Love Is Only A Feeling

The fifth and final single from the band’s debut album was Love is Only a Feeling. By the time it was released in April 2004, the band were flying high (literally, in Hawkins’ case). They’d collected a clutch of BRIT awards, won an Ivor Novello, and converted a whole new generation to the joys of glam metal. It didn’t last; by the time their second album was released a year later, their fortunes were already on the decline. Still, they still had a few tricks to play before then, and Love is Only a Feeling was one of them. A riff on how love is just another feeling to add to the list, the power ballad took the band to No. 5 in the UK charts.

Released on December 15 2003 in time for the race to the UK Christmas Number One, Christmas Time (Don’t Let the Bells End) was the bookies favorite to top the charts right up until Gary Jules and Michael Andrews’ cover of Tears for Fears’ Mad World overtook it at the last minute. According to Song Facts, the song is about spending Christmas with a loved one who is distant during the rest of the year. “I thought about what it’s like to be emotionally and geographically detached from somebody who was throwing themselves into their work for 51 weeks of the yea,” Hawkins has explained.” And what it’s like to have only a few family days, and how the idea of filling those days with meaningful quality time activities keep you going whilst absent.”

3. Get Your Hands Off My Woman

Despite their fun image, The Darkness have never been the most family-friendly of bands. Get Your Hands Off My Woman manages to drop more curse words in 2:46 minutes than Gordon Ramsay could manage in a day. It’s got sauce, it’s got strut, and it’s got rock and roll. Bliss. Just be sure to play the radio edit if any kids are around.

Growing On Me might have more sexual innuendo than a Carry On film, but contrary to popular belief, it’s not about sexually transmitted diseases, pubic lice, or anything other than “A sweet lady woman that you will never fully fathom or understand, but you love her so much that after a while it doesn’t matter.” At least according to Justin Hawkins, anyway. A big slice of jubilant rock and roll, it peaked at No.11 on the UK Singles Chart. It even managed to wangle a place on the “School of Rock” soundtrack, despite never actually featuring in the film itself.

1. I Believe In A Thing Called Love

In 2020, Classic Rock magazine readers were asked to vote for the best song of the 21st century. They did, and enough of them voted for I Believe in a Thing Called Love for it to be declared the winner. “Of all the brilliant songs that have been released during the last 20 years, I Believe In A Thing Called Love is a rock anthem for the ages,” Classic Rock editor Siân Llewellyn said via Louder Sound. “It is, after all, a bona fide rock classic. A 100%, put-it-on-at-a-wedding-and-everyone-knows-it kinda song, and it’s wholly deserving of its top spot.” Sure, it’s cheesy, and technically, it’s awful. But it’s catchy. Very, very catchy. It’s not going to win you any points for cool, but a guilty pleasure is still a pleasure, and this is most definitely a pleasure.