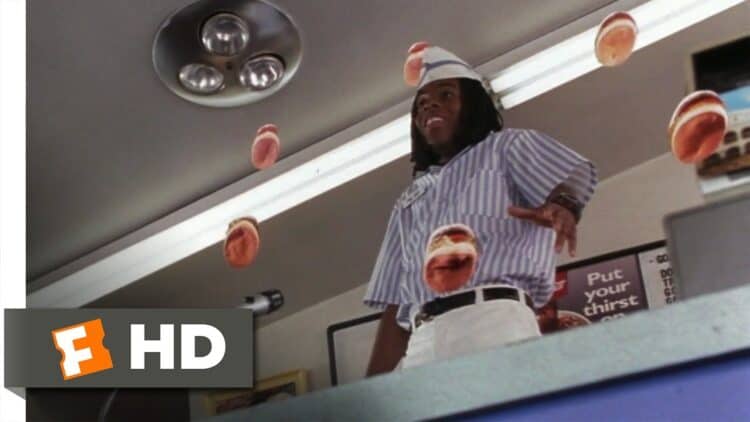 This 1997 release is based on a skit from the Nickelodeon series, All That. The movie chronicles the story of Dexter Reed, a high schooler who starts working in the Good Burger restaurant after an unfortunate accident with one of the teacher’s vehicles. Another co-worker Ed, a more well-to-do student balances out Dexter and together they learn some of life’s most important lessons about hard work. While watching the movie, you’ll see the Good Burger manager, Mr. Bailey. He is the one who not only wrote the screenplay for Good Burger but many other shows on Nickelodeon. At one point there was talk about a sequel where the two characters stumble on an m mystery but it was turned down. Even though it would have been to see, this movie certainly stood alone with many memorable characters. One of the people you will see in the movie is George Clinton who is also one of the voices on the soundtrack. Aside from the track, he is also credited as “Dancing Crazy” in the film. Aside from Clinton, there are many other incredible performances on the soundtrack from a variety of different genres and artists. This is a ranking of all the songs from the Good Burger Soundtrack.

This group only released a single album, Freelance Bubblehead in 1999. Aside from the song Kitty Kat Max on it, (Not The) Greatest Rapper is their most notable hit. Although the song is fun and fits well into the movie, it blended in too much with the other pop fair in the late 90s.

In this song, the pair are with the patients of Demented Hills including Clinton. Once they put this song on they break out into spontaneous dance. However, it is all a ploy for everyone to break free from the facility.

10. We’re All Dudes – Less Than Jake and Kel Mitchell

This song is the theme for the movie and is sung by one of the two lead characters. It’s a fun upbeat song that works well with the overall theme of friendship in the movie.

9. Do Fries Go With That Shake – Trulio Disgracias and De La Soul

Like other songs on this soundtrack, this song has an eclectic funk beat. The song feels like another fun day at work for the pair. The majority of the lyrics are playoff things we might order at a restaurant. In the movie, it plays when Ed is skateboarding.

This version of The Police’s smash hit stays close to the original but adds some funkier grooves. Additionally, you will hear a much heavier dose of electronic instrumentation in this version.

The 90s were just starting to cross into the post-punk music groups like Blink 182. In this song, you hear some of the opening riffs of the neo-punk movement. Throughout the song, several guitar solos place the song squarely alongside other groups in the same genre that came later.

6. I’ll Be There For You – Tracie Spencer

Spencer only released three albums during the height of her career in the 90s. Aside from her albums, she also did several soundtrack songs including this addition to the Good Burger Soundtrack.

Warren G was one of the driving forces behind the rise in West Coast rap during the 90s. He is the stepbrother of Dr. Dre. He has had a longstanding career with numerous hits. His addition to the Good Burger Soundtrack adds another dimension to the fresh fun feel of the movie.

This song was initially on the group’s freshman album, No Doubt; released in 1996. On its initial release, it was the third single on the album. Later, it was used during promotional content for the movie. When listening to it, you will hear a sample of The Jackson 5’s song It’s Great To Be A Hearo.

The song starts with a dreamier hip-hop groove. The song itself feels like a sunny day. According to Okay Player, early in the group’s career, they wanted to focus on a more positive side of rap which is why the group undoubtedly had a spot on this soundtrack.

The song has a beat that immediately makes you sway in your seat. Although this movie won’t go down as being one of the best of the decades, it’s a fun one to watch with a soundtrack that has kept it a memorable hit for almost two decades. When listening, the instrumentation carries confidence. You can almost see the characters going through their day as the song plays.

1. Man – The Presidents of The United States of America

If you grew up in the 90s you probably heard another of this group’s hits, Peaches. Seattle was a hotbed for amazing musical talent and this group was not an exception. The song starts with the group’s signature drum and guitar licks. However, they have a little bit more of a drive than their other songs. The refrain of the song mirrors what it can sometimes feel like to do the same job day in and day out. However, the counter-culture punk feel lends itself perfectly to the younger demographic this movie was trying to reach.