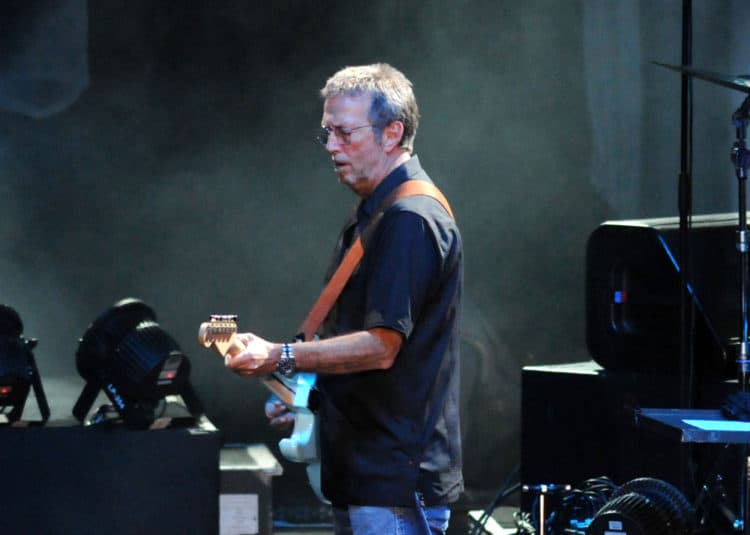 Brad Seiberling directed City of Angels, released in 1998. It’s a poignant tale about a woman who emotionally shuts herself off from life only to meet an angel willing to lose his wing to pursue a love story with her. Meg Ryan and Nicholas Cage play the two main characters. The movie received and won numerous awards, including several of the songs on the soundtrack. Like many movies, it’s the songs that truly brought it to life. Because the subject matter is sad and thought-provoking, each song is perfectly placed to amplify these emotions and allow the viewers to feel the themes. Ranking the songs in this movie is difficult because each captures the scene where they appear. However, some stand out more than others.

This song is a reprieve from another piece in the movie, United. It was the perfect way to end the film since it captures the very essence and the slow ethereal love story.

13. Further Up The Road – Eric Clapton

Clapton recorded several versions of this song during his career, initially recorded in 1957. However, in Clapton’s capable hands, he increases the tempo and makes it his own. During Clapton’s induction into the Rock and Roll Hall of Fame, he performed this song with Robbie Robertson.

Ryan’s character, Dr. Maggie Rice, has a lot of walls up when she meets Cage’s character, an angel named Seth. Lyrics in this song include, “I know there’s nowhere you can hide it. I know the feeling of being alone. I know that you do not feel invited, but come back, come back in from the cold,” reflect her hesitation about letting her guard down.

As with other songs in this movie, some scenes have such an impact that words and lyrics fail, but an instrumental piece captures the scene’s essence. In this song, you feel the lilting possibility of love.

One of the most dramatic scenes in the movie is when Nicholas Cage’s character decides to become human to pursue the woman he loves. As with other Yared pieces, this song captures the scene without making it feel forced or cliche.

There are several different recordings of this song going all the way up to thirteen minutes. However, it’s an abridged version in the movie. During the early days of Jimi Hendrix’s career, he stayed in an apartment with a friend. The walls were painted red, the initial inspiration for this song.

8. Mama You Got A Daughter – John Lee Hooker

J.B. Lenoir initially did this song in 1955. However, Hooker’s voice lends itself perfectly to the lyrics. The song is a bluesy plea to a woman’s mother, hoping the girl he wants will give him a second chance.

In this song, Gabriel tackles grief in its rawest form. He realized he didn’t have any in his catalog that explored this topic when he wrote it. Like many of his other songs, this one brings out emotions that may otherwise be difficult to reveal.

Even though this soundtrack featured many amazing songs from several different decades, the soundtrack rounds them out with instrumental numbers that help round out the selection. One of them is the main title theme. City of Angels is a movie you can get lost in, and sometimes words fail the poignant thought-provoking theme.

When Cole wrote it, she felt that there weren’t many songs written about women having these feelings. There is a lot of hesitation in the song, which reflects the movie’s theme and how Ryan’s character questions her feelings.

Morrissette released her powerhouse debut album, Jagged Little Pill, in 1995. However, two years later, she switched veins with this song. It’s one of the singles from the soundtrack and reflects how you can find the best relationships when you aren’t looking.

The inspiration for this song is Smashing Pumpkins keyboardist Jonathan Melvoin who died of a heroin overdose in 1996. Aside from its cameo in the movie, listeners will catch it in many different commercials, including some for the ASPCA, one of McLachlan’s favorite charities. Even though the lyrics evoke a specific scene, the song’s overall meaning translates to many different moments in life.

According to Songfacts, in the book U2 by U2, Bono said, “It’s a song of quiet anger at the way the world is and God’s failure to intervene.” Additionally, the song’s message is about how much chaos there is in the world and how people are hesitant to let a spiritual power into their lives. In the movie, this is the song playing when Cage discusses losing his wings so that he can pursue his love with Meg Ryan’s character.

Lead singer Johnny Reznik was going through many personal problems when he got the chance to write this song. At the time, he’d just split from his wife and was living in a hotel. Even though he wasn’t crazy about the movie, he agreed to write the song for it. He decided to write the song because he wanted to be on the same album with some of the top names in the industry. It’s a good thing he did write it; Iris went on to be one of the most iconic songs of the 90s and was a perfect addition to the movie.