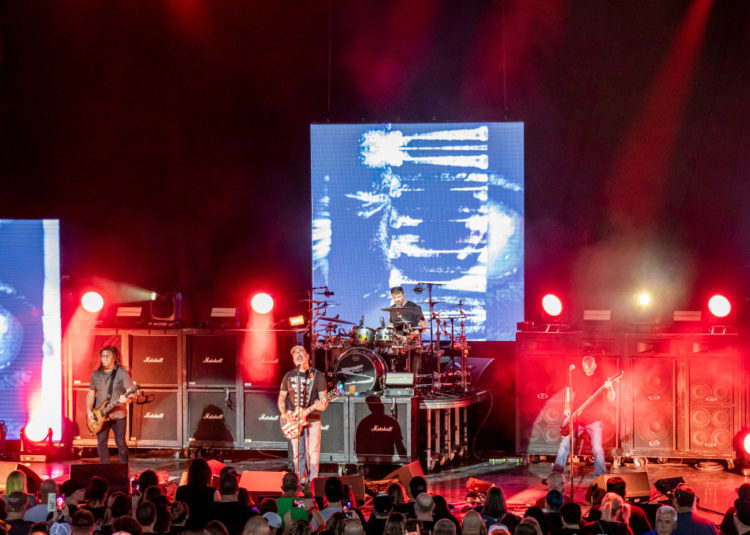 Staind are a rock band from Springfield, MA. They came into existence in 1995. After which, Staind were active from the mid 1990s to the early 2010s. Since then, the band have reunited from time to time, though for the most part, they have been focused on other things. As such, the chances of there being an eighth studio album aren’t looking particularly high. Still, Staind have managed to release a number of hits in the United States, which is much further than most bands ever reach.

Tormented was Staind’s debut studio album. To be exact, they released it on their own, with the result that they sold it through their shows as well as their website. As such, Tormented never got a lot of sales, though it was received well enough by a lot of those who heard it. Content-wise, the release was supposed to be a concept album about someone with a very bad case of depression. Something that reflected vocalist Aaron Lewis’s own experiences. Thanks to that, Tormented was one of the heaviest of the band’s releases, thus enabling it to stand out that much more. Still, while it wasn’t a bad release, its status as a first release showed.

6. The Illusion of Progress

In the 2000s, Staind had three consecutive studio albums that managed to reach the number one position on the U.S. Billboard 200, which was a vindication of sorts for the band. However, that streak came to a conclusion with The Illusion of Progress in 2008, as shown by how it reached number three but never number one on the same chart. Besides that, the release was notable for its influences. It was still post-grunge rock, but it was post-grunge rock that had integrated the sound of the blues. There were listeners who loved that but there were also listeners who loathed that.

Staind was the band’s seventh studio album, meaning that it was the band’s last release for the time being as well. Music-wise, it was a return to the band’s heavier sound on their earlier releases. Unfortunately, Staind fell short in a lot of respects, perhaps because its making was said to have been extremely strained. For example, progress was slow, so much so that the band were still less than half-finished when the deadline was looming over them. Meanwhile, vocalist Aaron Lewis was still doing solo performances for the purpose of promoting his solo work, which irritated the other band members. In fact, his relationship with the drummer Jon Wysocki suffered a total breakdown, with the result that the latter left the band a few months before the studio album came out. Thanks to these issues, Staind wasn’t as good as it could have been, which is a real shame because its better moments showed glimpses of a more mature take on the band’s classic sound.

As mentioned earlier, Staind had three consecutive studio albums that managed to reach the number one position on the U.S. Billboard 200 in the 2000s. The third of those three studio albums was Chapter V, which was interesting in that it had a more varied sound than its predecessors. Otherwise, it was enjoyable but not particularly memorable when compared with the best of Staind’s best.

Staind released their debut studio album on their own. One of their creative choices was what one might call a very controversial cover, so much so that four printers refused to print it. On top of that, Staind managed to make a very poor initial impression on Limp Bizkit vocalist Fred Durst, who was so horrified that he tried to remove them from a concert bill because he thought they were theistic Satanists. Fortunately, the band managed to turn that initial impression around thanks to their performance, with the result that Durst signed them before providing them with help making the follow-up Dysfunction. Said release still had a very heavy sound. However, it was also much more melodic in nature. On the whole, Dysfunction wasn’t the most varied studio album ever released, but it provided a solid foundation on which the band would go on to build a very successful career. As such, it earned its position on this list.

This was Staind’s fourth studio album, meaning that it came after Break the Cycle but before Chapter V. It was like its immediate predecessor in that it was very post-grunge. However, 14 Shades of Grey was notable in that it was a clear change of direction for the band by being lighter in nature. Something that would be continued in subsequent releases. As for why that happened, well, suffice to say that the band made it at a very different point in their lives when compared with their earlier releases. To name an example, the song “Zoe Jane” was named for vocalist Aaron Lewis’s daughter, who had been born just a short while before the making of the studio album. Suffice to say that is the kind of thing that tends to bring about a shift of perspective in people. Moreover, the other band members had their own life-changing experiences as well. In any case, while 14 Shades of Grey was lighter, it nonetheless managed to be quite decent on the whole.

If people had to name the Staind studio album, chances are very good that they are going to name Break the Cycle. This is because it was their single best-selling release, as shown by how it sold at least 4 million copies in 2001 before going on to become quintuple platinum in the United States. Moreover, Break the Cycle was the studio album that enabled the band to break into the mainstream, thus enabling it to make that much stronger of an impression on music listeners.