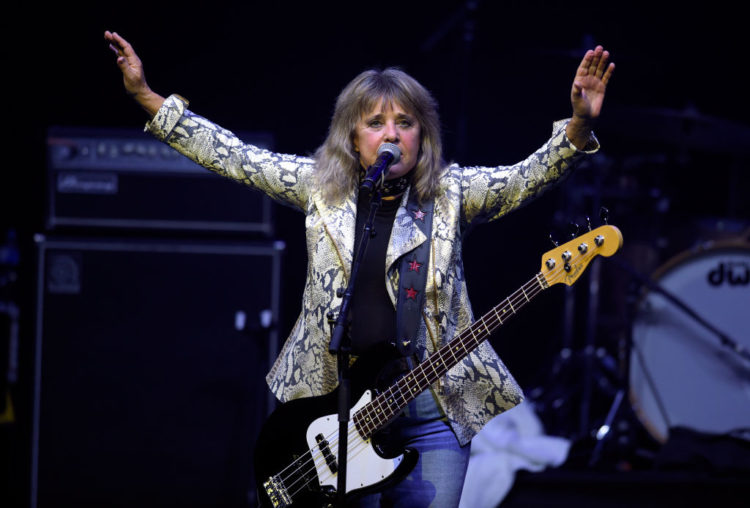 Suzi Quatro needs no introduction. But just in case you’ve been living under a rock for the past 40 years, here’s one anyway. Suzi Quatro is the artist who’s built a career by sticking a middle finger up at convention. She’s the woman who proved that girls could rock just as hard as boys. She’s the hit machine behind over 50 million records sales. She’s the 71-year-old grandmother who can pull off a leather jacket and a jumpsuit better than any 20 year old. In short, she’s a legend. Here are 10 things you might not know about her.

1. She played Leather on Happy Days

Quatro might be best known in Europe for her music, but in the US, it’s her role as Leather Tuscadero on “Happy Days” that people best remember her for. She was offered the part after the show’s producer saw a picture of her on his daughter’s bedroom wall. Up till then, she’d struggled to achieve the same level of fame in her home country (Quatro was born in Detroit, Michigan, but has been living almost exclusively in the UK since the early 1970s) as in Europe. “Happy Days” changed that for good. She was so successful in the role, she was even offered her own spin-off, but she declined out of fear of being typecast.

2. She wants Scarlett Johansson to play her

Back in 2011, Quatro said she’d want Scottish singer KT Tunstall to play her in any theatre show about her life. Since then, she’s apparently had a change of heart. During a recent interview on Today Extra, she spilled the beans on which A list Hollywood star would be the ideal person to play her. “I have a vibe, and don’t ask me to tell you what it is, because I don’t know. All I do know is that I recognize it in somebody else, and whatever this is, you can’t act it,” she explained. ‘And I think what I see in Scarlett Johansson, and I’m going to go out on a limb now, what I feel from her is the same vibe, is that she is sexy without trying to be, and I’ve always had that.’

3. Elvis Presley inspired her to rock

During an interview with The Big Takeover, Quatro revealed why she decided to get into music. As with a lot of people of her generation, the answer lies with The King. “I did see Elvis at five and a half on TV, and I’ll never forget it because it was a pivotal moment,” she said. “I was watching The Ed Sullivan Show, my eldest sister by nine years was screaming. I was looking at her and going, “What’s the matter with you?” And I turned and looked into the TV and I got drawn into it. It ran through my head at that age, “I’m going to do that.” And do it she did.

4. She keeps her ego under lock and key

She’s sold over 50 million records, inspired everyone from Joan Jett to Chrissie Hynde, starred in one of the most popular TV shows of the 1970s, and is widely regarded as one of the most influential female rock stars of all time. Given her accomplishments, she’d be forgiven for letting her ego run away with her from time to time. But she doesn’t. Instead, she keeps it firmly under lock and key in what she calls her ‘Ego Room,’ a room on the third floor of her house that’s filled with her awards, stage clothes, posters, and memorabilia. “When I’m in the mood, I go in and enjoy it, ” she told the Guardian. “Then I come out and shut the door. That’s how I exist in this business.”

5. She’s got an unconventional marriage

Quatro has been married to her second husband, German concert promoter Rainer Haas, since 1993. Yet in all their years together, they’ve never shared the same home. When they first got married, Hass had to stay home to look after his sick mother. The arrangement worked so well, they never saw any reason to change it.

6. Performing is the only high she needs

Quatro came to fame in the mid-1970s, a time of excess, wild parting, and lots and lots of drugs. Not that Quatro ever indulged herself. Speaking to Smashing Interviews Magazine, she explained how the only buzz she’s ever needed comes from standing on stage each night. “I don’t understand people who need drugs or alcohol to get onto a stage,” she said. “I’ve never understood it. Never. If you need to be high before you get on that stage, then you shouldn’t do it.”

After seeing Elvis doing his thing on TV, Quatro’s journey to musical stardom began. After spending years learning classical piano, she convinced her father to buy her a Fender Precision bass guitar in 1964. A year later, she dropped out of school to join her elder sister in the band the Pleasure Seekers. After achieving some minor success with the band, Quatro was talent-spotted by British record producer Mickie Most. She promptly moved to England and started recording as a solo artist. After a few small hits, she was propelled to the big time when her 1973 single, Can the Can, went straight to No 1. From there, the hits started coming in thick and fast. To date, she’s released fifteen studio albums, ten compilation albums, and 1 live album. Altogether, her record sales amount to over 50 million.

Quatro was born in Detroit. Her father was a worker at General Motors. It shouldn’t come as too much of a surprise, then, that she’s got a bit of a thing for cars. Over the years, she’s owned some beauties, including a 1974 Mercedes 280 SL, a 1976 Rolls-Royce Silver Shadow, a 1978 Cadillac Eldorado, a 1993 BMW Z1, and a 2006 Chrysler Crossfire convertible. Her dream car? A 1957 Ford Thunderbird.

9. Her most precious possession is a big red book

In 1999, Quatro featured on “This Is Your Life,” a TV show where each week, a celebrity or public figure would be surprised with a retrospective of their life and career. At the end of the show, the guest celebrity would be handed the famous ‘Big Red Book.’ Quatro keeps her own book safely tucked away in her ego room, but it’s precious enough to rank as the first thing she’d save in a fire.

If she ever decided to retire, Quatro wouldn’t have to worry about surviving on a state pension. Her 47 years in music have come with their rewards, including a very healthy net worth of $20 million.