In this article, I will talk about the phenomenon of the 27 club, a theory about famous artists who lost their lives at the age of 27 at the peak of their careers and gained worldwide fame. The years between 1960 and 1970 were a turbulent period in which artists used music as a means of opposition and social action in the fight against corruption. The four greatest stars of the period died tragically when they were 27 in the two years between 1969 and 1971. A few of these artists are:

You can access the full list of artists who died at the age of 27 and were included in the club from a site called The Forever 27, which was opened in memory of the artists of the 27s Club. What they all have in common is that they gained worldwide recognition for the music they made in their time, died from high doses of drugs, suicide or assassination, and finally, of course, they were 27 years old. At the same time, these artists lived a life in line with the philosophy of “Live fast, die young” as their fans say.

The age factor that led to rumors at first was interpreted as a coincidence, and after Kurt Cobain, the vocalist of the popular star Nirvana band, was found dead in his home at the age of 27, the term 27 Club became a cultural phenomenon. The legendary singer Amy Winehouse, who said in a speech she made with her personal assistant at the age of 25 that she felt she was going to die young but did not want to join the 27 club, was also found dead in 2011 and at the age of 27 in her London apartment due to a high dose of alcohol in her blood.

The death of so many talented musicians and artists at the age of 27 was no longer an eerie coincidence. Accepting the number 27, the common death age of beloved artists, as just a coincidence was not something especially rock music fans wanted to accept. Therefore, over time, the number 27 was given a mystical meaning.

After all these deaths, documentaries were shot and books were written. Many singers in the music world included lyrics in their songs stating that they do not want to join the Club of 27s. Some of the documentaries shot on the Club of 27’s and its members; 27: Gone Too Soon, THE 27 CLUB, Janis: Sad Little Girl and AMY. Books, on the other hand; 27: A History of the 27 Club by Howard Hounes, The Legend & Mythology of the 27 Club by Gene Simmons, and The 27s: The Greatest Myth of Rock & Roll by Eric Segalstad. 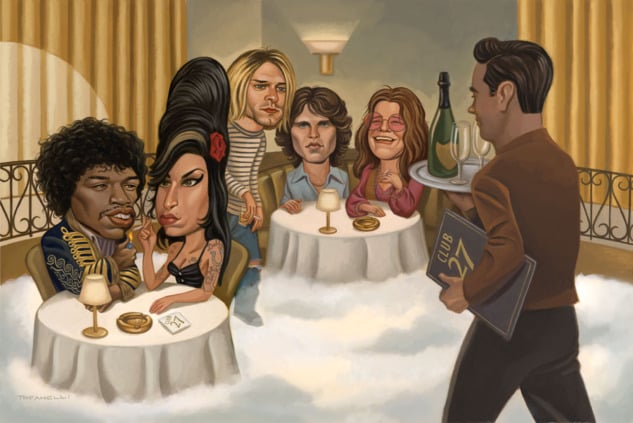 The Scientific Aspect of Theories

Howard Sounes, author of 27: A History of the 27 Club, examines 3,463 musicians who became famous between 1908 and 2012. As a result of Sounes research, these people; It determines that 29 of them died at the age of 25, 30 of them at the age of 26, 50 of them at the age of 27, and 32 of them at the age of 28. He says that age 27 is by far the highest age at which deaths of musicians occur. On the other hand, many people who enter the scientific and statistical research of the work say the exact opposite with the articles they publish. It is stated that the age of 27 is not a more frequent age of death than other ages. For example, Dr. The 27 Club: Running the Numbers, run by Dianna Kenny, claims that the age at which death rates are highest among musicians is 56. The lives of the six main members of the club (Morrison, Joplin, Hendrix, Jones, Cobain and Winehouse) need to be closely scrutinized. Their past family life, their above average intelligence and their groundbreaking in their own times show that they converge at many points apart from death. If we look at it psychologically; The ever-present media and fan interest is an intense type of pressure that most ordinary people have never experienced. This pressure may have led to erratic behavior and the desire to escape reality through the use of alcohol or drugs. 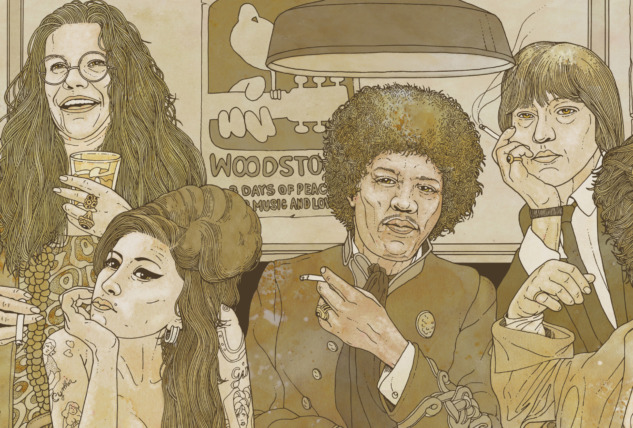 One last thing they have in common is that each of the six people have been trapped at some point in their lives; It was that they felt that their freedom of expression and life had been curtailed. Maybe that’s why they saw their cars, drugs, or alcohol as some sort of escape. If the genius artists who passed away at a young age were alive today, how they would have composed their compositions, we can only imagine now. However, a mental health organization called Over The Bridge, based in Canada, uses artificial intelligence technology to take us beyond our dreams. The company, which observed an increase in mental health and depression symptoms as a result of its research during the pandemic period, explains that the artists of the club of the 27s developed such a project in this period to draw attention to the problems such as depression, panic attacks and mental health disorders. There are 4 songs in the album called Lost Tapes of the 27 Club. Each of these songs is created using an artificial intelligence algorithm with the analysis obtained from the artists’ voices, the compositions and lyrics of their past songs.