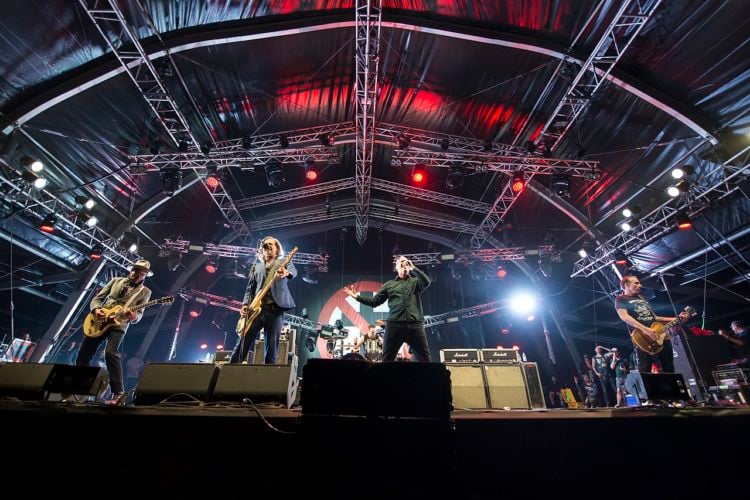 For 40 years Bad Religion has remained one of the most highly beloved bands in the American punk song. With 17 studio albums under their belts, and they aren’t done yet, there are over 200 songs to choose from, which made this list incredibly difficult to put together. But, here are the top 10 best Bad Religion songs of all time.

A slower song from Bad Religion, but that doesn’t mean it is a ballad, it just means it doesn’t have blistering drums and guitars, instead opting for a toned downtempo, but that doesn’t make it any less awesome. Often a go-to song to let the crowd have a breather, while still being a fantastic song. Infected is one of Bad Religion’s most popular songs, with over 16 million listens on Spotify.

No Control is a true representation of 1980’s American punk music, with a fast constant drumbeat and heavy distorted power chords, it embodies everything that listeners love about punk song, which makes this a go-to song to check out in Bad Religion’s back catalogue.

The title track for 1988’s “Suffer” album, the song has become a fan favourite, regularly making an appearance in their live set. Suffer is a fast-paced punk song with catchy hooks and melodies, it makes you want to jump around in a mosh pit and crowd surf, which is exactly what thousands of people do each time the band perform this song.

Sinister Rouge is one of Bad Religion’s darkest songs. The song is best enjoyed by playing the albums opener “Overture” first as it leads directly into the song. According to singer Greg Graffin, Sinister Rouge is was “written about the malevolence of the Inquisition and the religious authorities who wore red robes during the Inquisition. Therefore the rouge I’m speaking of is with us still today, this idea that you can say the wrong thing and you can be punished for your ideas if they go against the traditional or the formal spoken authority in that country. And at that time when we wrote this album of course the formal authority was: you’re either with us or you’re against us. Something that I wholeheartedly am opposed to and I felt strong enough to write this song Sinister Rouge about the Inquisition still being a part of our lives.”

First released in 1990 on the “Against The Grain” album, it was re-recorded for 1994’s “Stranger Than Fiction”, which saw it gain even more popularity. It is currently Bad Religion’s most placed song on Spotify, with over 35 million listens at the time of writing this.

A comeback song of sorts, Los Angeles Is Burning became a fairly big hit for the band in 2004 and has become a fan favourite ever since.

As the title states, this is just a Punk Rock Song in its purest form. Angry and political lyrics, backed up by fast-paced music, it does what it says on the tin and we love it for that reason. The song was written during a darker time in the band’s history after co-founder Brett Gurewitz had left the band to concentrate on his record label, Epitah Records, but this is a stand out track from that period.

You exposed a new generation to the band after the song was included in Tony Hawk’s Pro Skater 2. Bad Religion is often hailed as being one of the key bands in the American punk scene and are nearly universally loved by other bands, with fans including Fat Mike from NOFX, and You is a perfect example of why the band is so highly regarded.

“Like a rock, like a planet, like a fucking atom bomb!”, once you hear this line, whether it’s the album version or the festival version, you know you’re about experience 3-5 minutes of fantastic punk rock. Generator has become a mainstay track in Bad Religion’s live sets and is one of the best modern punk tracks ever released.

American Jesus helped take the band to new heights, becoming a big hit in the genre and one that has remained a key part of any Bad Religion set. The song was the second single that the band released on Atlantic Records, and Eddie Vedder from Pearl Jam provides backing vocals for the track.