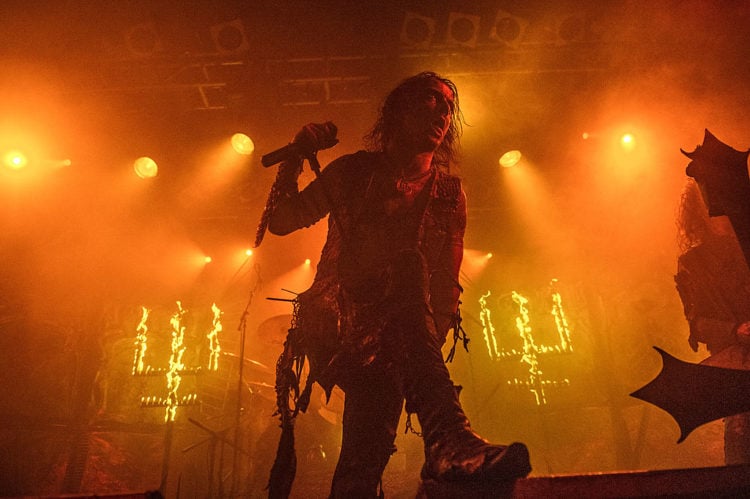 The Swedish rock band known as Watain got its start in Uppsala in 1998. Founding members, Erik Danielsson, Hakan Johnson, and Pelle Forsberg earned their fame through their Theistic Satanic views. Their controversial live shows feature dousing their fans with animal blood, as well as performing satanic rituals honoring the devil that included pyrotechnics, candles, and animal carcasses. According to TMZ, Watain’s 2014 performance in Brooklyn, New York, USA caused some fans in the audience to vomit when they were showered with blood. Still together as core members of the band, Watain has so far released a total of six studio albums, three live albums, as well as a series of demos and extended plays (EPs). The core members of the band remain unchanged, except as of 2015, Hakan Johnsson no longer performs at live venues. Taking his place is Emil Svensson, who is from their fellow Uppsala Death metal band known as Degial.

According to Erik Danielsson, he felt there weren’t enough bands anymore that took things seriously enough to do more than just perform the same kind of music their idols played. Watain’s debut album (Rabid Death’s Curse) was released through End All Life Productions and Drakkar Productions in the year 2000. After the release of their second album (Casus Luciferi), which featured lyrics by Necromorbus (of Funeral Mist), Watain toured Europe with the band Unpure in early 2002. In 2006, Watain did a Hitler salute and wore T-shirts of the National Socialist Black Metal (NSBM)  band Absurd, which lead to accusations that Watain was in full support of the neo-nazi movement, as well as all their white supremacist ideologies. When approached with these accusations, band members were evasive with their answers. Finally, Erik Danielsson commented it was all just a joke, accusing all who take part in the NSBM fail to comprehend the perversions that revolve around black metal music.

Coming from their 2003 album (Casus Luciferi) is what the most devout fans of Watain consider as their cult classic song (Puzzles Of Flesh) of choice.

The song (Outlaw) comes from Watain’s fifth studio album (The Wild Hunt), which was released in 2013. The most common comment shared among fans and music critics regard Outlaw as a powerful, chaotic outburst of raw energy, devoid of any sign of pseudo-artistic influence.

Also from their 2013 album (The Wild Hunt), is the song (They Rode On). Performed as a ballad, it quickly became a cult favourite among most black metal music fans. Critics also pointed out Watain’s performance shows not every piece of black metal music has to thrash just to win over an appreciative audience.

The album (Sworn to the Dark), released in 2007, features (Underneath the Cenotaph) what fans describe as the one song that revs them up each time they hear it. Whether it’s live in concert, played in a club, or at home, fans of Watain’s contribution toward the black metal music scene comment it is the one song that brings them into a frenzy simply by hearing it.

6. Sworn to the Dark

Coming from the album with the same name, 2007’s (Sworn to the Dark) seems to serve as an anthem among black metal fans. This is usually Watain’s song of choice when it comes to starting any of their live shows while on tour. And, judging from how their fans consistently rave about this, it seems to be a good decision.

Considered one of Watain’s finest masterpieces, (Waters of Ain) comes from their 2010 album (Lawless Darkness). The performance coming from the guitarist Pelle Forsberg is most noted, especially during his solo. “Titular waves of water” has been quoted by more than just one Watain fan when describing the aura the guitar in the song gives.

Coming from their 2010 album (Lawless Darkness), Watain’s song (Reaping Death) contributes toward the first of what is four studio albums at this point to get ranked on Sweden’s musical charts. Ranking in at #26, the standout song from their album is most commonly referred to by their fans for its success.

3. Legions of the Black Light

The song (Legions of the Black Light) seems to add even more authority to Watain’s 2007 album (Sworn to the Dark) with its ominous performance. This song also served as a dedication to the late Jon Nortdevit of the band known as Dissection, who committed suicide by a gunshot to his head. When his body was found, it was surrounded by previously lit candles, suggesting the choice to end his own life was associated with his dedication to theistic Satanism.

Watain’s second full-length album (Casus Luciferi), which was released in November 2003, features the song (Devil’s Blood). This song, as well as every other piece written and deformed by the band, is dedicated to their belief system that revolves around theistic Satanism. Erik Danielsson repeatedly makes it clear this brand of devil worship is not to be confused with America’s 1966 brand, one which he considers an ideology not dedicated enough toward this religion of choice.

Among virtually every black metal music list there is, the song (Malfeitor) from the album (Lawless Darkness) is ranked the most often from Watain’s entire discography arsenal. According to This Is My Jam, Malfeitor earns its spot on the top row. With Mozaart  it’s in the top two (along with They Rode On). Malfeitor is listed at #34 in the 100 greatest metal songs of the 21st century on Louder Sound’s Metal Hammer Magazine.