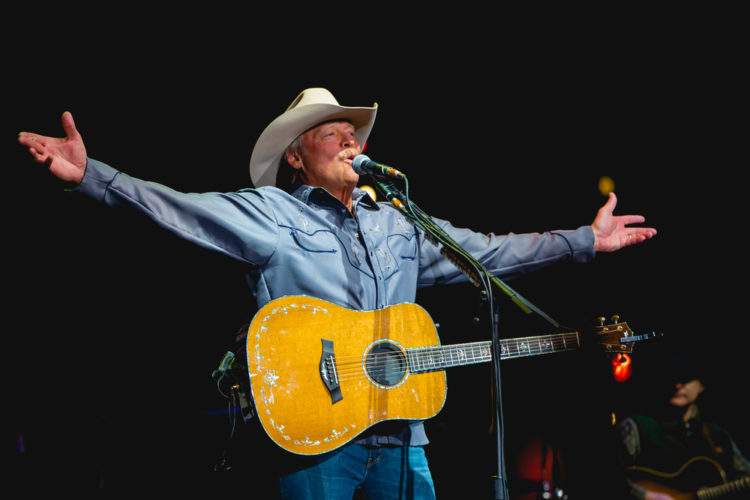 There is little doubt that Alan Jackson is one of the most influential country music artists that has ever existed. He has a career that has literally spanned decades and throughout that time, he has released no less than 18 studio albums, along with several special albums and a few that were recorded live. If you listen to country music in any capacity, you’ve probably heard at least a few of his songs. However, there’s always the chance that you might be completely unfamiliar with his work and you only recognize his name in passing. If you’re curious to know more about the type of music that he is capable of performing, here is a list of all 18 studio albums, ranked from number 18 all the way to number one.

This marks the eighth studio album for the singer and was released on the 26th of October, 1999. It was produced by Keith Stegall and received several nominations, including the Country Music Association award for album of the year. Not surprisingly, it is composed mainly of the country music genre, with many of the songs amounting to covers of other artists’ work. As far as Jackson’s original songs are concerned, the three most popular examples from this album include “Kiss an Angel Good Mornin,” “Farewell Party” and “Pop a Top.”

This was Jackson’s first studio album and it was one that was not met with critical acclaim. As a matter of fact, it was largely met with skepticism. At the time, most people weren’t entirely familiar with Jackson as an artist and this particular album didn’t offer a lot in the way of any real direction for him. As a matter of fact, Alan Jackson purists rarely even consider this worthy of being mentioned in the same breath as any of his other studio albums. As such, it’s easy to forget that it even exists, especially when you consider the fact that it was his first one and that all of the others have easily out performed it, typically on the first day of their release.

As a matter of fact, most people consider this to be Jackson’s actual debut studio album, feeling that the album released in 1987 was more of a trial run than anything else. This particular album was released on the 27th of February, 1990. It is composed entirely of country music and was recorded at both On the Sound Recording and Nightingale Studios, both in Nashville, Tennessee. An astonishing five singles came from this album alone. One is the title song. The other four include “I’d Love You All Over Again,” which became Jackson’s first number one single. To round out the songs, you have “Wanted,” “Chasin That Neon Rainbow” and “Blue Blooded Woman.”

This is the second studio album released on the 14th of May, 1991. It was produced by Keith Stegall and Scott Hendricks and received the Academy of Country Music Award for album of the year. The album was recorded at several different studios, including Recording Arts, 16th Avenue Sound, The Castle, Digital Recorders and Sound Emporium, all located in Nashville. Once again, the album produced five singles, with all of them landing on the country charts.

This album, which was released on the 1st of September, 1998, is Jackson’s seventh studio album. It was released on the Arista Nashville label and once again, was produced by Keith Stegall. Not surprisingly, it is composed entirely of country music. From this album alone, Jackson produced four singles that went on to become hits.

This was Jackson’s third studio album. It was released on the 6th of October, 1992. From the album, five hit singles were produced, with the most notable song being one entitled “Chattahoochee.” This album served as a marked departure from Jackson’s earlier work in the sense that it involved the genres of country, blues and rockabilly as opposed to being a straight country album. It was recorded at a number of different studios in Nashville and in Franklin, Tennessee. It was ultimately nominated for the Country Music Association award for album of the year, which it subsequently won.

This was Jackson’s sixth studio album, released on the Arista Nashville label and produced by Keith Stegall. It was released on the 29th of October, 1996 and ultimately produced no less than six singles that eventually hit the country charts. It was also nominated for the Country Music Association award for album of the year.

This was Jackson’s fifth studio album, released on the 20th of June, 1994 from Arista Records. It was a solid country album and like many of Jackson’s other albums, it was produced by Keith Stegall. Four number one hits came from the album, with the most popular being one called “Summertime Blues.” This album was also nominated for the Country Music Association award for album of the year.

This was Jackson’s ninth studio album, composed entirely of country music, produced by Keith Stegall and released on Arista Nashville’s label. It was released on the 7th of November, 2000 and it produced a number of singles that went on to become hits, including “When Somebody Loves You,” the title track and “Where I Come From.” Like many of Jackson’s other albums, it was nominated by the Country Music Association for album of the year.

This, Jackson’s 14th album, was a bit of a departure from some of the other work he had previously done because it incorporated the genres of adult contemporary music and soft rock. It was released on the 26th of September, 2006 by Arista Nashville, but this time the producer was none other than fellow country artist Alison Krauss. There were two singles produced from the album. One was the title track and the other was called “A Woman’s Love,” which managed to crack the top five on the Hot Country Songs chart.

This was Jackson’s 12th album, released on the 7th of September 2004. In total, four singles were produced from the album. The three most notable ones include “Monday Morning Church,” “If French Fries Were Fat Free,” and “Burnin the Honky Tonks Down.”

This is Jackson’s 10th studio album, composed entirely of country music and released through Arista Nashville’s label on the 15th of January, 2002. This particular album includes the highest debuting single on the Hot Country Songs charts that Jackson ever had, entitled “Where Were You.” It is a song about the terrorist attacks that occurred on the 11th of September, 2001 in the United States.

Released on the 4th of March, 2008 through Arista Nashville and produced by Keith Stegall, this is Jackson’s 15th studio album. Five singles were produced from the album, including the title track. That song went on to become a number one hit, as well as two others from the album, entitled “Country Boy” and “Small Town Southern Man.” The album was eventually nominated for the Country Music Association award for album of the year, something that Jackson has become quite familiar with.

This is the 19th studio album released by Jackson, but it is the first bluegrass album ever released by the artist. It was released on the 24th of September, 2013 and is composed entirely of bluegrass music. A major difference here is that the label that Jackson has become so synonymous with, Arista Nashville, is nowhere to be seen. Instead, Jackson created his own record label and released the album through that label, ACR Records, in conjunction with EMI Nashville. Jackson himself wrote eight of the songs that are featured on the album. Three of the best-performing songs include “Wild and Blue,” “Mary” and “Long Hard Road.” Many country music fans became concerned after Jackson released this particular album, fearing that he was permanently moving into an entirely different genre of music. However, the artist himself has expressed an interest in trying something new and testing his boundaries a bit, while still remaining true to his roots. This statement makes sense, as it isn’t outside the realm of possibility to see country music artists approach different genres. In fact, that has become the standard these days. As such, it isn’t surprising to see that Jackson decided to branch out a little bit and move away from a country album in order to do something different. It’s also worth noting that he has included other genres on some of his albums in the past, so this isn’t necessarily the dramatic departure from country music that some people have made it out to be.

This is Jackson’s 16th studio album released on the 30th of March, 2010. Despite the fact that it was released at the end of March, the album’s first single, entitled “It’s Just That Way,” was released several months earlier, on the 4th of January. Apparently, the album was scheduled to be released several weeks prior to his actual release date, but was pushed back a number of times for unknown reasons. Like many of Jackson’s other albums, it was composed entirely of country music and was released on the Arista Nashville label, produced by Keith Stegall.

Jackson’s 12th studio album was released on the 17th of July, 2015 through Jackson’s own label, ACR Records. It was released in conjunction with EMIi Records Nashville and produced by Keith Stegall. There were 10 tracks on the album, seven of which were written by Jackson himself. Although the album initially received mixed reviews, it was eventually rated at 4 out of 5 stars. Much of that is credited to the songwriting that Jackson himself performed, as well as his ability to tell a story through song that doesn’t sound like the same old thing that’s been regurgitated dozens of times. As such, the album has become something of a fan favorite. There might have been other albums from the artist that performed better as far as the critics were concerned, but fans have grown to feel a real affinity for this particular album and the songs contained therein.

This was Jackson’s 17th studio album, released on the 5th of June, 2012. It’s important because it marks the first album that he ever released on his own label, ACR Records. Like every other album that he has released on his own label, it was a joint venture with another venerable Nashville label, EMI. The album Is comprised entirely of country music. Like so many of Jackson’s other albums, it is produced by Keith Stegall. Three singles were produced from the album, including “You Go Your Way,” “So You Don’t Have to Love Me Anymore” and :Long Way to Go.” The album is longer than most of Jackson’s other examples, with this one being almost an hour in length (52 minutes and 21 seconds, to be exact). Compared to some of his other albums that are scarcely more than 30 minutes in length, this one has considerably more material to peruse than some of his other albums.

This is actually Jackson’s twenty-first album, largely because there were some special holiday albums and one or two live performances mixed in with his regular studio albums. As is the case with the majority of his work, it is composed of country music and produced by Keith Stegall. It was released on the 14th of May, 2021, making it his most recent album as well. It was released through EMI Records Nashville.