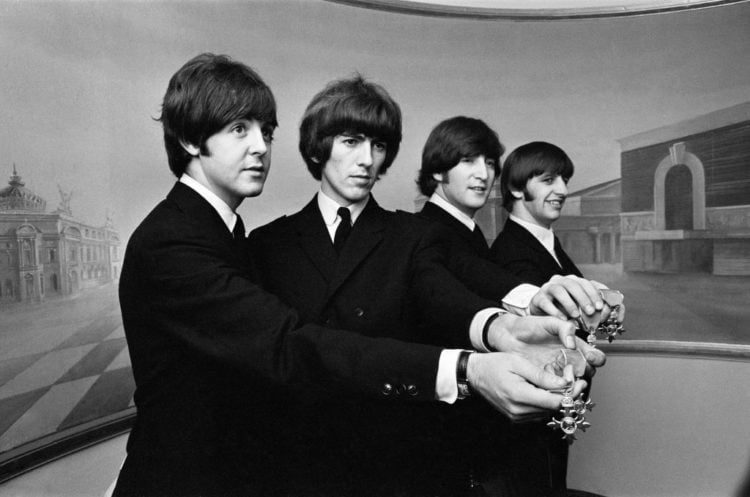 After the release of their first song in 1962, The Beatles and their music has impacted generation after generation and most will admit to knowing at least one of their songs. The English rock band, which comprised Paul McCartney, John Lennon, George Harrison, and Ringo Starr, has had a great impact on music sounds over the years and has influenced many popular bands. For instance, British band Oasis has referenced The Beatles in most of their songs, including, “Don’t Look Back In Anger.” Initially, the band used to play their music in some popular clubs in Liverpool and Hamburg, with Stuart Sutcliffe playing bass before Starr joined them in 1962. With over 600 million records sold worldwide, The Beatles are the best-selling music act of all time. Over the course of their incredible music career, The Beatles scooped many accolades, including seven Grammy Awards, an Academy Award, and fifteen Ivor Novello awards. The band also holds the record for having the most number-one albums in the UK Albums Chart and the most number-one songs on the US Billboard Hot 100. The group was inducted into the Rock-and-roll Hall of Fame in 1988, and they were listed in Time Magazine’s 20th Century’s 100 most important people. The band has recorded many hit songs and even; we found it hard leaving out some songs in our list of 20 of their greatest songs. Here is our list of the 20 best Beatles songs of all time.

The Beatles started writing this song on one evening on 13th April 1966 after they had completed writing George Harrison’s, “Love You To.” The song was recorded over two days and was the final song to be included in their final tour of 1966. The track topped the charts in the UK, US, West Germany, New Zealand, and Ireland and topped the US Billboard Hot 100 for two non-consecutive weeks.

“Golden Slumbers” is one of the last tracks on The Beatles’ 1969 album Abbey Road. The song, which runs for one minute and thirty-one seconds, contains some incredible lyrics that evoke nostalgia, innocence, and loss. “Golden Slumbers” has been used as a soundtrack in emotional moments of many children’s movies including, “Happy Feet,” and “Sing,” which was released in 2016. The main recording of the track happened on 2nd July 1969 and John Lennon was not present since he had been hospitalized after an injury from an accident that had occurred the previous day.

The Beatles’ Money “That’s What I Want” was a befitting ending to their second album, With The Beatles. The song was originally written by Berry Gordy and Janie Bradford of Tamils and was recorded by The Beatles in seven takes. In 2018, Time Out London ranked the song at position 24 on their list of the greatest songs by The Beatles.

This song was broadcasted worldwide after its release in 1967 using the latest satellite system at that time. With over 400 million viewers from 24 countries, the song got a lot of attention from fans all over the world. The message of the song is about love and reminding people that love is everything. According to McCartney, the reason for creating a simple message for the song was to pass a simple yet strong message that could be easily understood by everyone. The song was written by John Lennon, although it was credited to both Lennon and McCartney because of their budding partnership. The song peaked at position one in the US Billboard Hot 100, as well as the music charts for many other countries.

John Lennon wrote this track, although he was assisted by George Harrison. The lyrics of the song were inspired by Peter Fonda’s utterances on a day when he and The Beatles had gone for a trip with The Byrds. Paul McCartney was not part of the song’s recording since he didn’t agree with the song’s musical arrangement and hence he was away from the studio.

“Penny Lane” is a song about a street in Liverpool where Paul McCartney was brought up. In the song, he usually describes the sights and characters that he remembers during his younger days being brought up in the city. The melodies of the song are precious and the lyrics to the chorus are unbelievable. The track was a top-five hit across most European countries, although it became The Beatles’ first song since “Please Please Me” not to reach the top position on the Record Retailer chart.

“Hey Jude” is the longest-running number-one single by The Beatles. In the US, the song spent nine weeks at position one on the Billboard Hot 100, a record it held for nine years. The song sold over 8 million copies worldwide and has often been referred to as one of the greatest songs of all time by music critics. McCartney wrote the song as a dedication to Lennon’s son after John Lennon had left his wife for Yoko Ono, a Japanese artist. The song advises “Jude” to pursue his love opportunities and seek his own happiness. The song was nominated for several Grammy Award categories in 1969 but failed to win any.

Fifteen years after the song was released, John Lennon described it as a remembrance of friends and lovers of our past. He also added that it is a special song to him since he wrote the song based on his own real-life experiences. Every time I listen to this song, I think about every single person who has made a positive impact in my life. Listening to the song would have you thinking that the lyrics were written by an old man, but John Lennon wrote the song when he was only 25 years old.

12. I Saw Her Standing There

This song contains some of the most iconic lines ever. The song which was written by McCartney features incredible lines such as, “She was just 17/if you know what I mean.” The song was targeted to The Beatles fans who were primarily female. “I Saw Her Standing There” is contained in The Beatles album, Please Please Me. The track peaked at position 14 on the Billboard Hot 100 and remained on the charts for 11 weeks.

Any band would kill to have the kind of legacy and mystique that The Beatles had before they called it quits. “Don’t Let Me Down” is a masterpiece that you can never tire of listening to. The song has been hailed by Richie Unterberger of AllMusic as one of the greatest love songs by The Beatles.

John Lennon is a master at turning a somber mood song into a feel-good song. He wrote “Sexy Sadie” during the band’s trip to India, and it was kind of a diss track to Maharishi Mahesh Yogi for his sexual advances on Mia Farrow. Initially, John Lennon wanted the title of the song to be “Maharishi,” though he changed it to “Sexy Sadie” upon a request by George Harrison.

“Get Back’ is the last track from The Beatles’ last album Let It be, which was released in 1970 just before the band split. “Get Back” was also the only track by The Beatles to credit another artist (Billy Preston.) The song peaked at position one in Europe, the US, and New Zealand and was certified platinum twice.

Even in this day and age, it is difficult to find a band that can come up with such an innovative song. If you take a moment and listen to the song, you can hardly believe that it was recorded in 1966. The bass line and the drumbeats in the song just go on to show how The Beatles were ridiculously talented. Although the song was a source of ridicule and confusion amongst many Beatles fans initially, it, later on, became more appreciated for the way it represented the psychedelic experience.

Recently at a concert in Arkansas, Paul McCartney met two women who inspired the track “Blackbird.” The two women were part of a group of nine ladies referred to as “Little Rock Nine” who were discriminated against after enrolling in an all-white high school in 1957.  Paul McCartney wrote the song, and it is amongst the most recorded songs of all time.

Watching a live version of “Ticket To Ride” will make you appreciate the way Ringo smacks his little drums. The track was listed at position 17 on Rolling Stone’s list of The Beatles Greatest Songs of All Time.

Infamous cult leader Charles Manson once ordered a killing spree before claiming that the lyrics to “Helter Skelter” had some prophetic messages to it in its lyrics that inspired his ill motives. The Paul McCartney written lyrics were inspired by The Who’s “I Can See For Miles” which was loud and dirty hence, Paul McCartney was trying to outdo it. The song has been covered by Aerosmith, Oasis, Siouxsie and the Banshees, and many more.

The number four song in our top 20 list of the greatest Beatles songs comes from the album Sgt. Pepper’s Lonely Hearts Club Band which was released in 1967 in the UK. The album had some great tunes, and it’s no wonder it was named as the greatest album of all time by Rolling Stone. “She’s Leaving Home,” was inspired by a girl from a rich family who had run away from her home. The story headlined Daily Mail’s 27th February 1967 issue and surprised many, since the girl had everything she needed. The song was ranked position 5 on Time Out London’s list of the best Beatles songs.

“Taxman” was a song to protest the high level of progressive tax that was imposed on the common citizen by the Labor Government. The song was composed by George Harrison with some help from John Lennon. The song received many positive reviews with people being impressed by the political cheek in it that highlighted Britain’s economic woes during that time.

“Yesterday” is The Beatles’ most covered song with over 2,200 cover versions. The classic song which is a masterclass in music production inspired a movie by the same name. McCartney says that he wrote the song in his sleep, and it is a song about a relationship breakup. In the song, McCartney’s love leaves him over something bad that he said. The song peaked at position one on the US Billboard Hot 100 and has been certified gold in the US, UK, and Italy.

Even by their exceptionally high standards, The Beatles song, “A Day In The Life” has to go down as one of their greatest songs ever. Many Beatles fans consider it their greatest recorded achievement. The song is dreamy, creepy, melancholic, and perfect at the same time. John Lennon wrote most of the melody in the song although Paul McCartney did write some parts. “A Day In The Life” is considered one of the most significant songs in the history of popular music.