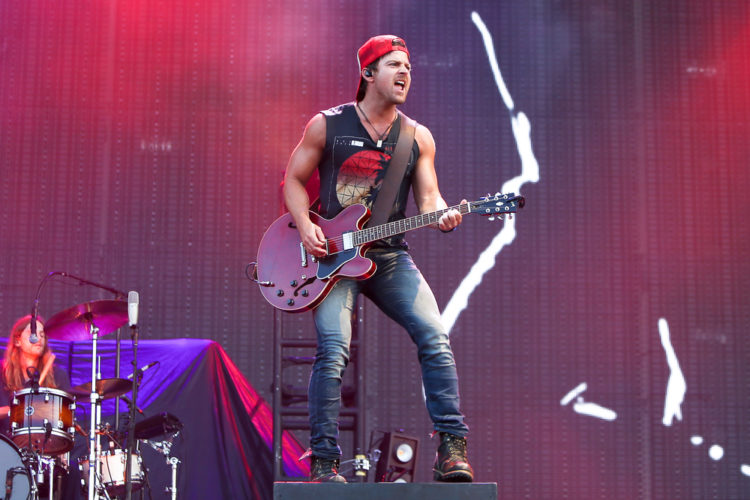 Since launching his career with his debut single, Mary is the Marrying Kind, in 2011, country artist Kip Moore has won millions of fans thanks to his bluesy performances and knack for storytelling. His albums, which include the platinum-selling debut Up All Night, have been greeted warmly by both critics and fans alike, ensuring his standing as one of the hottest properties in country. If you haven’t already jumped on board the bandwagon, here are 10 of the best Kip Moore songs to get you started.

In I’m to Blame, Moore takes a good, long look at his life and holds his hands up to any mistakes he’s made along the way. A beautifully told tale with plenty of tongue-in-cheek humor, it’s easily one of the top tracks from Moore’s second studio album, Wild Ones. Released as a single in February 2015, it peaked at number 24 on the Hot Country Songs chart and even managed to scrape a pass onto the Billboard Hot 100.

Young Love might not have set the charts on fire, and its story might be as old as time, but thanks to Moore’s gorgeously husky vocals and expert storytelling skills, it’s still one of the hottest songs in the singer’s back pages. Credit should also be given to Brett James’ solid production, which ties the whole thing together perfectly.

From a commercial perspective, Dirt Road ranks as one of Moore’s biggest flops, stalling at number 35 on the Billboard Hot Country Songs chart and number 44 on the Billboard Country Airplay. But chart positions are just numbers. Disregard them, and you’ll find a beautifully nuanced vocal performance from Moore that explores his bluesy side along with some first-rate lyrics about booze, moonlight and backseat romance.

7. Mary Was the Marrying Kind

In 2011, the world was introduced to a major new talent with the release of Moore’s debut single, Mary Was the Marrying Kind. Written about a wallflower who went from zero to hero when she started having a bit of confidence in herself, it was a sensational introduction to the singer. If you had to pick a fault, you might say the production is a little heavy-handed, but the vivid lyrics and Moore’s insistent delivery save the day with ease.

Speaking to Sounds Like Nashville Moore explained how he and his songwriting partner Dan Couch came up with Last Shot. “Dan actually came in with that idea and we just kind of danced around that song for probably three hours before we ever could tackle how to get it, where we wanted to go and you get a little bit of that old school Aerosmith vibe from the lyrics to the melodic sense even to the production of it,” he explained. “When I started singing that melody, I was just humming and different stuff, and [David Lee] said, ‘If you were my last breath I’d just want to hold you,’ and I thought that was just such a brilliant line, so then it was just about, ‘Alright, this is a love song, this is an old school country love song right here,’ so that’s what we went with.” A key highlight of Slowheart, the song reached number 6 on the Country Airplay chart on its release in November 2017.

A tender ditty that chronicles the history of a relationship from the first date to parenthood, Hey Pretty Girl, which was written by Moore and his long time songwriting partner, Dan Couch, is a wonderfully intimate song with pared-back arrangements, zero studio trickery, and absolutely nothing to detract from Moore’s spine-tingling performance. A highlight of his debut album Up All Night, it reached number 2 on the Country Airplay chart, number 41 on the Billboard Hot 100, and eventually went gold.

In 2017, Moore scored his third straight top ten hit with the gorgeously vintage-sounding album, Slowheart. At least a little of its success can be credited to its lead single, More Girls Like You, a wonderfully delivered piece of country gold with good-time vibes and a lovely vocal performance from Moore. Released in February 2017, it become Moore’s fourth top-ten single, peaking at number four on the Billboard Country Airplay chart.

Described by Billboard as the most emotionally riveting performance of Moore’s career so far, Running For You finds Moore telling his ex that even though their relationship has run its course, he’s only a call away if she ever needs him. Issued as the second single from the 2015 album Wild Ones, the song was a hit, charting at number 13 on the Billboard Country Airplay chart and number 25 on the Hot Country Songs chart.

Moore’s second single, Somethin’ Bout a Truck, moved the singer into the big league. As tasteofcountry.com says, the lyrics might be a little cliched, but thanks to Moore’s effortless ability to breath life into even the tritest material, it still manages to be wonderfully engaging. Released as the first single from his debut album Up All Night in September 2011, Somethin’ Bout a Truck became Moore’s biggest hit to date, reaching number one on the Billboard Hot Country Songs chart and number 29 on the Billboard Hot 100 – his first (and only) top 40 entry on the chart.

Beer Money might be almost 10 years old, but it’s still as irresistible as ever. A firm fan favorite and a regular fixture at Moore’s live gigs, it’s a big, ebullient stunner, and a superb showcase for Moore’s gift for elevating even the most ordinary material into something joyful. Described by Roughstock as a “strong mood-setting, sing-a-long ready country/rocker,” the song became one of Moore’s biggest hits on its release in July 2012, reaching number one in the Canadian country charts, number 3 on the US Hot Country Songs chart, and even snagging a Grammy nomination for Song of the Year.