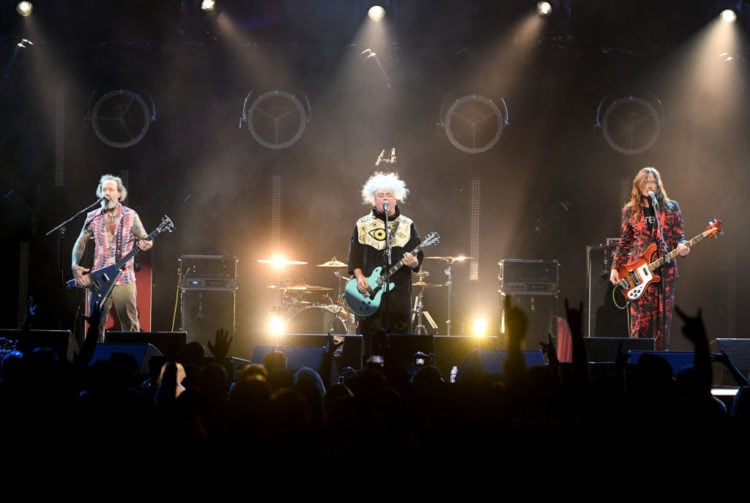 The Melvins were formed in 1983 by Buzz Osborne, Matt Lukin, and Mike Dillard in Montesano, Washington. According to IMDB, the group got their name from a Thriftway store supervisor Osborne disliked. They thought it was a ridiculous name for someone; much like their musical style, the laughability of the word made it perfect for the group, and it stuck. During the group’s early days, they performed Jimi Hendrix and Who covers. However, after Dillard left and was replaced by Dale Crover, the Melvins started to discover its sound. In 1985, C/Z records released a video that documented the Washington music scene. Additionally, they released four songs by the Melvins. A year later, they recorded their first full-length album, Gluey Porch Treatments, released a year later on Alchemy Records. Three years later, Crover and Osborne relocated to SanFranciso. Since Lukin stayed behind in Washigtonton, Lori “Lorax” Black replaced his bass. The Melvins recorded Ozma in May 1989. The group’s next album, Bullhead, departed from their other albums since it featured slower and more drawn-out notes. Over the next several years, the group recorded several albums and went through several lineup changes.

Then, in 1993 they had an unexpected break. Kurt Cobain was a huge fan of Melvins; in fact, he’d auditioned years earlier but was never asked to join because it was rumored he forgot the lines to the songs. Later, it was Osborne who introduced Cobain and Krist Novoselic to Dave Grohl. When Nirvana’s 1993 album Nevermind dropped, Cobain, talked about his early influences mentioning the Melvins, which led to them being signed with Atlantic Records and recording their first major-label release, Houdini debuted at number 29 on the Billboard Heatseekers charts. Lorax left the band because of heroin addiction and was replaced by Mark Dutrom, who produced the 1989 Ozma album. The group released Stoner Witch in 1994. After a brief incident with Atlantic Records, the group recorded one more album with the label, Stag before being dropped by the label in 1997. After Melvin’s brief flirtation with fame, they went back t experimenting and continued to tour. To this day, the group still tours and has done work with major industry players like Dead Kennedys frontman Jello Biafra. Additionally, the original lineup was reunited for Working with God on February 26, 2021. They recently released a 36 song acoustic album named Five Legged Dog, selected from the group’s impressive catalog. These are the 10 best Melvins songs of all time.

The song opens with a gritty guitar riff, followed by a drum sequence that opens the song with force and bravado. Even though the music has a distinct early grunge feel, the vocals have a heavy metal influence. It maintains a propulsive beat throughout the song, making the music behind the vocal the most significant focal point.

The song starts with tight electric guitar riffs and percussion, including the tinny echo of the brass bell. As the song progresses, Osborne’s voice is forceful over a groove of simple drum licks, which are more punctuations. Throughout the music, it remains a steady song with several guitar solos that round it out.

A well-orchestrated drum sequence opens this song, followed by mellow guitar riffs blending together to create a mellower opener. The vocals are low and unhurried, which is undoubtedly something that later influenced groups like Alice in Chains. One of the differences in this song from others is that the guitar solos are brighter.

The song starts with a light whisper of high hat followed by an acoustic guitar riff. This song is much slower than other Melvins songs during the intro. Additionally, as the song progresses, there is a single drum beat that adds a punucation to the song despite being thin. The middle to the end of the song alternates between the beginning’s haunting intro and the instrumentation.

A drum solo opens this song and swiftly finds the grove of the song. Throughout the music, the guitar fades to the back of the piece, becoming a vocal-driven song. Even though the words are pretty much indiscernible, they convey frustration with the backdrop of instruments.

The opening of this song sounds more eighties than early grunge with brighter rhythms and lighter electric guitar. However, Osborne’s voice is far too smokey and gritty to keep the feel, and the song maintains the Melvins’ traditional sound with slight variations in the instrumentation.

When the song opens, it sounds like ominous footsteps. When the drums begin, it creates more urgency. One of the things the Melvins constantly did was an experiment with many different genres of music, never allowing themselves to be pigeon-holed. In this song, the electric guitar riffs are light metal amplified by drum fills that keep the piece from turning into cacophony.

The song opens with a simple drum solo that combines many different elements, including a high hat. When the guitar joins the mix, it’s just a thread of electric guitar riffs. Osborne’s voice powerhouses over the combination. Yet, the song is a brilliant example of the group’s artistry since the variety of stripped down and jarring was just starting to become mainstream.

One of the best things about the group is they helped usher in one of the most influential musical genres. This song is a pitch-perfect example of the group’s genius that helped shaped the Seattle scene. Osborne’s voice has the disenchanted youth with a bit of chaos thrown in. Throughout the song, there are a lot of guitar solos that showcase the artistry of the group. Additionally, many of the drum riffs and guitar licks appeared in later groups like Nirvana.

Speed Metal guitars and drums open this song crescendoing into a solo before the lyrics start. Afterward, it tapers down to a driving rhythm before the vocals start. The music maintains a metal edge throughout the song, which creates forceful energy. This is the type of music where the group shines. Throughout their carer the Melvins were all about innovation and pushing music to the limits. This song does all of those things.