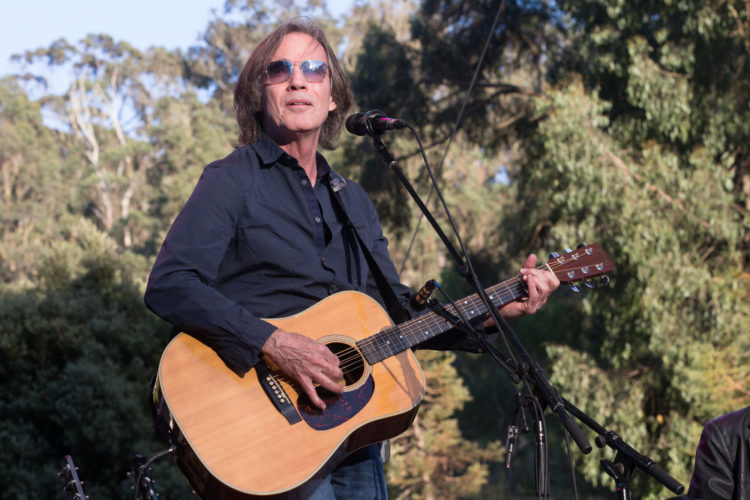 After making a minor name for himself as a songwriter, Jackson Browne finally stepped into the limelight in 1972 with his sublime self-titled album. Throughout the rest of the 1970s, he continued to impress both his fans and the critics with his poignant songwriting and undisputed knack for songcraft. Like many of his peers who rode the wave of the ’70s singer-songwriter movement, he experienced a decline in critical and commercial success in the ’80s, but he weathered the storm to forge a return to form in the following decade. Today, he’s widely regarded as one of the greatest singer-songwriters of all time – and, with over 18 million album sales in the US alone, one of the most successful. Here, we take a look back at his career as we rank all of the Jackson Browne albums from worst to best.

Browne’s sixth studio album was, and remains, the most commercially successful of his career. Released in June 1980, it soared to No. 1 on the Billboard Pop Album chart – his first and only album to make it to the top spot. It also spawned two hit singles, Boulevard and That Girl Could Sing, which reached No. 19 and No. 22 on the Pop Singles Chart respectively. But while it sold by the boatload, it went down like a ton of bricks with the critics. Music journalist Robert Christgau was particularly scathing in his review, writing “Never hep to his jive, I’m less than shocked by the generalized sentimentality disillusioned admirers descry within these hallowed tracks, though the one about the late great Lowell George… is unusually rank.” Although not a complete travesty, the awkward, clumsy songs and listless songwriting make Hold Out Browne’s least essential record.

After venturing into social commentary on Lives in the Balance, Browne got even more political on its follow up, World in Motion. Unfortunately, the result was less successful. For a songwriter as talented as Browne, it speaks volumes about an album when the only really memorable songs are the ones written by someone else. His cover of Steven Van Zandt’s I Am a Patriot is excellent, but the bulk of his own compositions are too muddled and gloomy to warrant repeat listening. The album was as unsuccessful commercially as it was critically, stalling at No. 45 on the Billboard 200 and becoming the first of Browne’s albums not to achieve either gold or platinum status.

Three years after releasing the multi-platinum selling Hold Out, Browne returned with his seventh studio, Lawyers in Love. Like its predecessor, it was a commercial success but a critical failure. Despite reaching No. 8 on the Billboard Pop Album chart and No. 30 on the Billboard 200, it’s a decidedly lackluster affair. The song-craft is as strong as ever, but the material veers towards the sentimental, lacking the originality that made Browne’s earlier albums so compelling.

In 1996, Browne released his eleventh studio album, Looking East. After making something of a comeback with its predecessor, I’m Alive, hopes were running high. Unfortunately, Looking East didn’t quite live up to them. Described by William Ruhlman of All Music as “a highly referential work from an artist who started where most end and has been earnestly seeking the right direction ever since,” it’s an earnest, slightly obtuse album that doesn’t quite live up to its lofty ambitions.

Described by Rolling Stone as “looser, warmer and more live-sounding than Browne’s recent work – yet still as passionately crafted and sung,” Browne’s twelfth studio album, The Naked Ride Home, makes for undeniably pleasant listening. It may lack the depth and originality of his early work, but while the songs may have less impact, the pin-sharp performances and passionate songwriting are as strong as ever. Released in September 2002, it was a moderate chart success, reaching No. 36 on the Billboard 200.

On Where Were You, Browne turns the spotlight on the Bush Administration, deriding the administration’s handling of the Iraq War, Hurricane Katrina, and various other matters. He also manages to find time to reflect on how much life has changed since the ’60s, as well as offer up some thoughts on life, love, and travel. Browne’s previous dabblings in politics had always been more miss than hit, but here, they succeed, at least for the most part. Some of the arrangements are so bland, it’s a wonder they passed muster, but the lovely imagery and wistful melodies of songs like Off Of Wonderland and the titular track keep the album afloat. Released in September 2008, Where Were You peaked at No. 20 on the Billboard 200 – Browne’s first album to reach the top 20 since 1983’s Lawyers in Love.

9. Lives in the Balance

After two commercially successful but lackluster albums, Browne staged a minor return to form on his eighth studio album, Lives in the Balance. It was his most overtly political album to date, and one that Browne felt particularly proud of. “I like this album as much as any I’ve ever done,” he said. “And there’s a certain comfort, a security that I have, talking about something that I feel this strongly about. And whether or not an album succeeds wildly or not, that’s intact.” In fact, it didn’t succeed wildly, although it still managed to reach a respectable No. 23 on the Billboard 200. At the time of its release in 1986, the critical reception was mixed, but time has been kind to the album – while by no means perfect, Browne’s ability to link the personal to the political is admirable, and one that makes it easy enough to overlook the misfires.

After closing out the ’80s with the disappointing World in Motion, Browne kicked off the ’90s with the inarguably superior I’m Alive. Although not a full comeback, the return to the romantic, introspective songs that Browne had abandoned in the ’70s was more than welcome. The songs are, for the most part, exceptionally well-constructed, highlighting Browne’s excellent, although sometimes overlooked, knack for songcraft. The lack of originality is an issue, but compared to the problems that plagued its immediate predecessors, a minor one.

On July 23, 2021, Browne returned with his first album of new material in seven years, Downhill from Everywhere. Despite it being almost half a century since he released his self-titled debut, Browne still sounds fresh, still endlessly curious about the world around him. The title of the album is taken from a remark by the oceanographer Captain Charles Moore, that “the ocean is downhill from everywhere;” as that suggests, environmental issues are very much at the heart of Browne’s songwriting here. Yet despite the right-on message, his skillful songwriting keeps things intimate and personal enough to stop the album from becoming didactic.

6. Standing in the Breach

After six years away from the recording studio, Browne returned in 2014 with his fourteenth studio album, Standing in the Breach. An inspired return to form, it found Browne sounding more vital than he had since the ’70s. The songwriting is intimate, blending the political and the personal to superb effect. Even the covers sound fresh, especially the stunning folk-rock version of Woody Gutherie’s You Know the Night. A critical and commercial success, it gave Browne his highest charting position in years, peaking at No. 15 on the US Billboard 200.

The Pretender was released shortly after the suicide of Browne’s first wife, Phyllis Major, and understandably, the album is shrouded in despair. There’s a couple of missteps (Daddy’s Tune and Linda Paloma should both be avoided), but there’s enough beauty in tracks like Sleeps Dark and Silent Gate and Here Come Those Tears to make it compelling listening. Released in November 1976, it peaked at No. 5 on the Billboard 200 and later went on to earn a Grammy Award nomination. It’s since been certified three times platinum in the US after selling over 3 million copies.

Over a year after releasing his debut, Browne returned to the charts with his sophomore album, For Everyman. This time around, he’d bought some pals along for the ride, with David Crosby, Glenn Frey, Elton John, Don Henley, Joni Mitchell, and Bonnie Raitt all adding a generous dollop of star power. Described by Rolling Stone as “a unique fusion of West Coast casualness and East Coast paranoia, easygoing slang and painstaking precision, child’s-eye romanticizing and adult’s-eye acceptance,” it was an album that almost (but not quite) bettered its impressive predecessor, with astonishingly mature songwriting and perfect songcraft. Standout tracks include These Days, Red Neck Friend, and the especially lovely Ready or Not.

It’s not unusual for bands to sing about touring, but few have taken the theme and run quite so far with it as Browne did on his fifth studio album, Running on Empty, The entire album consists of songs about life on the road, all of which were recorded either live on stage, backstage, on tour buses, or in hotel rooms. Browne sounds more relaxed and at ease than ever before, while the decision to record the album on the fly elevates what could have been a tedious concept album into a deeply engaging, utterly engrossing minor masterpiece. Widely considered to be one of the most commercially accessible albums of his career, Running on Empty was a hit, reaching No. 3 on the Billboard 200 in 1978 and hanging around the chart for an impressive 65 weeks. The following year, it picked up Grammy Award nominations for both Album of the Year and Pop Male Vocal Performance.

By the early 1970s, Jackson Browne was already enjoying some success as a writer. Former Velvet Underground chanteuse Nico had earned a minor hit with These Days (a song Browne had written at the age of just 16) and he’d also written a handful of songs for Nitty Gritty Dirt Band and the Eagles. But his ambitions extended beyond being a songwriter for hire. In a bid to grab a slice of the spotlight for himself, he cut a demo of Jamaica Say You Will and sent it to David Geffen. When Geffen founded his record label Asylum Records in 1971, Browne was one of his first signings. His debut album followed a year later. Described by All Music as “an auspicious debut that doesn’t sound like a debut,” its striking imagery, spare production, and eloquent lyrics resonated with fans and critics alike. The album peaked at No. 53 on the Billboard 200 while its two singles, Doctor, My Eyes, and Rock Me on the Water, charted at No. 8 and No. 48 on the Billboard Hot 100 respectively. It’s since been certified platinum by the RIAA.

Considering Late For The Sky has been selected by the Library of Congress for preservation in the National Recording Registry for its cultural, historic, and aesthetic significance, it shouldn’t come as too much of a surprise to find the album at No. 1. It certainly won’t to anyone who’s listened to it. A remarkably mature, cohesive album, it finds Browne delving deep into themes of love, loss, and identity with more fervor than ever before. His mellow, oracle-style singing style contrasts perfectly with the sharpness of the songwriting without dulling its bite. As Bruce Springsteen said when he inducted Browne into the Rock and Roll Hall of Fame, Late For The Sky is his masterpiece.