Marvel introduced at the San Diego Comic-Con, its post-Avengers: Endgame saga. A total of 10 projects, all to be released in 2020 and 2021.

The first film of the new phase will be Black Widow, Marvel‘s first standalone film for the superhero. Scarlett Johanson will reprise her role as the black widow and is set to be released on May 2020.

Also coming in 2020 is Marvel‘s new addition to the film franchise, The Eternals, starring Richard Madden, Kumail Nanjiani, and Angelina Jolie. It will be coming to theaters Nov. 6, 2020. Director of The Eternals, Chloe Zhao, says she “wanted to make a Marvel movie for so long“, in front of the packed crowd at San Diego Comic-Con, “This film is about a group of immortals but explores what it’s like to be human.” 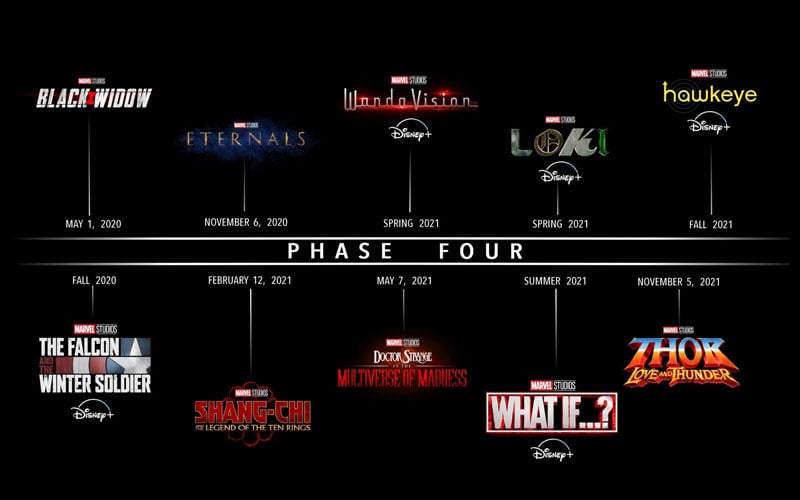 Marvel phase 4: What we know about the upcoming movies

Other standalone films revealed at the comic convention include Shang-Chi, who’ll make his debut in The Legend of the Ten Rings with both Doctor Strange and Thor receiving the sequel treatment in 2021.

5 of the projects announced will be a TV series on Disney’s new streaming service “Disney Plus”. Which includes: Falcon and the Winter Soldier, Wandavision, Loki, What if?, and Hawkeye.

Further sequels for Black Panther, Guardians of the Galaxy, Fantastic Four, and Captain Marvel were also announced, but are yet to be dated. Marvel Studios also revealed that the film, Blade, will be coming to the Marvel Universe. No release date at this time.

I'm Cory Kriens, editor for Chaospin. I grew up in East Tennessee and I'm currently a full-time dad. Every day I like to learn something new or interesting about the world and then write about it. My interests include cinema, science, technology, and a wide variety of music. Feel free to contact me: coryck86@gmail.com