The streaming platform Netflix on Wednesday reported a loss of 126,000 U.S. paid subscribers, missing expectations of a 352,000 gain. Its shares plunged 10.3% Thursday.

Last time Netflix lost subscribers was in 2011 after they raised prices and tried to separate its streaming service from its DVD mailing service, due to customer pushback.

Also, Netflix is blaming its current subscriber loss on its content slate and regional price increases. The company says it doesn’t believe competitive forces were to blame. In addition to that most of the regions that suffered customer loss were where there were price increases. 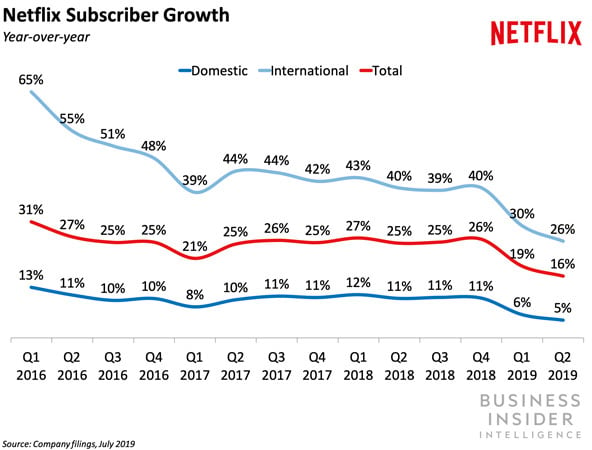 However, Netflix claims they will have a more robust content slate for the third quarter to bring in more subscribers, forecasting revenue of $5.25 billion. The company says its show “Stranger Things” has already had a strong viewership this season. And it anticipates the upcoming new seasons of “The Crown” and “Orange Is the New Black” will be similarly popular.

While the company’s’ loss in the U.S. is rare, missing the international subscribers is more troubling to investors as that is their biggest growth opportunity. Netflix reported additions of 2.8 million global subscribers. This is compared to the estimated 4.8 million, missing their own growth forecast by 2.3 million subscribers.

I'm Cory Kriens, editor for Chaospin. I grew up in East Tennessee and I'm currently a full-time dad. Every day I like to learn something new or interesting about the world and then write about it. My interests include cinema, science, technology, and a wide variety of music. Feel free to contact me: [email protected]