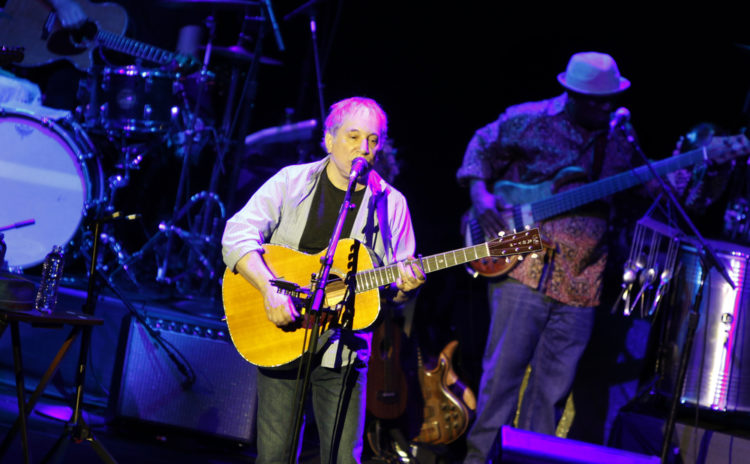 Art Garfunkel may have been the main voice of Simon & Garfunkel, but Paul Simon was the brains. His gift for songwriting, deep understanding of music history, appreciation for different genres, and ability to craft the perfect 3-minute pop song have always left his peers for dust. His solo career may have had its ups and downs, but today, he endures as one of the greatest and most influential singer-songwriters of all time. Here’s how we rank all the Paul Simon albums from worst to best.

14. Songs From The Capeman

Paul Simon doesn’t make terrible albums, but in 1997, he came perilously close with the ill-conceived Songs From The Capeman. It gets points for the joy of hearing Simon swear his way through The Vampires, but otherwise, its clumsy mix of styles and awkward production make it the least essential of all his albums.

After the disaster that was Songs From The Capeman, Simon rebounded in 2000 with You’re The One. It’s a long way from his best, but he’s at least left the weird doo-wop/ salsa mash-up from Songs From The Capeman behind and rediscovered his signature style. Watch out for the lovely Darling Lorraine in particular.

In 2018, Simon released his fourteenth album, In the Blue Light. Consisting of a collection of re-recordings of lesser-known songs from his back catalog, it was only a minor chart success, stalling at No. 70 on the Billboard 200, but the sparse arrangements and dazzling imagery of the lyrics received a favorable reception from critics.

11. Still Crazy After All These Years

As The Guardian writes, Still Crazy After All These Years consists largely of a series of reflections on Simon’s regrets, clashing fervently between hope and dread. He was only 34 at the time, but considering he was just emerging from a divorce, his state of mind is understandable. It veers a little too close to the unremarkable at times, but the wonderfully silly Fifty Ways to Leave Your Lover pulls it back from the brink.

After his solo career started to take a nosedive in the late 70s, Simon started dabbling in films, first appearing in Woody Allen’s “Annie Hall” and later starring in “One Trick Pony,” for which he also wrote the soundtrack. As albumreviews.blog notes, it’s a little sleepy at times, but cuts like Late In The Evening, Ace in the Hole, and Jonah redeem it.

9. So Beautiful or So What

Simon’s tenth studio album, So Beautiful or So What, was greeted warmly on its release in 2011, with some critics hailing it as his best work in decades. It also drew a favorable response from his fans, who took it to No. 4 on the Billboard 200 and the top ten in numerous other countries.

8. The Rhythm of the Saints

The Rhythm of the Saints may share the same African guitars and world rhythms as Graceland, but it’s a less lively offering, with a subdued tone and less arresting songs, Not all of the album’s elements quite come together, resulting in a record that, while typically well crafted, doesn’t quite meet the standards of his very best work.

You’re the One may not have been the greatest album of Simon’s career, but it did at least get him back into the Top 20 on the US Billboard 200 after a decade of chart failures. Six years later, he was back in the charts again, this time with the wonderfully strong, Surprise. Described by The Guardian as “a thrilling return to form,” it was a huge hit, taking Simon to No. 14 on the Billboard 200 (his highest charting position in 16 years) and No. 4 in the UK.

By the time Stranger to Stranger was released in 2016, Simon was pushing 75. But clearly, age hadn’t dented his taste for experimentation even slightly. A lively, innovative album in which Simon beats out rhythms on custom-made instruments and contemplates the value of a very naughty word indeed, it’s an extremely solid offering and one that fully deserved to climb as far up the charts (to No. 3 on the US Billboard 200 and No. 1 on the UK Albums Chart) as it did.

Hearts and Bones was originally conceived as a Simon and Garfunkel album after their successful reunion in 1981. But then the tensions between the duo erupted again and Simon claimed the project as a solo recording after erasing all of Garfunkel’s vocals. Commercially, it was a disaster. Critically, it was another story, with All Music summing up the general consensus by calling it “most personal collection of songs, one of his most ambitious, and one of his best.”

In 1964, Simon & Garfunkel released their debut album. No one noticed. Dejected, Simon packed a bag and slunk off to England. Somewhere in between nursing his wounds and traveling the country, he crafted The Paul Simon Songbook. When he returned to the US to re-partner with Garfunkel, they re-recorded many of the songs together, with Garfunkel’s angelic vocals ironing out some of the rougher edges of the originals. But while the re-recordings may have been smoother, there’s something about hearing songs like I Am a Rock and Kathy’s Song in all their raw, youthful glory that never fails to pull at the heartstrings.

Some people have accused There Goes Rhymin’ Simon of veering too much toward easy listening. They might have a point, but the shiny, biting pop of Kodachrome, the lush arrangements of Something So Right, and the elegance of the protest song American Tune still make it an unmitigated joy.

Compared to the polished grandeur of Simon and Garfunkel’s Bridge Over Troubled Water, Paul Simon’s first album following the duo’s spit is slightly scruffy, very low-key, and deeply personal. It’s also beautiful, with tracks like Mother and Child Reunion giving us an early taste of his future direction in world music.

It really shouldn’t come as a surprise to anyone to find Graceland at the top of our list. Simon’s decision to ignore a UN Boycott and travel to South Africa during apartheid may have caused all kinds of controversy, but no one can deny the scale, ambition, and sheer joy of the result. Since its release, it’s sold around 16 million copies worldwide, becoming not only his most successful album to date, but one of the most influential of all time.