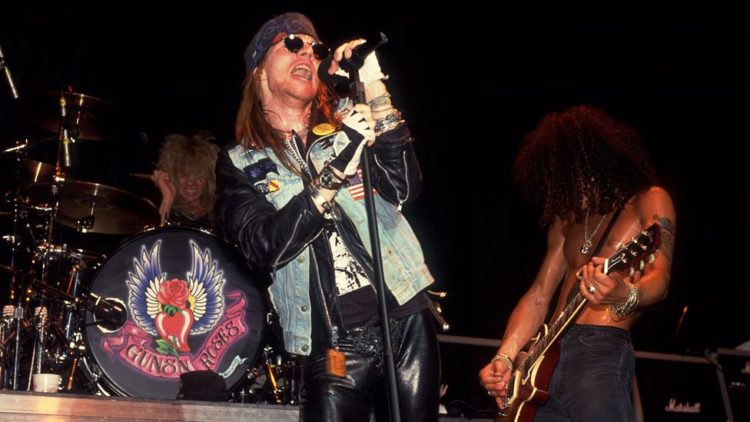 Since 1985, Guns N’ Roses has had a career that’s as rocky as it is successful. With numerous line-up changes, including a 20-year stint in which Axl Rose was the only original member, it is surprising that the band is still going today. But, they are, and they have been regularly selling out arenas and stadiums ever since the early 90s and have showed no sign of slowing down. Here are all of Guns N’ Roses’ albums ranked from worst to best.

Coming in at last place is “The Spaghetti Incident”, Guns N’ Roses’ covers album and the final album the band released before splitting up, leaving Axl Rose as the sole original member of the band for 20 years. Featuring covers of songs from artists including Misfits, The Stooges, T-Rex, Johnny Thunders, and even Charles Manson. It’s not a bad album per se, but when compared to else the band has released over their career, there is no other place for this album than last place.

GN’R Lies was a double EP style release, with the first four tracks being the bands pre-Appetite For Destruction EP titled “Live Like A Suicide”, with the second half being four acoustic songs, including the popular hit Patience. Overall, most of the songs are good, and it even includes a fantastic cover of Aerosmith’s Mama Kin, but Patience is the stand-out track from the album and has become an essential part of any Guns N’ Roses set. Due to the style of the release, it is understandable that some fans might give it a miss, but it is definitely worth checking out, even just to hear Guns N’ Roses pre-Appetite For Destruction.

The most expensive album of all time, and one that took 15 years to make, Chinese Democracy failed to live up to expectations, but that doesn’t mean it is a bad album. The majority of the songs are fantastic and many stand up alongside their earlier music. One issue the album suffers from is that there is a large variety of lineups and musicians present on the album due to the length of time it took to record. This can make the style and overall performances vary greatly and some songs do stick out as not fitting with the rest, but for the most part, it is fine. Songs such as Chinese Democracy, Street Of Dreams, Better, and Madagascar are some of Guns N’ Roses’ best work to date. It has also been said that This I Love is intended to be the next part of the Use Your Illusion trilogy, which includes Don’t Cry, November Rain, and Estranged.

Back in 1991 few bands had the balls to release a double album, never mind one from the hair/glam rock Sunset Strip era. However, Guns N’ Roses aren’t just any old normal band, they are the most dangerous band in the world, and you don’t gain that moniker without taking some risks, and it paid off for them. Use Your Illusion 1 debuted at number 2 in the charts, while Use Your Illusion 2 went straight to number 1, not a bad result for the band. To date, Use Your Illusion 1 has sold over 7 million copies, owing its success to tracks such as Don’t Cry, November Rain, Live And Let Die, and Coma. Use Your Illusion is more rock-based, whereas Use Your Illusion 2 has a softer tone with more ballad style songs, so if you like Appetite For Destruction era GNR, and why wouldn’t you, this album might suit you more than the second album.

Also selling over 7 million copies, Use Your Illusion went straight to number 1 upon its release in September 1991. Featuring tracks such as Estranged, Knockin’ On Heavens Door, and Civil War, for the most part, it is a slower-paced album with many more ballads, so if that is more your thing then you may prefer this album. Use Your Illusion 2 also features the final recording from Steve Adler with the band, as he performs on the opening track Civil War, he was kicked from the band shortly after due to his drug use and failure to get clean.

Finally is Appetite For Destruction, an album that is often hailed as the great debut album of all time. It could also be seen as a near-perfect album, with only one or two songs that could be considered “filler”, although that is entirely up to the listener. The album is full of hard-hitting rock songs from top to bottom, it is gritty and raw, with aggression and anger to it that hits anyone listening to it for the first time. If you want to know why they were nicknamed the most dangerous band in the world, listen to Appetite For Destruction, this is essential listening for any rock fan. To date, Appetite For Destruction has sold over 30 million copies, making it one of the best selling albums of all time, while also being the best selling debut album ever in the US.