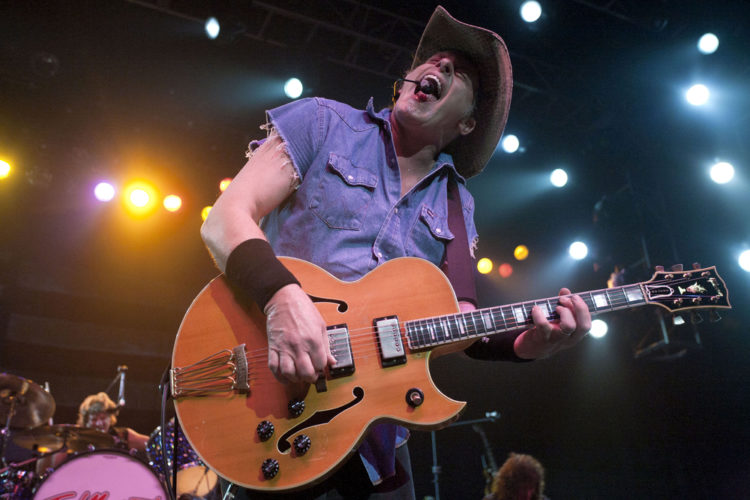 Of all the controversial figures in rock, there can’t be many quite as polarizing as Ted Nugent. The human equivalent of marmite, he’s someone you either love or hate – most of the time for his opinions, but occasionally for his music too. Since the 90s, his legacy as one of the hardest rocking survivors of the 1970s has been somewhat overshadowed by his staunchly conservative politics. But regardless of what you think of his views on gun control or hunting, it’s hard to resist the temptations of a back catalog that includes gems like Cat Scratch Fever and Wango Tango. Here’s how we rank all the Ted Nugent albums from worst to best.

Granted, times have changed, but even in 2007, an album cover depicting a bound, naked woman bent over a platter with a grenade stuffed in her mouth wasn’t a wise move. Fortunately, someone at Eagle Records had the sense to pull the prerelease cover art from Love Grenade and replace it with a slightly less offensive design of a pink ribboned hand grenade before it hit the shelves. Less fortunately, no one thought to do anything about the horrors lurking beneath the cover. As All Music points out, even though Nugent has never been about good taste, you’d think that someone so enamored with their red-state reputation would think twice about writing sleazy sex songs about Girl Scout Cookies or offer to be a Bridge Over Troubled Daughters. If that wasn’t enough, we also get to hear the Motor City Madman self-identify as an aborigine (“I’m an aborigine/You’re an aborigine/We’re an aborigine”), rage against commies in Stand, and deliver yet another rehash of Journey to the Center of Your Mind. Stale, sleazy, and relevant to no one and nothing, it’s Nugent’s least essential record to date.

Nugent’s ninth studio album may have generated the hit single Little Miss Dangerous, but unless you have a taste for bombastic ’80s production, artificial instrumentation, cliched hair metal, offensively inoffensive AOR, and songs that veer from the embarrassingly lame to the diabolically horrific, you’d do well to steer clear. Released in March 1986, it limped to a pitiful number 76 on the Billboard 200.

As Ultimate Classic Rock says, it’s telling that Penetrator’s songs aren’t half as interesting as the members of Nugent’s band for the sessions, who include future Bad Company singer Brian Howe, along with Billy Squier’s rhythm section and keyboardist. But all the outside help in the world couldn’t save what amounts to a bland, boring album that’s too characterless to appeal to fans of either Nugent’s stripped-back ’70s sound or his more bombastic ’80s output. In the album’s defense, some of the songs are actually half-decent, with Tied Up in Love, Knockin’ at Your Door, and Thunder Thighs all having potential. It’s just a pity that every ounce of that potential has been stripped away by the woeful production. Released in February 1984, it reached number 54 on the Billboard 200.

After a decade at the top, Nugent’s crown slipped with State of Shock. Released in May 1970, its electrifying cover convinced enough fans to buy it for it to reach the top 20 on the Billboard 200, but not enough for it to go platinum – his first solo album not to do so. It’s not a terrible album, but it is a patchy one. Paralyzed is a little masterpiece, Snake Charmer and It Don’t Matter are both scorchers, but the rest of the album blunders from one bloozy borer and recycled rocker to the next. One for die-hard fans only.

In November 2018, Nugent dropped his latest album, The Music Made Me Do It. Even for a late-career album, it’s a poor offering. Of the ten tracks, six are re-workings of previously released tracks, suggesting Nuge is either fresh out of ideas or so convinced of the merits of his old songs he doesn’t see the point of coming up with anything better. Which is a shame, as the new tracks – which include the ballsy Bigfundirtygroovenoize and bloozy I Love Ya Too Much Baby – are actually worthy additions to his canon. His guitar playing is as incendiary as ever, but even his most blazing solos can’t compensate for the weakness of his vocals on some of the tracks. If you aren’t already a Nugent fanatic but want to invest some time on latter era Ted, check out 2002’s Craveman instead.

After the horror of Nugent’s ninth album, Little Miss Dangerous, no one was expecting much from his tenth. But while few people outside of Nugent’s band of hardcore followers would suggest If You Can’t Lick ‘Em … Lick ‘Em is a great album (or even a good one), it’s actually a big step up from its direct predecessors, with Nugent’s always impressive guitar playing pushed to the forefront. Unfortunately, the material is thin, the results are inconsistent, and even impressive studio hacks like producer Tom Werman, engineer John Purdell, and drummer Pat Torpey can’t save the album from coming across as a one dimensional, lackluster effort. Released in February 1988, it became his poorest selling album till that point, staggering to number 112 on the Billboard 200.

Nugent, the Motor City Madman’s second self-titled release and his first with Atlantic Records, was intended to be a return to his classic era hard rock. The sober portrait of Nugent on the front cover, together with the return of lead vocalist/guitarist Derek St. Holmes, certainly suggested a return to form, as did his all-star band of Jeff Beck/Rod Stewart drummer Carmine Appice and bass player Dave Kiswiney. But after the promising start of No, No, No, and Bound and Gagged, things start to go downhill fast, jumping from the mediocre (Fightin’ Words) to the shockingly bad (We’re Gonna Rock Tonight). While the production has weathered better than his other albums from the ’80s, it’s far from essential listening. Released in August 1982, it stalled at number 52 on the Billboard 200.

8. Spirit of the Wild

After spending the early 1990s dishing out romantic AOR power ballads with supergroup Damn Yankees, Nugent made a return to the hard rock of his 70’s peak with 1995’s Spirit of the Wild. The result is something of a mixed bag. As sleazeroxx.com says, there are some flashes of the Nugent of old (particularly on the gleefully sleazy Thighracious, the hooky Wrong Side of Town, and the deeply cheesy but hugely fun Lovejacker), but there’s also a ton of filler and some frankly baffling choices like the lamentably lame takedown of the Democratic Party, Kiss My Ass. An album of good intentions, but schizophrenic results.

By the mid-2010s, Nugent was in danger of becoming better known for his controversial politics than his music, making the title of 2014’s Shutup & Jam! incredibly fitting. The content is the usual combo of riff-heavy rock and red, white, and blue sentiment that you’re either a fan of or you’re not. If you’re easily offended (or maybe just have a fondness for decent songwriting), you might want to avoid the likes of I Love My BBQ (“Well the tofu just might kill you, baby/ Tossed salad make you weak/ I like to kill’em and grill’em, mama/ It’s protein that we seek! Somethin’s gonna die!”). If you can weather the weaker tracks, there’s actually a good selection of pickings to enjoy, including the beefy Fear Itself, the hooky title track and the surprisingly nuanced Never Stop Believing. It’s not an album that’s going to convert any nonbelievers to the cause, for if you’ve already bought into Nugent’s brand, it’s a fun listen.

After the multi-platinum success of Cat Scratch Fever, Weekend Warriors felt like something of a letdown. Considering the band changes – the immensely undervalued Derek St. Holmes had left (albeit temporarily), as had founding bassist Rob Grange, who’d departed under a cloud after suggesting that Nugent was putting too much money into building his hunting empire to have anything left to pay the band – the anti-climax was probably to be expected. Still, it’s by no means a travesty. While it may not be in the same league as its predecessor, it offers a decent enough selection of underrated rockers like the enjoyable Need You Bad, Name Your Poison and the title track to keep fans happy.

Listening to 2002’s Craveman, you’d be forgiven for thinking you were listening to some long-lost recording from Nugent’s ’70s heyday. A rawer, harder-rocking album than he’d released in years, it stands in stark contrast to both his synth-heavy, lost in production albums from the ’80s and the romantic, forgettable ballads he’d plied with the short-lived ’90s supergroup Damn Yankees. Fierce, provocative, and more vital than anything anyone could either have expected or hoped for at that stage in his career, it’s by far his best release in decades.

Although the majority of Nugent’s ’80’s output is best reserved for the devoted only, he started the decade on a high note with Scream Dream. It’s not subtle and the songwriting is as much of an acquired taste as ever, but Nugent’s phenomenal guitar playing masks the weaknesses, resulting in a taut, menacing album stuffed with addictive rockers like Flesh & Blood, Don’t Cry (I’ll Be Back Before You Know It Baby), and Terminus Eldorado. The stunningly catchy Wango Tango and propulsive title track easily rank as two of the best songs in his catalog.

A year after delivering his excellent debut, Nugent dished up another serving of the good stuff with Free-For-All. A belt and braces, brazenly ballsy album stuffed with killer songs like Street Rates, Dog Eat Dog, and the sizzling title track, it’s Ted at his loudest and proudest. That said, some of the finest moments come courtesy of an as then-unknown Meatloaf, who was paid the handsome sum of $1000 to contribute his mighty vocals to the likes of Writing on the Wall and Hammerdown – considering the fierce results, we’d say it was money well spent.

Cat Scratch Fever might be best remembered for its title track (a bonafide rock anthem if ever there was one, and the only solo Nugent single to break into the top 30), but there’s not a single dud across the entire album. With able support from the classic lineup of Derek St. Holmes, bassist Rob Grange and drummer Cliff Davies, Nugent delivers one classic track after the next, jumping from the cheeky delights of Wang Dang Sweet Poontang to the wonderfully melodic instrumental Home Bound without missing a beat. Released in May 1977, it became his major breakthrough, charting at number 17 on the US Billboard 200, number 25 in Canada, and number 28 in the UK.

After dropping the Amboy Dukes, Nugent signed with Epic Records and formed a new backing band consisting of Amboy Dukes’ bassist Rob Grange, Derek St. Holmes, and Clifford Davis. Their first effort (and the first album in Nugent’s decade-long career to feature only his name on the cover) was his 1975 eponymous debut. After getting off to a smoking hot start with the 8-minute opener Stranglehood, the album goes from strength to strength, serving up a generous portion of what All Music describes as ” testosterone-heavy, raging, unapologetic rock & roll.” With a tracklist consisting of classics like Motor City Madhouse, Hey Baby, and Just What the Doctor Ordered, it reads like a greatest hits collection. It would take another two albums before he’d make his major breakthrough, but all the signs of greatness were already in full bloom here.