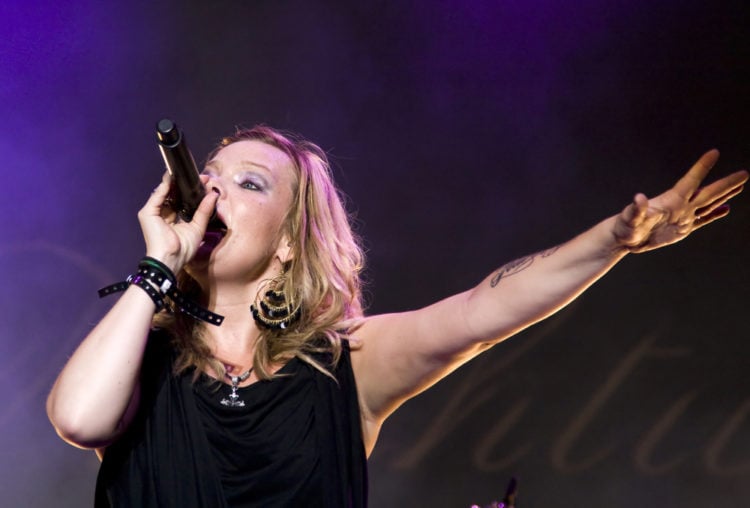 Anette Olzon rose to fame as the singer of the Finnish metal band, Nightwish. Since her acrimonious split from the band in 2012, she’s continued to record music as part of the heavy metal band The Dark Element and as a solo performer. This June, she gave us a taste of what to expect from her second solo offering, “Strong” (due for release in September) with the single “Parasite.” Harder and faster than her previous output, it’s already got the metal world in a lather of anticipation for the album. Find out more about the Swedish singer with these 10 things you didn’t know about Anette Olzon.

1. She’s been singing since childhood

Olzon, who was born in Katrineholm, Sweden on 21 June 1971, was surrounded by music from a young age. She was encouraged by her family to pursue her passion for singing and forced, somewhat reluctantly, to take oboe lessons for eight years. Her mother played in a band, and Olzon got her first exposure to touring when she began performing with them as a teenager. At the age of 17, she joined a cover band named Take Cover. The band was short-lived, but she continued to sing as a session singer and occasional wedding singer, eventually achieving wider recognition thanks to a leading role in the rock opera/musical “Gränsland.”

She may always have had a passion for singing, but Olzon didn’t bank on it as a career. Prior to finding success, she studied psychology and project management. To help make ends meet, she worked as everything from a burger flipper to a veterinarian association, a hairdresser to a factory worker. And she didn’t stop once her singing career took off… take a look at No.9 on our list to find out how she spends her time these days.

If there was one singer in particular that influenced Olzon when she was growing up, it was Celine Dion, who she described as the “ultimate female singer” to blabbermouth.net. Other inspirations include Natalie Cole and metal vocalists Sharon den Adel and Simone S.

In the mid-1990s, Olzon began working as a studio singer for Alyson Avenue. She obviously impressed the band, and they soon invited her to join as the replacement to their leading male vocalist. After recording a four-track demo, they were signed to AOR Heaven. The debut album, “Presence of Mind,” received an overwhelmingly positive reception on its release in 2000, as did their next album, 2004’s “Omega.” After that, the pace started to slacken, leading Olzon to quit the band in 2006 when she heard Nightwish were on the hunt for a new vocalist. The split was amicable; the rest of the band even helped her put together her demo tape for Nightwish. Next time around, the parting wouldn’t be quite so sweet…

5. Her split with Nightwish was bitter

Olzon was officially unveiled as the new lead singer of Nightwish in 2007. Over 2000 singers had auditioned for the position, but the band thought Olzon was the right fit, both in terms of personality and musical style. Five years later, they were singing from a very different hymnsheet. After enjoying years of success together, Nightwish and Olzon went their separate ways in October 2012. At the time, it was said to be a mutual decision. Shortly after, Olzon put forward a very different side of the story, claiming she’d been fired after revealing she was pregnant with her third child. The band denied the allegation, saying in a statement that “[t]he split with Anette wasn’t because of pregnancy or illness. We discovered her personality didn’t fit this work community and was even detrimental to it.”

6. She’s ruled out a Nightwish reunion

It’s been nine years since Olzon and Nightwish went their separate ways, but clearly, time has done nothing to heal the wounds. During a recent interview with Finnish women’s magazine Me Naiset, Olzon lobbied a few more grenades at her former bandmates, alleging they’d not involved her in any decisions and had failed to split revenue equally. Asked whether she could ever see a time when the band would put their differences aside and come back together, she gave a hard pass: “No. Never. Because I can say it like this: There are things they have to do before that will ever happen, and they have still not yet done that. They treated me so badly that, I’m really sorry, but how it is and how it’s been, I cannot see that happening ever,” she said.

7. She’d love to collaborate with Sting

According to anetteolzonitalia.wordpress.com, Olzon’s dream collaborator is Sting, someone she describes as a “super talented singer with a really good voice.” If that particular dream doesn’t come to pass, she’s got a backup: performing at the Eurovision Song Contest. “I´ve always wanted to sing in the competition. How it would be is hard to say before I know the song but maybe singing in Swedish, a really cool and nice dress and really high heels and of course some fires and cool effects,” she says.

Olzon, who lives in the Swedish city of Helsingborg with her husband of eight years, former Pain bassist Johan Husgafvel, is a mom to three kids: 20-year-old Seth from her first marriage, and 11-year-old Nemo and 8-year-old Mio from her relationship with Husgafvel.

9. She’s got a surprising day job

She might be as busy as ever in the studio, but that hasn’t stopped Olzon from taking on a full-time job. During an interview with metalcastle.net, she made the surprising revelation that she’s now working as a full-time nurse. “I do have a regular job, actually – I’m working as a nurse,” she said. “It was, like, working full-time Monday through Friday, then entering the studio and recording. It was a bit busy and I was quite happy I got some vacation in the summertime.”

In 2015, Olzon competed alongside a number of Finnish artists on the second season of the hugely popular Finnish competition show, Tähdet. During the show, each artist performs a selection of covers from various genres, with one singer being voted out each week by the public. Olzon, who was the only non-Finnish singer to feature, made it to week 5 before being eliminated.