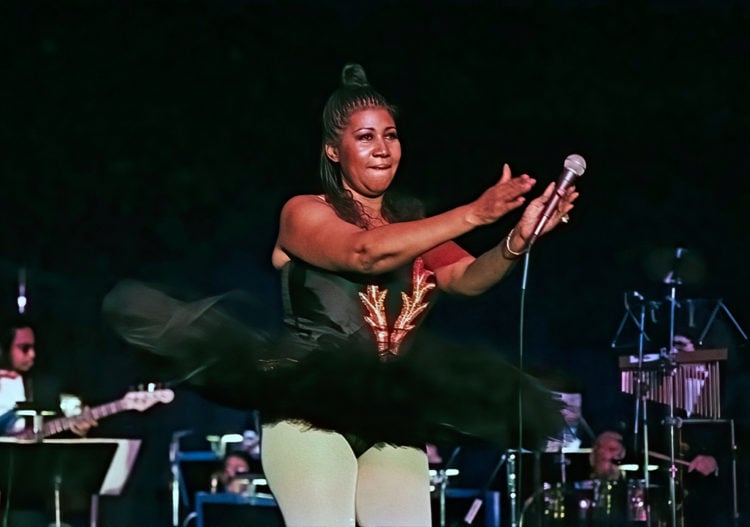 Aretha Franklin began her career as a child, singing gospel at the same church in Detroit, Michigan, where her father was a minister. By the time she turned 18, she’d landed a record deal with Columbia. She wasn’t an overnight success, but after changing labels to Atlantic in 1966, her fortunes changed. The release of a chan of hit singles such as I Never Loved a Man (The Way I Love You), Respect, (You Make Me Feel Like) A Natural Woman, Chain of Fools, Think and I Say a Little Prayer bought both critical and commercial acclaim. Over the next decade, she consolidated her status as the Queen of Soul with one hit record after the next. By the time of her death in 2018, she’d sold over 75 million records worldwide, making her one of the best-selling artists of all time. Here’s our pick of the ten best Aretha Franklin albums, ranked.

As All Music says, in the five years that separated So Damn Happy and her previous album, A Rose is Still A Rose, Franklin made the celebrity gossip pages more than she did the radio. But after sidestepping her problems with the law, she returned to the studio and proved she still had what it took to make a hit. Consisting of a hugely enjoyable collection of catchy, accessible songs, the album’s glorious mix of 70s soul and contemporary R&B showed that, nearly 50 years after her debut, Franklin had lost none of her charms.

Hey Now Hey (The Other Side of the Sky) might not be up to the standards of some of its predecessors, but it’s still a deeply intriguing, hugely enjoyable record. Legendary producer Quincy Jones is on hand to add the fairy dust, but as usual, it’s Franklin’s luxurious vocals that steal the show. Key standouts include the Carolyn Franklin-penned ballad Angel (which topped the R&B charts on its release as a single), Master of Eyes (The Deepness of Your Eyes), and the wonderfully jazzy Moody’s Mood for Love. Released in June 1973, the alum peaked at No. 30 on the Billboard 200 and No. 2 on the R&B chart.

Almighty Fire is as much Curtis Mayfield’s baby as it is Franklin’s. As well as composing all of the songs except for the closing track, Mayfield also produced the album, resulting in one of the most cohesive, not to mention strongest, albums of Franklin’s career. By the time of its release in April 1978, the widespread craze for disco had pushed Franklin into a commercial slump. The album wasn’t enough to pull her out of it, but its singles, the title track and More Than Just a Joy, still managed to climb to a respectable No. 12 and No. 51 on the Billboard R&B Singles Chart respectively.

When Aretha Franklin and Curtis Mayfield teamed up, good things happened. Sparkle was no exception. Recorded during Franklin’s mid 70s commercial slump, the album was released as the soundtrack to the film of the same name. The film was a flop. The album, on the other hand, was glorious, restoring the Queen of Soul to her throne and reminding the world of exactly why she’d earned her crown in the first place. At least part of the credit for the album’s success lies with Mayfield, whose lyrics and production complement Franklin’s style perfectly. Key cuts include the titular track and the anthemic Something He Can Feel.

6. Spirit in the Dark

While it didn’t produce as many sizeable hits as its predecessor, This Girl’s In Love With You, Spirit in the Dark is unquestionably essential listening for both dedicated and casual Franklin fans alike. Franklin penned four of the compositions herself (including the dazzling, gospel leaning titular cut) while her sister Carolyn contributed the lovely Pullin’. Highlights from the rest of the album include a gorgeously sympathetic cover of Ben E. King’s Don’t Play That Song, a lovely rendition of Maxine Brown’s Oh, No, Not My Baby, and a daring remake of B.B. King’s The Thrill Is Gone.

5. This Girl’s In Love With You

As thegreatalbums.com notes, after a brief commercial hiccup with the all-covers Soul ’69, Franklin rebounded with her sixteenth studio album, This Girl’s In Love With You. Chief highlights include a cover of Bobby Bland’s Share Your Love with Me, a soulful take on the Beatles’ Let It Be (which at the time, hadn’t even been released by the band themselves), and her original composition, Call Me. The album didn’t get much attention at the time, but it’s a supremely strong, if underrated, album.

Aretha Now might be just 29 minutes long, but it doesn’t waste a single second. A confident, soulful album packed with some of Franklin’s biggest and best hits (not least the enduringly popular Think and the equally wonderful I Say a Little Prayer), it stands not only as one of Franklin’s greatest albums, but as one of the finest records of the 60s. Released in June 1968, it rose to No. 3 on Billboard’s album chart and quickly sold over a million copies in the US alone.

If Amazing Grace, Franklin’s seminal live album recorded at the New Temple Missionary Baptist Church in Los Angeles alongside Reverend James Cleveland and the Southern California Community Choir, was Franklin’s most deeply personal record, Young, Gifted and Black comes a close second. Nina Simone may have written the titular track, but the album is heavy in songs penned by Franklin herself, resulting in an incredibly heartfelt, emotive album that’s as much of a personal statement as it is an artistic one. Released in early 1972, the album peaked at No. 11 on the Billboard 200 and No. 2 on Billboard’s R&B chart. In 2020, it was named as one of Rolling Stone’s 500 Greatest Albums of All Time.

You can’t move for hits on Lady Soul. All the big hitters are all there – You Make Me Feel Like) A Natural Woman, Chain of Fools, Since You’ve Been Gone (Sweet Sweet Baby) – but even the deep cuts sound like they’ve been culled from a greatest hits compilation. As Wikipedia notes, the album became Franklin’s third R&B chart topper, as well as a No. 2 hit on the Billboard 200.

1. I Never Loved A Man The Way I Love You

I Never Loved A Man The Way I Love You is home to Respect. That. for most people, would be enough to justify its inclusion at No. 1 on our list. If you’re not so easily convinced, take the rest of the album for a whirl. By the opening track of side two, you’ll be in no doubt as to its merits. Consisting of 11 tracks of pure soul perfection, this is the album that transformed Franklin from a singer into a legend.