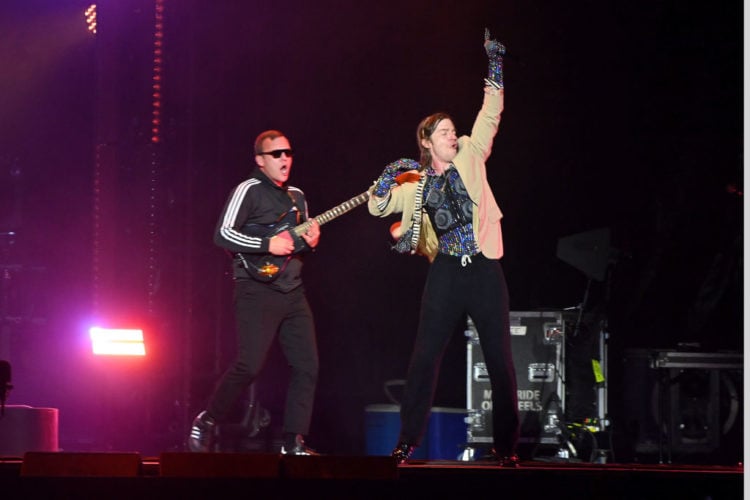 Cage the Elephant formed in Kentucky in 2006. Two years later, they relocated to England just before the release of their eponymous self-titled debut. Thanks to hits like Ain’t No Rest for the Wicked and Shake Me Down, they soon became fixtures on rock radio, something that their subsequent four albums (two of which went gold and won Grammys for Best Rock Album) has done nothing to change. Here, we take a look back at some of their finest moments with our pick of the 10 best Cage the Elephant songs of all time.

According to Song Facts, Trouble was inspired by a conversation frontman Matt Shultz had with a close friend that got him thinking about “honesty and adversity and struggle and stuff like that.” “We were both presenting ourselves as being very honest in the conversation. And I felt there were several places where I was holding back, or kind of curating the idea of what I wanted projected pretty heavily as inside the conversation. So I was curious at what level they were doing the same,” he explained. Released as the second single from the album Tell Me I’m Pretty in April 2016, the song gave the band their 7th number one hit on the US Billboard Alternative Songs Chart and has since certified gold.

Mess Around is about a girl who knows exactly what she wants, and exactly how to get it. As for the upbeat melody, Shultz drew his inspiration from Outkast, explaining “A couple of years ago I saw OutKast doing their festival circuit. Andre 3000’s delivery and his sense of melody was inspiring to me. I was wondering if there was a way to create an alternative song with a similar kind of energy, marrying that with a Byrds or a Creedence Clearwater Revival stylistic color.” Released as the lead single from Tell Me I’m Pretty, it flew to No. 1 on the US Billboard Alternative Songs Chart.

8. Back Against the Wall

In March 2010, Cage the Elephant earned their first-ever number one with Back Against the Wall. Released as the fourth single from the band’s 2008 self-titled debut album, the song went down a storm with the music press, with Clash Music describing it as a “raucous blast of grimy rock ‘n’ roll.” In addition to topping the US Billboard Alternative Songs Chart, the single reached number 12 on the Billboard Rock Songs Chart and number 72 on the Canadian Hot 100.

Watching Matt Shultz dig up the freshly buried corpse of a woman and drag her carcass around parties and restaurants in the video of Around My Head might have made for slightly uncomfortable viewing, but the song itself is a banging slice of alt-rock, with clever guitar work and an infectious chorus. Released on May 4, 2011, as the second single from the band’s second album, Thank You, Happy Birthday, it hit number 27 on the Billboard Alternative Songs Chart and number 36 on the Canadian Rock Chart.

As one reviewer on The Top Tens says, Daniel Tichenor’s bass, Lincoln Parish’s guitar work, and Matt Shultz’s vocals on Aberdeen all blend together to create something masterful, and a definite highlight of the band’s second studio album, Thank You, Happy Birthday. Fun fact: the song was originally titled Maybelline, but when Shultz couldn’t get the city’s name out of his head while the band were rehearsing in Aberdeen in Scotland, they switched it to Aberdeen instead.

In August 2008, Cage the Elephant landed their second number one on the Billboard Alternative Songs Chart with In One Ear. The song was initially released as the second single from the band’s self-titled debut, but it failed to generate much interest the first time around. A few months down the line, the label decided it deserved a second shot and reissued it – considering it went to number 24 on the Canada Rock Chart, number nine in Scotland, and topped the Alternative Songs Chart, it was probably a wise move.

Nakedly honest lyrics combine with mesmerizing melodies, superb refrains, and catchy hooks on the incredibly lovely, emotionally complex Cigarette Daydreams. Issued as the third single from the album Melophobia, it became the band’s second number-one single from the album and their fifth overall when it topped the Billboard Alternative Songs Chart in August 2014.

With its strong, emotionally raw lyrics and haunting melodies, Come a Little Closer ranks as one of the very finest offerings from the band’s third album, Melophobia. Issued as a single in August 2014, it topped the Billboard Alternative Songs Chart to become the band’s fourth number-one hit.

It might have a sing-along-friendly chorus, but like a lot of the band’s best songs, the surface cheer of Shake Me Down conceals a song of surprising depth, with captivating lyrics that veer from the depressing to the optimistic in the space of just a few lines. Released in November 2010 as the first single from Thank You, Happy Birthday, the song became a critical and commercial smash, spending 6 weeks in the top 100 on the UK Singles Charts and sailing to the top of both the Canada Billboard Rock Chart and the US Hot Rock & Alternative Songs Chart. It also became one of the band’s highest entries on the Billboard Hot 100, peaking at number 78.

1. Ain’t No Rest for the Wicked

Ain’t No Rest for the Wicked was the song that put Cage the Elephant on the map. Released as a CD single in June 2008, it became the band’s first top 40 hit in the UK, peaking at number 32. When it was reissued the following year in the US, it proved equally successful, reaching number 6 on the US Hot Rock & Alternative Songs Chart and number 83 on the Billboard Hot 100. Since then, it’s become one of the most enduringly popular songs in their catalog.