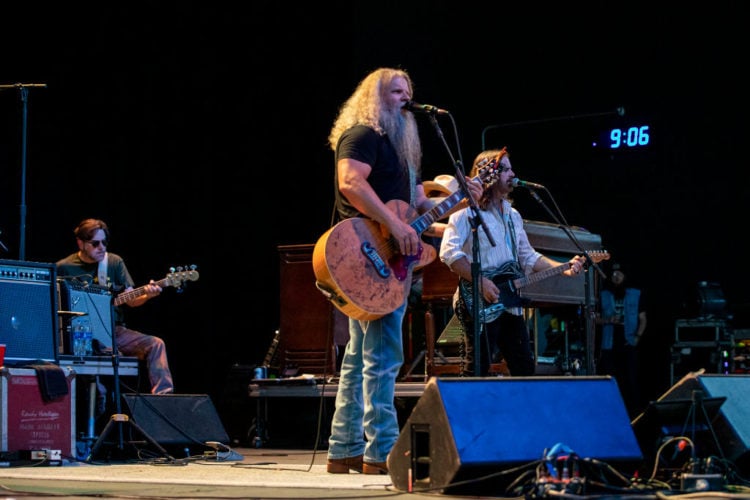 Jamey Johnson is a true country veteran. Although he hasn’t released an album in almost 10 years, he still manages to somehow keep outlaw country—an unfortunately dying breed—alive and kicking amongst mainstream hitters. Johnson’s music is raw and simple in the best sense. It draws so much from familiarity and in some way the warmest parts of the country genre. His discography may be a shorter list compared to many of his peers, but he’s managed to leave a heavy footprint on country music regardless. Here are 10 of Jamey Johnson’s all-time best songs.

We’re starting this list off strong with Redneck Side of Me. Johnson’s gospel influences are heavy when this track first comes on, but that changes quickly enough. Although it comes from one of his earlier albums, this song is probably also one of his most appealing. The mid-tempo build up to the fuller chorus and a mid-song guitar solo makes this one heck of a country rock classic.

Perhaps the best part about this song is that it exemplifies Johnson’s typical approach to his lyrics and how he can easily write about everyday themes with such grace. His voice is deep in this 2010 track, and it’s strong and mellow at the same time. The melody is as catchy as any of his other tunes. Catch the bluesy piano riffs if you can.

8. Between Jennings and Jones

With off drumbeats and slick slides, Between Jennings and Jonesdraws you in with such a rad background instrumental. Johnson’s honky-tonk singing is also worth mentioning here, as he straddles his upper register for majority of the song. It’s exactly the type of song that makes you want to hit that bar between Jennings and Jones, wherever that may be.

Country is known for the stories it tells, and Johnson is a master at that—not only lyrically but melodically too. Oftentimes love is the subject matter of many a country song. It isn’t always easy, but Johnson puts emotion into song so effortlessly that you forget he isn’t singing about you—or is he? Johnson’s vocals tears through this one, heart and soul.

Highly emotional and lyrically touching, this song is one of Jamey Johnson’s most powerful songs. It’s easy to hear why this has become a fan favorite for most. It relates in so many ways to loss and home, and it has often been dedicated to the men and women that have dedicated their lives to service in the military. Lead Me Home is a definite homerun, one that you can count on to lift you up when needed. It could very well be the heavy gospel undertone that Johnson often use, but we believe it’s just the combination of all the right things put into song.

Oftentimes the best artists have stood on the shoulders of the greats before them—that’s why they’re so good. Listening to The Dollar is highly nostalgic of some Willie that you begin to appreciate Johnson’s music in such a different way. This song serves up another side of such a talented artist; it makes us wonder how well-rounded he truly is. He pulls from so many schools of country. Johnson begs to “come spend time” with him in the song, and there’s really no hesitating.

This song’s intro alone is enough to put you in a mood. It’s the kind you listen to with a sipper and the porch lights on. My Way to You is just nice to listen to. There aren’t too many bells and whistles, just Johnson doing his best and singing his heart out. Just wait until you get to the bridge. The emotion is so raw in the vocals and progression; you might end up finding yourself pressing on the replay button before the song even finishes.

We have to admit that part of why this song is so brilliant is the music video. Matthew McConaughey certainly plays the part, but don’t we all in some way? This song has the coolest vibe ever, and it’s really what most hardcore country fans believe country music should sound. One dancing gorilla, a spread of superheroes, and a Pantera shirt-wearing drummer—what more can you ask for apart from Johnson’s awesome musical delivery as always? Brilliant.

There’s a certain finesse to this song that surely must’ve happened with age. Johnson’s voice is wiser on this song. High Cost of Living is the kind of song you listen to on a Saturday morning drive. The Hammond solos in the background just keep coming at you, and the instrumentals stick in your head long after the song is over. It’s reminiscent of a blues cover and a jazz classic—all rolled up into a country bundle. If anyone can do that, it would be Jamey Johnson.

Topping this list of Johnson’s best songs is a crowd favorite. In Color is slow winding and smart and simply Johnson at his best. He’s singing about war and its pains with such intention that you can’t help but feel respect and deep admiration. Once in a while you might come across a song that has so much meaning and purpose—this is that one. It’s an incredible composition and just a great song all around. Johnson would’ve done his job as a musician if he only produced this one song in his career. In Color is the type of song that should be in every playlist. It’s the one that will cause you to stop in your thoughts and your tracks and make you appreciate everything you got.