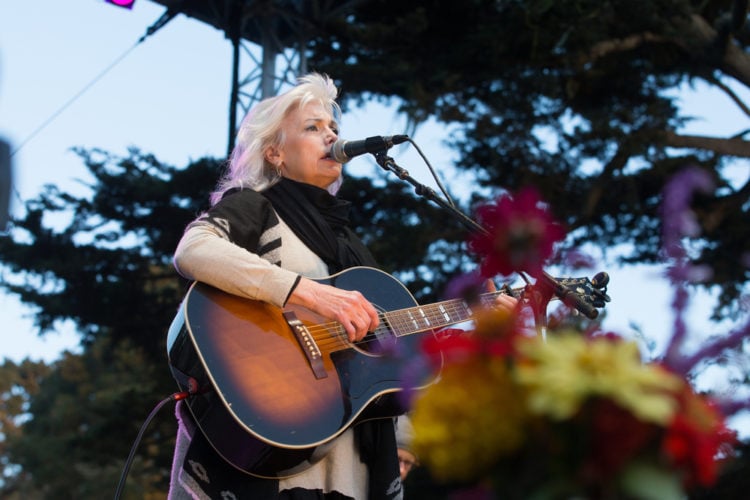 Since gaining her first exposure as Gram Parson’s protégé in the early 1970s, Emmylou Harris has risen through the ranks to become of the living legends of country music. Over a five-decade career, she’s released dozens of albums and chart-topping singles, won 14 Grammys (as well as the Grammy Lifetime Achievement Award), been inducted into the Country Music Hall of Fame, and provided us with some of the most beautiful songs in the country music songbook. Take a moment to savor some of her finest moments with our pick of the 10 best Emmylou Harris songs of all time.

Harris’ wispy, ethereal vocals and talent for mining every ounce of emotion from a song may make her a stunning balladeer, but she’s not averse to letting her hair down on an uptempo number from time to time. In 1984, she teamed up with songwriter (and future husband) Paul Kennerley for the rollicking In My Dreams, an upbeat country tune that showcases her versatility as a performer. Released as the second single from the album White Shoes, it peaked at number 9 on the Billboard Hot Country Singles and Tracks Chart.

According to legend, Robbie Robertson whipped up Evangeline in just a couple of hours the night before The Last Waltz. At the following night’s concert, Harris performed it with Rick Danko, The Band accompanied, and Martin Scorsese captured the whole thing on tape. Over 40 years later, it’s still as spine-tingling as ever. Check out her 1981 performance with Dolly Parton and Linda Ronstadt on the album Evangeline for a very different, but equally goosebump-inducing, version.

As much as she’s a wonderful singer, Harris’ gift for interpretation is what’s always helped set her apart from the competition. Case in point – Together Again, a sublime reading of Buck Owens’ classic country hit from 1964. Her vulnerable, beautifully nuanced cover might lack some of the smoky sultriness of the original (not to mention Tom Brumley’s superb steel guitar solo), but her plaintive delivery turns up the pathos to wonderful effect. Released as a single from the 1975 album Elite Hotel, it soared to the top of the country charts. Four years later, she and Owens’ joined forces to pay tribute to the song’s success on the aptly titled Play Together Again, Again.

Dolly Parton may have a magnificent set of lungs, but as much as she can sing, she can write too. In 1976, she wrote and recorded To Daddy, a heartbreakingly honest account of her mother’s pain at enduring years of her husband’s infidelity and neglect. For whatever reason, her version lay gathering dust for almost two decades; by the time she finally released it in 1995, Harris had already scored a top 5 hit with it and made it one of the most popular songs in her canon.

If you’re going to cover a song that Patsy Cline has already tackled, you either need to be brave, reckless, or Emmylou Harris, who, in 1975, turned this Donald Gibson composition into a number one barnburner. Even Cline would struggle to match her sublime delivery, which is angelic enough to turn Gibson’s ode to failed relationships into one of country music’s sweetest pleasures.

As albumreviews.blog notes, Pancho and Lefty is Townes Van Zandt’s best-known song, something that has almost as much to do with Harris as the Texas Troubadour himself. Delivered over a melancholic pedal steel guitar, Harris’ angelic vocals cut and weave through the tale of two wayward outlaws beautifully, elevating an already memorable song to even greater heights of glory.

Looking on the bright side when you’re sixteen hundred miles from home and all alone after being abandoned by the very person you made the journey for is tricky… unless you’re Emmylou Harris, who’s feeling “all right because it’s midnight / And I got two more bottles of wine.” Written by the reliably excellent Delbert McClinton and featuring a jaunty performance from an unusually carefree sounding Harris, Two More Bottles of Wine made its merry way to the top of the country charts on its release in 1978.

As classicrockhistory.com notes, even George Jones’ biggest fans probably weren’t aware of this underrated gem from his 1968 album, My Country, until self-proclaimed George Jones junkie Harris dug it out, gave it the Emmylou treatment, and sent it, dripping with sadness and infused with melancholia, to the top of the country charts in 1980.

For most of her early career, Harris relied primarily on other songwriters for material. When the muse did occasionally motivate her to put pen to paper, the results made you wonder why she bothered with other writers at all. Inspired by her feelings of loss in the immediate aftermath of the death of Gram Parsons, Boulder to Birmingham is a gorgeously woven, heartbreakingly personal song that, thanks to lyrics like “I would rock my soul in the bosom of Abraham/I would hold my life in his saving grace/I would walk all the way from Boulder to Birmingham/If I thought I could see, I could see your face,” prove that Harris has always been far, far more than just a pretty voice.

As Billboard says, one of the most unlikely hits of Harris’ career is this haunting take on Wayfaring Stranger. A country artist covering a 19th-century spiritual on an album otherwise dedicated to bluegrass (1980’s Roses in the Snow) shouldn’t work, but in Harris’ very capable hands, it worked well enough to become a top ten hit in the US and a number one chart-topper in Canada.