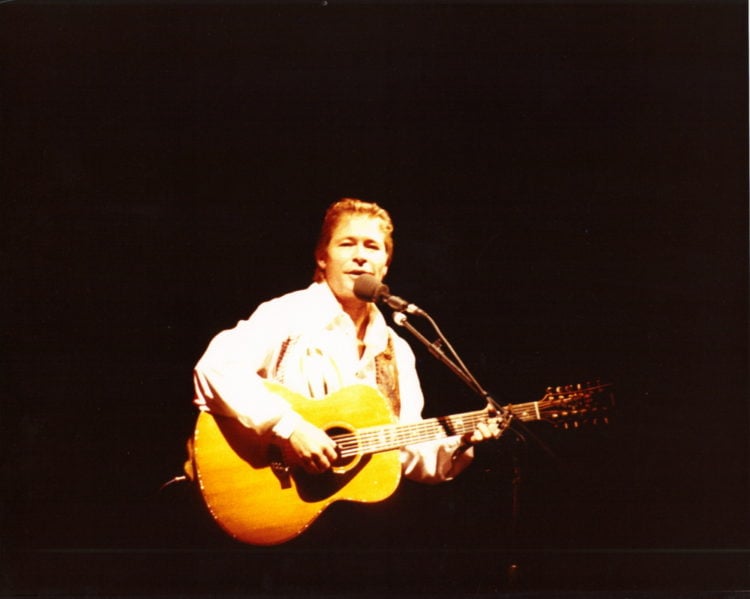 Henry John Deutschedorf Jr., later known as John Denver, was born on December 31, 1943, in Roswell, New Mexico. His grandmother bought him his first guitar when he was a teenager. Denver went to Texas Technical college but dropped out, pursuing a music career in New York City. There, he became part of the Chad Mitchell Trio, a group he performed with until 1968. His song “Leaving on a Jet Plane” was first sung by Peter Paul and Mary but helped catapult Denver to fame. During this time, the record company also asked him to change his name to Denver, an homage to the state he loved and his love and respect for nature as a rock star. Mercury RCA Records singed him in 1969, the same year he released his first single, “Rhymes and Reasons.” Several albums, including “Take Me To Tomorrow,” followed with lukewarm critical reception.

Many people saw him as the “golden boy of folk music,” and soon, he played to sold-out stadiums across the country. In 1977, he made his film debut alongside George Burns in Oh, God! He never made another movie but starred in a few television series, including Walking Thunder and Denver and the Muppets. Denver was also an environmentalist and humanitarian with memberships in the National Space Institute, the Cousteau Society, and the Save the Children Foundation. He also co-founded the Windstar Project, a non-profit wildlife preservation group. Another of Denver’s passions was flying planes. Sadly, he died in a plane crash in 1997. Throughout his career, he recorded many amazing songs. These are the top 10 best John Denver songs of all-time.

On this song, Olivia Newton-John collaborated with John Denver. People are encouraged to live a simpler life by the appealing lyrics. This song, hailed by critics, reached number 13 on the Billboard Hot 100 chart.

Jacques-Yves Cousteau’s ship Calyspos inspired these lyrics. Denver spent time on the boat along with Cousteau and, like him, cared about the ocean. He wrote the song’s chorus on board the ship, but the rest was more difficult for Denver since he wanted to create backing sounds reminiscent of the sea. Ironically, Denver got the idea while skiing. Songfacts says he left the slopes and drove home to take advantage of his sudden inspiration.

Denver’s family moved to Starwood in 1970. At the time, it was an undeveloped piece of land. His mom and dad built an ecologically sustainable house on 8 acres. The song is exceptionally sentimental because Denver loved the area where he lived. After he died in 1997, many fans wanted a museum on the property. Sadly, it was put on the market and sold for 4 million.

Annie Martell became Denver’s wife on June 9, 1967. According to Wide Open Country, the couple had gone through a recent separation but reconciled. The lyrics in this song are grateful that they reunited. Unfortunately, the couple went through a contentious divorce in 1982. Nonetheless, this song carries on and remains one of his greatest hits.

Like this song, many of Denver’s compositions are nostalgic, with lyrics that consistently reminisce about simpler days and times. Even after almost a half-century, they still resonate with listeners because they are soothing and allow people to take a brief respite back to simpler times.

5. Sunshine on My Shoulder

The original inspiration for this song was a rainy day in Minnesota. Denver wanted to be outdoors. As the music evolved, the lyrics also started to be about love. The album “Poems, Prayers, & Promises,” released when Denver was still a struggling musician despite his first hit, “Take Me Home Country Roads.” Two years later, a movie called Sunshine featured this track, making it a huge impact.

Even though one of his most famous songs, “Take Me Home, Country Roads,” was about a state he’d never been to, this song was about Denver’s home state, Colorado. In 1975, the Baltimore Orioles started a tradition, playing this song during the seventh inning. Additionally, Jim Nabors performed it on The Muppet Show in 1976. Billy Dean did a successful cover of the song, reaching number 27 on the country charts in 2004.

3. Leaving On a Jet Plane

According to Outsider, Denver wrote this song while thinking about his childhood and family places since his dad was in the military. Early in his life, leaving so often helped give him a stronger sense of home, a theme that appeared in countless songs. Additionally, when he and his wife were still married, he suffered a lot of separation anxiety every time he left her. Even though he felt like she grounded him and loved her, he frequently overindulged in drugs, alcohol, and extramarital affairs.

Initially, Bill Danoff and Taffy Nivert wrote this song for Johnny Cash. However, Denver loved the music so much he finished writing it, and it became one of the tracks on his 1971 album “Poems, Prayyers & Promises.” Danoff and Nivert chose West Virginia even though they’d never been to the state while driving the back roads in Maryland because West Virginia had fit into the lyrics. Neither has ever been to the state. Denver played this song on December 30, 1970; the crowd gave him a five-minute standing ovation.

While camping with his friends at Williams Lake near Windstar, he witnessed the Perseid Meteor Shower every year. Once he saw all the stars in the sky along the mountain, he began writing this song. Like other songs in his catalog, the initial lines of the song were similar to a bolt of lightning. Nonetheless, the final composition took him almost a year to finish. When Denver testified in a Senate hearing about the Parents Music Resource Center, he cited this song since many radio stations refused to play it because of drug references.