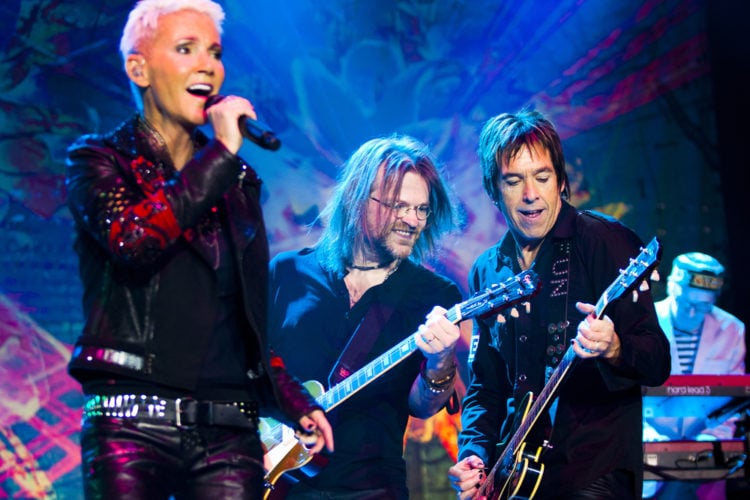 Swedish pop rock duo from 80s Roxette may have performed its last performance in 2019, but their music will certainly live on. Marie Fredriksson and Per Gessle have created an incredible dynasty that’s lasted over three decades. Roxette stood out among their peers in the 80s because of their unique sound, but that sound is also what set them apart throughout the duo’s career. If you’re up for going down the memory lane, here are the 10 best Roxette songs of all-time.

Upon its release, Sleeping in My Car became an immediate success throughout Europe. This song is the perfect platform for Marie Fredriksson’s immaculate thee-octave vocal range. During this time in the early 90s, Roxette was beginning to steer towards the pop punk route, a natural progression for the duo anyway. According to sources, Per Gessle supposedly wrote this song in under an hour. It’s not clear whether the sleepy vibe of the punk pop song is intentional, but it definitely works. Sleeping in My Car became Roxette’s 2nd number one hit in Sweden when it was released in 1994.

Some refer to Fading Like a Flower as the best song on the Joyride album. The piano rock ballad charted on many top ten lists worldwide, the highest being in the US and Canada at number 2 back in 1991. The song was remixed by the Dancing DJs in 2005, and that track charted in various countries as well. In some ways, this song is considered to be Roxette’s last real American hit.

Listening to this song definitely feels like a Joyride on a Sunday afternoon. Joyride is one of Roxette’s few number one hits in the US. According to sources, the title to the song was inspired by a Paul McCartney interview, in which he compared songwriting with John Lennon to a “long joyride.” As the namesake of their third album, Joyride is a great representation of the whole album. The song is fun without being soft, and its sometimes nonsensical lyrics make the song even better.

7. The Centre of the Heart (Is a Suburb to the Brain)

This song spent 4 weeks on the number one spot of the Swedish charts back in 2001. It’s incredible to think that a band formed in the 80s can still make top hits in the 2000s, but that’s the magic of Roxette and their hit-making abilities. The Centre of the Heart is an uptempo electropop track from the band’s 7th studio album and is that album’s lead single. Kudos to the band for still creating music that stayed true to their own even when everyone else is curtailing their sounds under the industry’s pressure.

It’s awesome when Per Gessle takes on the lead like he did on How Do You Do. This song is a prime example of how the duo’s dynamic works and how they were just born to perform together. The 1992 hit song features Fredriksson on the keyboard, which she actually does on majority of the band’s tracks. How Do You Do is the summer song you’ve forgotten about and need to rock to soon.

There are so many things about this song that just way ahead of its time. The drum loop is the most prominent sound on Wish I Could Fly, at least until you hear the orchestra kick in on the forefront. The effect is outerworldly and totally innovative combined with Fredriksson’s vocals. In fact, Fredriksson once said that this particular song holds a special place for her. Wish I Could Fly became the most played song in Europe in 1999.

Back in 1990, no one really knew who Roxette was in the US. Then all of a sudden the band was everywhere and their songs were hits. Dangerous was one of Roxette’s first international hits. It’s catchy and powerful, and the lyrics bear the same signature. Per Gessle supposedly wrote this song just before their first tour in 1987. Could be magic; could be genius.

3. Listen to Your Heart

In the land of power ballads, Roxette sits at the throne overlooking the kingdom. The great intro phrase is something that any music lover should recognize, and Fredriksson’s voice is equally unforgettable here. Her rasp is more dominant as well as her angst. This is easily a favorite song for many true Roxette fans. Lyrically, it’s a beautiful love song. Melodically, it’s remarkable. All in all, Listen to Your Heart is one of Roxette’s best work to this day.

The back and forth between Gessle and Fredriksson on The Look is the most fun in a song that anyone ever had in the 80s. That might’ve been an overstatement, but there’s a reason why this song has been featured in as many shows and commercials as it had. From Baywatch to Clueless and Family Guy, this song has been featured everywhere—enough to say that The Look is a true classic and will never be forgotten.

That scene on Pretty Woman when the limo driver takes Julia Roberts away from the Beverly Wilshire Hotel will forever be engraved in our minds. It’s heartbreak at its tipping point, and of course, it’s this song that sends it all crashing down. It Must’ve Been Love is a once-in-a-lifetime song. Roxette truly outdid themselves on this track, and this remains to be the duo’s most popular song today. It Must’ve Been Love became the main song for the movie, and it also became the song for many broken-hearted people around the world. We love Roxette for all the music they’ve given us and the world. They are done, but it’s certainly not over for us.