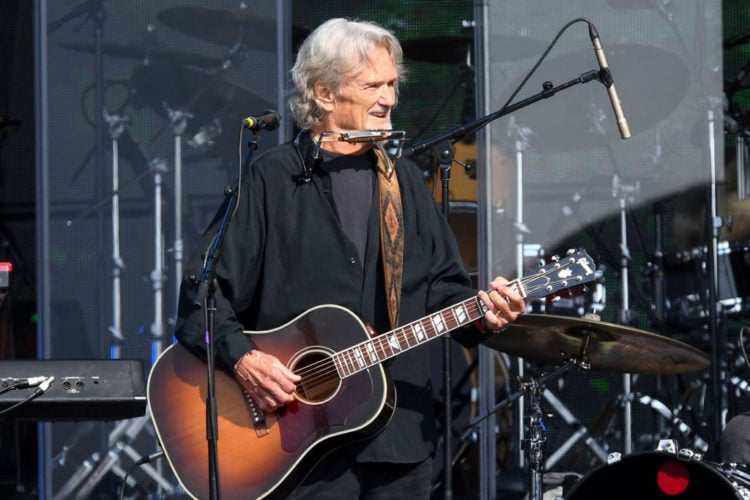 Even though he’s never enjoyed as much chart success as some of his contemporaries, very few artists can claim to have made quite so big an impression on the entertainment industry as Kris Kristofferson. His talents as a songwriter have led to his songs being covered by everyone from Johnny Cash and Elvis Presley to Janis Joplin and Willie Nelson, not to mention a place in the Country Music Hall of Fame. Here, we take a look back at some of his best-loved songs with our pick of the 10 best Kris Kristofferson songs of all time.

Kicking off our list of the best Kris Kristofferson songs of all time is Loving Arms, a duet performed between Kristofferson and his then-wife Rita Coolidge for their 1973 album, Full Moon. Released in August 1973, it became a minor hit, peaking at No. 86 on the Hot 100. In later years, Dobie Gray, Elvis Presley, Petula Clark, and Olivia Newton-John would all go on to enjoy hits with the song.

9. The Silver Tongued Devil And I

Kris Kristofferson’s debut album may have enjoyed a warm reception from the press, but it flopped in the charts. His follow-up, 1971’s The Silver Tongued Devil And I, fared much better, charting in the top 30 on the Billboard Top LPs & Tapes chart and peaking in the top five of the Hot Country LPs chart. One of its highlights is the titular track, a semi-autobiographical song that draws on Kristofferson’s reputation for turning into a silver-tongued devil around the ladies after a few drinks.

8. Lovin’ Her Was Easier (Than Anything I’ll Ever Do Again)

Unlike a lot of his early songs that got farmed out to other artists before he got a chance to record them himself, Kristofferson was the first one to record Lovin’ Her Was Easier (Than Anything I’ll Ever Do Again). Released as a single from his 1971 album The Silver Tongued Devil and I, it reached No. 26 on the Billboard Hot 100 and No. 4 on the Hot Adult Contemporary chart. A year later, country legend Roger Miller spent eleven weeks on the Hot Country Singles chart with his version, which peaked at No. 28.

When I Loved Her is another deeply emotional Kristofferson composition that proved a chart-topper for Ray Price. Kristofferson’s own performance of the song is a lot more rugged and unpolished than Price’s, but if anything, his ragged vocals only serve to enhance the heartbreak of the lyrics.

6. To Beat the Devil

An early example of Kristofferson’s gift for songwriting, To Beat the Devil was released on Kristofferson’s debut 1970 album, Kristofferson. According to Song Facts, the song is semi-autobiographical, drawing on Kristofferson’s early days in Nashville. It tells the story of a young songwriter who’s fallen on hard times. He wanders into a bar where he meets the devil, who buys him a beer, grabs his guitar, and sings him a song. The singer leaves, satisfied in the knowledge that while he may not have beaten the devil, he at least got a beer and a song out of him.

Described by countrythangdaily.com as the most popular country gospel song of Kristofferson’s, Why Me, Lord is one of the singer’s most personal songs. He was inspired to write it after attending a church service in which the pastor asked “Is anybody feeling lost?”, and “Are you ready to accept Christ? Kneel down there.” “It was just a personal thing I was going through at the time. I had some kind of experience that I can’t even explain,” he later recalled of how deeply the question shook him. Released as a single in 1972, it became his biggest hit as a solo recording artist, peaking at No. 1 on the Billboard Hot Country Singles chart and No. 16 on the Hot 100.

During an interview in 2013, Kristofferson revealed that Sunday Mornin’ Comin’ Down “opened up a whole lot of doors for me. So many people that I admired, admired it. Actually, it was the song that allowed me to quit working for a living.” Ray Stevens was the first to take it into the charts with his version in 1969. The following year, Johnny Cash turned it into one of the most iconic songs in country with his own interpretation.

3. Help Me Make It Through the Night

Help Me Make It Through the Night is one of the most sexual songs of its era. Fortunately, Kristofferson’s clever lyrics kept things subtle enough for it not to be slapped with a ban, and the song went on to earn Sammi Smith a No. 1 on the country charts (not to mention a Grammy) in 1970. Kristofferson later revealed that his inspiration for the song came from an interview Frank Sinatra gave to Esquire, in which he answered the question of what he believed in with the quip, “Booze, broads, or a bible…whatever helps me make it through the night.”

2. Me and Bobby McGee

Kristofferson’s inspiration for Bobby McGee came from a phone call to Fred Foster at Monument Records, who told him he was only calling as an excuse to speak to his secretary, Bobby McKee. Kristofferson switched McKee to McGee and thus created a modern classic. Roger Miller had the first big hit with the song, but it’s Janis Joplin’s version that remains the best known.

1. For the Good Times

Kristofferson wrote For the Good Times during a road trip to the Gulf of Mexico, drawing on his past experiences of the end of a love affair to create one of the most tender and romantic songs in country music. Like most of his songs, it was a hit for someone else before he got the chance to record it himself. In this instance, the lucky artist who got to put their stamp on it first was Bill Nash, who released a version in 1968. In 1970, Kristofferson recorded it for his debut. That same year, Ray Price took it to No. 1 – his first time at the top of the charts for 11 years. Since then, numerous artists have covered it, including Al Green and Perry Como.