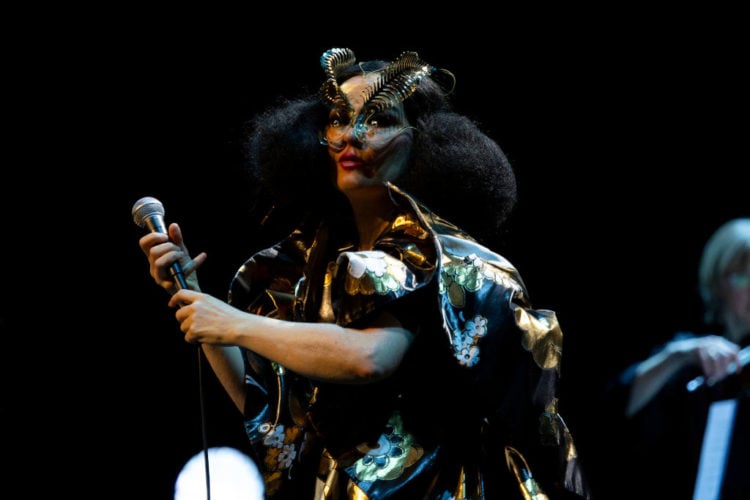 Bjork first started drawing attention during her time as the lead singer of alt-rock band, the Sugarcubes. After the band broke up in 1992, Bjork got to work on her solo career. A year later, she released her debut album, the aptly named Debut. It was an instant sensation with both critics and the public. Two years later, she followed it up with the even more remarkable Post. Since then, the singer has released a handful more albums, all unique, all wonderfully weird, and all essential listening. Here’s how we rank all the Bjork albums from worst to best.

Considering all of Björk’s progressive endeavors, it feels unfortunate that her most ambitious concept falls flat on its face. Alluring at times, and certainly impressive in its scope, Medúlla isn’t entirely without its merits. It’s just a shame that most people don’t necessarily want to listen to an album in which people shriek, whisper, and beatbox in place of instruments. An impressive effort, maybe, but not necessarily an enjoyable one. Despite that, it still managed to sell well, hitting No. 14 on the US Billboard 200, No. 9 on the UK Albums Chart, and entering the top 20 in numerous other countries.

There’s much to admire about Bjork’s 2007 album, Volta. The galvanizing Wanderlust and the ominous Vertebrae by Vertebrae are, artistically at least, jaw-dropping. The problem, as Slant Magazine says, is that none of it is much fun, even abstractly. There’s only so much weirdness that a listener can take, and Volta pushes most people past their limit within the first couple of tracks. It was still a huge commercial success, becoming her first and only album to reach the top ten on the Billboard 200 and selling over half a million copies worldwide in the first three months of its release alone.

Bjork’s seventh studio album was released in October 2011 to huge critical acclaim. Several publications named it the best album of the year, it got nominated for two Grammys, and debuted in the Top 40 of every chart it entered. Described by Mike Diver of the BBC as “mesmerizing” and “an amazing, inventive and wholly unique eighth album from an artist without peer,” it’s an album that delves into the dark side to chilling effect. The poppier moments sound incongruous, but those aside, it’s a remarkable album.

At over 70 minutes long, Utopia is an album that demands patience. It’s also one that deserves respect. The painful breakup that informed the theme of Vulnicura is again explored, albeit from a different angle (to give you an idea, Bjork referred to Vulnicura as her heartbreak album and Utopia as her Tinder album). The austerity and pain of Vulnicura are gone, replaced with a sense of playfulness and pleasure. Released in November 2017, it charted at No. 75 in the US and No. 20 in the UK, later receiving a nomination for Best Alternative Music Album at the 61st Annual Grammy Awards.

Vulnicura might not be Bjork’s best album, but it’s very possibly her most human. Bjork described it as “a more traditional album than Biophilia for what concerns songwriting. It’s about what may come to a person at the end of a relationship. It talks about the dialogues we may have in our heads and in our hearts, the healing processes.” Disorientating at times, overwhelming at others, but never anything less than rawly, desperately emotional, it met with widespread critical acclaim on its release, with many critics calling it her best work in a decade. It reached No. 20 on the Billboard 200 and entered the top 40 in multiple other countries.

For a singer known for her shrieks, Vespertine finds Bjork in an unusually hushed mood. Her voice barely raises above a whisper as she waxes lyrical about monogamy and domesticity. Lyrically, it’s one of her most straightforward albums yet, but she still manages to inject plenty of her trademark weirdness into proceedings, even creating micro beats from household sounds like cracking ice and shuffling cards. Released in August 2001, its intimate mood and sonic innovations met with critical and commercial success in equal measure.

Debut received a mixed reception when it was released, with British music critics praising it to the high heavens but American critics being more reserved in their praise. The public ate it up, sending it to No. 2 in Iceland, No. 3 in the UK, and No. 61 in the US. It’s since certified platinum in the US to become Bjork’s best-selling album in the country. It’s not a flawless album, and the ballads aren’t in the same class as those from her later projects. But the dance singles are epic enough to make the flaws seem utterly irrelevant. She’d go on to make better albums, but Debut remains an astonishing introduction.

For her second album, Bjork continued to delve into the same mix of electronic and dance styles she’d explored on Debut, but this time around, there are also touches of jazz, industrial, and ambient. An amazingly experimental album, it could have fallen flat on its face from the weight of Bjork’s ambition. Instead, it soared, even managing to outdo her stunning debut. What it lacks in cohesiveness, it makes up for in whimsy, with Bjork’s forward-thinking artistry bringing the disparate parts together into one magnificent whole. Released in June 1995, it peaked at No. 2 in the UK. No. 1 in Iceland, and No. 32 in the US.

On 20 September 1997, Bjork dropped her third studio album. Considering the strength of her two previous releases, expectations were riding high. To say Homogenic met them would be an understatement. Described by All Music as a “fusion of chilly strings, stuttering, abstract beats, and unique touches,” the album was on a different plane to its predecessors. In fact, it was on a different plane to anything else that was coming out at the time. Breathtakingly unique, wonderfully experimental, and beautifully conceived, it stands as one of the greatest albums of both its genre and its era.